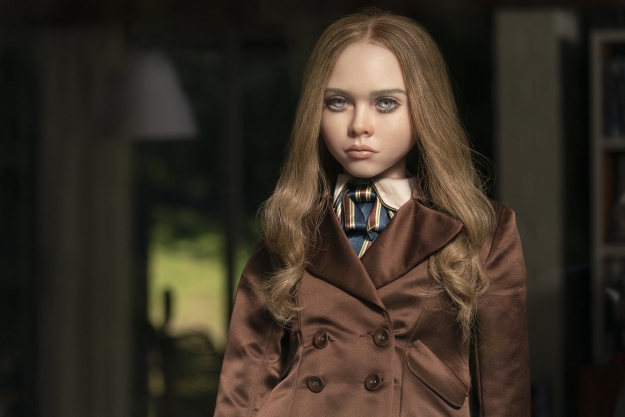 “M3GAN is a flawed but somewhat successful comedic thriller that, at the very least, cements Akela Cooper’s status as one of the horror genre’s most unique voices.”

M3GAN is an absolutely ridiculous film and, for the most part, it knows that. The new film from director Gerard Johnstone and Malignant writer Akela Cooper takes the killer-robot sci-fi subgenre to its silliest extreme — offering an experience that feels a bit like what would happen if Child’s Play and Ex Machina were to engage in an unholy union together. The film follows a similar narrative path as the latter, but does so with the irreverent, purposefully distasteful attitude of the former.

Whether or not that unique tonal cocktail works will undoubtedly vary from viewer to viewer, but M3GAN’s opening scene, which hilariously spoofs modern-day toy commercials, makes it very clear that the one thing no one should do is take the film too seriously. As far as creative decisions go, that’s an ingenious way for M3GAN to begin, especially given how progressively weird and silly the film gets once its eponymous, lifelike robot doll is actually introduced. That’s not to say, however, that the case the film makes for its own franchise potential is an entirely successful or convincing one.

Like most great horror movies, M3GAN’s premise is simple: When her parents are both killed in a tragic car accident, Cady (Violet McGraw) is forced to move in with her aunt, Gemma (Allison Williams). It isn’t long before Gemma realizes that she not only has no parental skills, but also very little initial interest in actually putting in the effort to build some. In response, Gemma, who just so happens to be a genius inventor, decides to build a toy that will be able to take care of all of her grieving niece’s needs.

The resulting toy is M3GAN, a robot covered in enough fake hair and rubber latex to look vaguely lifelike. Gemma pairs M3GAN with Cady and essentially begins to use her niece’s relationship with her latest invention as the trial that will prove to her toy company boss, David (Ronny Chieng), and a group of investors that M3GAN truly is the toy of the future. Unfortunately for Gemma, Cady not only begins to grow dangerously close to her new friend, but it also doesn’t take long for M3GAN to begin seeing any humans or animals that pose a threat to Cady as problems that need to be erased.

M3GAN, thankfully, presents all of these twists with its tongue planted firmly, almost painfully in its cheek. From her cringeworthy, American Girl-esque costumes to her habit of singing cliché, on-the-nose pop songs to Cady, M3GAN (as played by Amie Donald and voiced by Jenna Davis) is a worthy addition to cinema’s long line of notoriously evil toys. She’s slyly malevolent and unpredictable, a fact that’s proven when she decides to break out into a hilarious, unnerving dance just moments before she stabs one of her victims with the sharp blade of a paper cutter.

Cooper’s script wisely makes M3GAN an unmistakable product of the 21st century. She carries herself with such an air of toxic confidence that it’s impossible to believe her personality could have ever developed in such a way in a pre-#GirlBoss era of the internet. While M3GAN’s PG-13 rating prevents Johnstone from presenting the full, gory scope of the film’s violence, the director does an effective job of showing just enough of his murderous doll’s kills to make their impact felt.

Johnstone does not, however, bring much visual flair to M3GAN. Outside of its eponymous toy’s killer, aforementioned dance routine, M3GAN is a largely muted, static visual affair. That fact only makes the film’s slow, overlong first act feel all the more drab and meandering. Additionally, even though M3GAN rarely misses an opportunity to acknowledge the absurdity of its titular doll’s existence, the film isn’t packed with as many laughs or shocking kills as it could have — and arguably should have — been.

It doesn’t help that M3GAN is centered around Williams’ Gemma, a character who both reacts coldly to her niece’s arrival and barely seems to mourn the loss of her own sister. The film, whether intentionally or not, never makes much of a strong case for why Gemma is actually the right person to raise Cady, and Williams’ cold, guarded performance doesn’t help matters much. Gemma’s overall arc, consequently, never totally works, and her inevitable change of perspective doesn’t feel earned when it finally comes, either.

Through Gemma’s numerous flaws, Cooper and Johnstone do find ways to inject some surprising social commentary into M3GAN, most of which lambasts the ways that modern-day parents often use their kids’ digital devices to do some of their parenting work for them. The film’s relatively light social themes never totally overwhelm M3GAN, though, nor do they ever threaten to take away from its sense of silly fun. Opposite Williams, McGraw also manages to bring a small sense of emotional realism to the film with her surprisingly committed performance as Cady, the young girl whose emotional trauma essentially forms the foundation of M3GAN’s plot.

Chieng, meanwhile, turns in a memorably over-the-top performance as David, Gemma’s constantly frustrated, egotistical boss. Chieng is given many of the funniest lines in M3GAN, and it’s whenever he’s on-screen that the film is often at its comedic best. It is, of course, easy to see his fate coming from a mile away, but that’s the case with most of what happens throughout M3GAN’s third act, which is as violent and absurd as its story demands.

The film’s final 20 minutes send it out on an adrenaline-fueled high, though it’s hard not to view Johnstone and Cooper’s last-minute attempts to set up a sequel as superfluous. After all, while M3GAN does provide a fairly fun time at the theaters, it’s far from the kind of creatively striking or inventive success that would warrant any kind of interest in a sequel.

M3GAN is now playing in theaters. We also have a detailed explanation of M3GAN‘s ending.