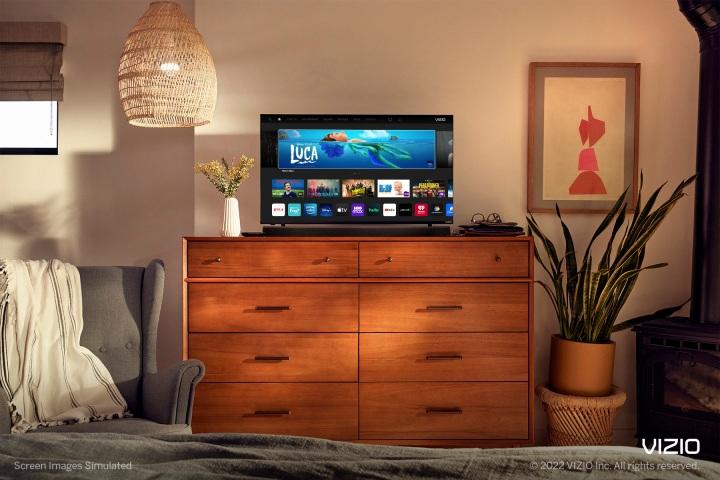 Vizio is a great brand if you want some fancy home theater tech on a budget. Vizio TVs might be lower on the price scale, but they have many of the same features as more expensive brands, like easy streaming and smart features. You can also find some really great Vizio TV deals, offering a competitive price. To make things easier, we’ve rounded up all of the best Vizio TV deals below, and we have some advice for you too!

If you need a small TV for your bedroom, dorm room or kitchen, a cheap Vizio is a classic option. It’s has a resolution of 1080p, which is great for streaming. After all, you can save the 4K experiences for a screen a little bigger than 32 inches. This TV still has a 60Hz refresh rate, so sports and gaming will look smooth and flawless. It has streaming services built right into it, so you won’t have to connect it to a streaming stick or a cable box — just plug and play!

The Vizio V-Series is a great option for all around performance on a budget. It’s a 4K TV with up to 60Hz refresh rate, making it great for sports or gaming. It even has a 10ms response time. While that’s not gaming monitor-levels, it will make for a smooth gaming experience. It’s powered using Vizio’s IQ Active processor, which is powerful enough to support HDR10 and active pixel tuning.

The Vizio M7 gives you almost everything you could want from a 4K TV. It has QLED, so you’ll get gorgeous colors from the full DCI-P3 spectrum and unparalleled brightness. This is enhanced using the Dolby Vision Bright Mode. The LEDs are in an Active Full Array with 32 local dimming zones. That means that dark areas will stay nice and black, even when they share the screen with bright objects. It’s contrast you can’t get through a standard LED panel.

Vizio’s P-Series is a gorgeous group of OLED TVs with some surprise bonus features. It starts out with OLED pixels, so you get amazing contrast between bright colors and pitch blacks. It adds to that with the Vizio Quantum Color engine, which is a variation of a QLED panel. That’s right, quantum dots and OLED pixels — the best of both worlds. The TV gets up to 1200 nits of brightness, and the screen has an anti-glare film on it, so you’ll get a stunning and clear picture even in well lit rooms. It has a bunch of bonus features that improve the home theater experience, like 4K upscaling, active pixel tuning and a 120Hz variable refresh rate.

How to choose a Vizio TV

Cheap Vizio TVs are among the best values on the market for anybody shopping for a television, but considering how large the lineup is, there are a few things to bear in mind before you rush to grab the first bargain you see at the size you think you want. Before you dive into these Vizio TV deals, set your budget, determine what panel size is ideal for the room you’re going to put it in, and know what you’ll be using the TV for. Are you going to be mostly be using your Vizio TV for streaming TV shows and movies? Do you plan to watch live sports? Will you have Xbox, Nintendo, or PlayStation consoles hooked up to it for playing video games? All of the above?

Also, don’t assume that you should get the same size you have now. Televisions are thinner, lighter, and much cheaper than they were even five years ago, so it may not hurt to size up. You’re less likely to be disappointed with a larger TV than you are with one that ends up being too small. See our TV sizing guide if you need some help with this. Bear in mind that while 4K TVs are the norm nowadays, smaller ones around 43 inches and below still commonly feature 1080p Full HD panels. If you explicitly want 4K Ultra HD and the TV you’re eyeing is on the smaller side, make sure it fits that bill before you hit that Add to Cart button.

Although Vizio is one of the top value brands in the TV market, it also has some higher-end models under its wide umbrella. These more premium televisions boast enhancements like QLED and OLED displays, which utilize newer lighting technologies rather than traditional edge-to-edge backlighting to create a brighter picture with deeper contrast (e.g., blacks will look truly black, not dark gray). Some also have built-in modes purpose-designed for things like gaming, so look out for those additional features when shopping for Vizio TV deals depending on your needs and viewing habits.

If you’re shopping for cheap Vizio TVs for a budget-friendly home theater setup, for example, then you might want to consider upgrading to a QLED or OLED panel for a more cinematic experience. Thankfully, these aren’t nearly as expensive as they were when these LED technologies first hit the market a few years ago. You’ll find these panels on select models in the the Vizio P-Series, V-Series, and M-Series, and depending on size, you might even find some below $1,000 in your search for cheap Vizio TVs.