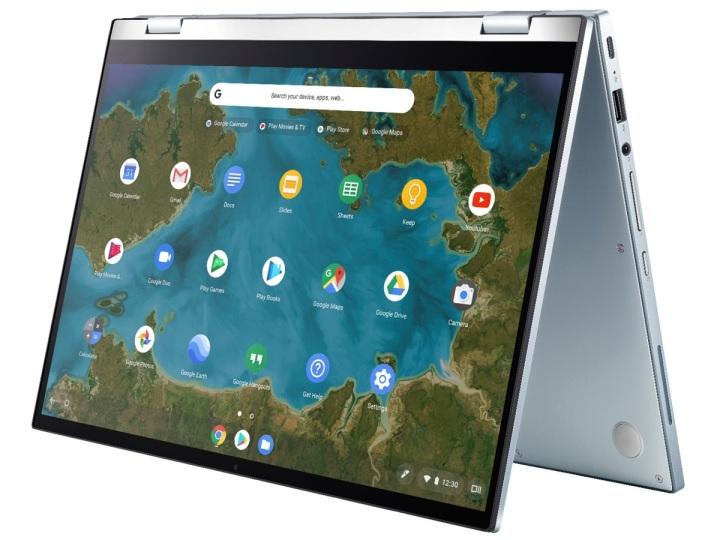 If you want a budget-friendly laptop or Chromebook, look to Asus. In 2022, you’ll see this brand’s logo on everything from beefy gaming laptops with cutting-edge hardware to featherweight 2-in-1 ultrabooks and everything in-between. One thing that hasn’t changed, however, is the fact that Asus delivers a ton of bang for your buck. If you’re in the market for a new PC and want to save some cash, you can do a lot worse than Asus laptop deals — but why spend all day scouring the web? We’ve already rounded up all the top bargains right here:

Convertible Chromebook deals don’t get much cheaper than this Asus Chromebook Flip C433. Offering everything you could need from a basic Chrome OS machine, there’s a lot to appreciate here if you simply want to get more work done while on the move and you’re happy to store most of your files on the cloud. It offers an Intel Core M3 processor along with 8GB of memory and 64GB of eMMC storage. That’s pretty good stuff for a Chromebook and just what’s needed. The storage means you’ve got room for ChromeOS and a few key essential files with the bulk of your content being saved on the cloud.

Elsewhere, the Asus Chromebook Flip has some nice extras. For instance, it has a 14-inch touch display that folds back on a 360-degree hinge. With a 1080p resolution, images look sharper while giving you more screen real estate than the 11- and 12-inch Chromebooks that populate this price bracket. An energy-efficient LED backlight proves useful as well. Weighing just 3.3 pounds, the Asus Chromebook Flip only measures 0.65-inch thin so it’s ideal for carrying around with you between different locations. It also has a built-in HD webcam with microphone for taking video calls, plus there’s a built-in media reader that accepts SD, SDHC, and SDXC memory cards.

Looking nice and professional, this Asus Chromebook offers decent battery life, too, so you’ll be fine to use this throughout the day whether you’re working from the office, coffee shop, or anywhere else. It’s a great all-rounder for anyone looking to keep costs down while still being able to work when out and about.

The Asus ZenBook 14 is a truly stylish-looking laptop for the price. It offers some features you wouldn’t ordinarily see in this price range, making it a tempting proposition. For instance, alongside its 12th-generation Intel Core i5 processor, it has 8GB of RAM, offering a 4GB increase over many cheaper systems. That updated CPU and extra memory means that it’s better at multitasking which proves useful when switching between different apps and tabs. You also get 256GB of solid-state storage space, so you’re not likely to run out of room any time too soon.

There’s also the Asus ZenBook’s 14-inch 16:10 OLED screen. Not happy with solely being large, it’s a 2.8K display so it has a resolution of 2,880 x 1,800 and gives you some extra screen space on which to get things done. The Asus ZenBook laptop features a sturdy build but remains quite sleek, weighing a little more than three pounds and measuring just 0.67-inch thick.

The Asus ZenBook 14 has some other neat features: It offers a nice big chiclet keyboard so you can type comfortably. Also included is an HDMI output port that lets you hook it up to a TV or monitor to give you evening more screen space. It’s all sufficient to make the Asus ZenBook 14 an attractive option, and the fact it looks pretty great for the price is a nice bonus, too. It’s ideal for working extensively on the move without missing out on viewing space, and is one of the more appealing laptop deals right now.

The Asus TUF proves that gaming laptop deals don’t have to cost a fortune to be worth your time. This one packs a lot of potential into its stylish shell that offers the aesthetic that many gamers want. It even has a backlit keyboard to light things up when you’re playing in low light conditions. Of course, none of that would matter if it wasn’t powerful where it counts, and the Asus TUF gaming laptop is pretty good for the price.

It has an 11th-gen Intel Core i5 processor along with 8GB of memory and 512GB of solid-state storage. That SSD is great amongst a field that often only offers up 256GB of space. With games taking up a lot of room nowadays, it should save you from having to reinstall games frequently. Alongside that, you also get an Nvidia GeForce RTX 3050 graphics card which is more than capable of handling newer games at decent settings, especially if you upgrade the RAM. It’s further helped by a 15-inch full HD display with a refresh rate of 144Hz so you don’t have to worry about motion blur when playing the fastest-moving of titles.

If you want to, you can always hook up the Asus TUF gaming laptop to another monitor or TV as well thanks to its HDMI output. Other ports include a Thunderbolt connection along with multiple USB 3.0 ports and a 3.5mm headphone jack. Ethernet support means you have the option for a wired internet connection, ensuring your connection never drops mid-game, too. It all comes together to ensure that the Asus TUF is a well-rounded gaming system for the price. With plenty to love, you’ll be delighted with the quality levels of the games you play with this system.

The Asus ROG Zephyrus 16 is a solidly reliable all-rounder and a good pick from the maker of many of the best gaming laptops. Thanks to its 16-inch 16:10 display, it gives you more screen real estate than most other gaming laptops, but it isn’t big and bulky. It weighs little more than four pounds while measuring less than 0.8 inches thick so it’s easy enough to store in a bag and take out and about with you. That screen is also pretty great, as it offers a resolution of 1,920 x 1,200 while also boasting a refresh rate of 144Hz so it can handle fast-moving action without a problem.

Fast-moving action will be the order of the day here, too, considering that this gaming laptop sports an Intel Core i7 processor along with 16GB of RAM. The latter is the sweet spot for gaming systems, proving much better than the standard 8GB of memory. You also get an Nvidia GeForce RTX 3050 Ti graphics card with 4GB of VRAM so you’re sure of a good time playing all the latest games at good settings.

It’ll be fairly easy to find room for those games thanks to the 512GB SSD that gives you plenty of space to install your favorites and more. The Asus ROG Zephyrus 16 gaming laptop is also good to go for use with an external display, as you can opt to plug it into a TV or monitor thanks to its HDMI output. This laptop looks great and offers pretty much all you could want from a gaming system that’s also great for productivity and all-around everyday use.

Knowing how to find the best Asus laptop deals and what to spend is an important part of the buying process. That’s why we’ve answered some key questions on the subject below.

When are the best Asus laptop deals?

The best Asus laptop deals tend to occur during the busiest sales events. Prime Day is one of the biggest such events of the year. Originally solely an Amazon thing in honor of its birthday, many other retailers now get involved, too, and launch their own concurrent sales. That means that the event happening in mid-July usually leads to some great deals and discounts.

Alternatively, Black Friday and Cyber Monday are good times to find the best Asus laptop deals, too. They happen straight after Thanksgiving but tend to be worth waiting for. Otherwise, smaller sales events like Memorial Day and Labor Day often bring many Asus laptop deals.

How much should you spend on an Asus laptop?

That entirely depends on what kind of Asus laptop you need. If you want a basic system solely for work, you don’t need to spend more than a few hundred dollars. That’s even easier to do if you’re happy to use a Chromebook rather than a Windows-based system.

However, if you’re keen to play games or need faster processing power, then you’ll naturally need to spend more. Spending nearer to $1,000 or more leads to faster performance as well as a better screen.

Figure out your budget and your core needs and work from there to figure out which Asus laptop deals are for you.

How to choose an Asus laptop

Asus computers run the gamut of design, features, hardware specifications, and price brackets. If all you’re after is a cheap Asus laptop, you’ve got plenty of options to choose from. You might want to consider a Chromebook if you’re on the tightest of budgets. These Chrome OS-based laptops are very cost-effective and Asus makes some very good ones. Note that Chromebooks are typically pretty basic when it comes to specs, though (featuring mobile processors and limited flash storage), so if you’re looking for something for heavier workloads or for gaming, a Chrome OS laptop probably isn’t the best choice.

That said, there are almost always Asus laptop deals to be had on cheap Windows machines at prices that compete with Chromebooks. On these, you’ll find more standard PC hardware like Intel Core and AMD Ryzen CPUs, the recommended minimum 8GB of RAM, and solid-state drives instead of skimpy eMMC flash storage. Cheap Asus laptops include the high-value VivoBook line, and some of these can be had for as little as $400-$500 when on sale (depending on hardware configurations). These are solid all-rounders for general everyday tasks like web browsing, streaming, emails, and maybe some light gaming.

If you’ve got a bigger budget to play with, the Asus ZenBook and ExpertBook stables contain sleek ultrabook-style laptops for more demanding users such as professionals, remote workers, or chronic multi-taskers. These boast slimmer overall designs along with impressive hardware, and select models offer additional bells and whistles like touch displays, 2-in-1 functionality, and even dual screens as found on the unique Asus ZenBook Duo. Touchscreen and 2-in-1 laptops are very good options for artists, graphic designers, and other creatives. You can sometimes find even these premium models on sale for less than a grand when shopping around for cheap Asus laptops.

Asus makes some very good portable gaming PCs as well. The Asus TUF and ROG (Republic of Gamers) lines include both reasonably priced as well as high-end gaming systems packing the latest hardware like Nvidia GeForce 16- and 20-series GPUs. The Asus TUF series falls on the more budget-friendly side of the price spectrum, with the ROG laptops like the Strix and Zephyrus packing beefier hardware and optimized displays for more serious gaming. These high-end gaming machines are the priciest members of the family but also offer the biggest potential discounts among the Asus laptop deals available online.