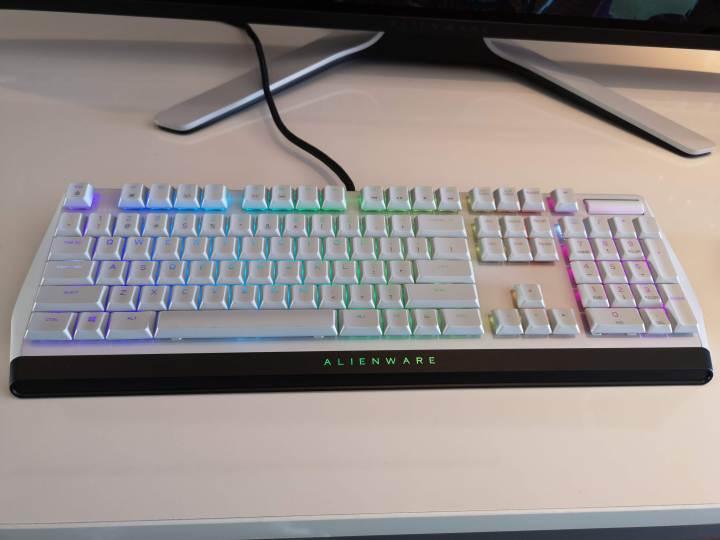 PC gamers around the world know about Alienware — the Dell-owned brand that’s ballooned in popularity within the gaming community. Every gamer recognizes the Alienware logo, as that little Martian’s head is seen on devices with premium design and top-of-the-line features. Alienware products don’t come cheap, but fortunately, there are laptop deals, monitor deals, and other kinds of offers that will let you enjoy significant savings. To help you out, here’s our roundup of the best Alienware deals that you can shop right now.

Every gamer needs a proper gaming keyboard, as a basic one won’t be able to keep up with all the action. You’ll need something like the Alienware AW510K, which gives you better control with quick triggers for every button press through the linear switching characteristics, low actuation force, and shorter travel provided by its Cherry MX Red switches. The gaming keyboard also features fully programmable keys for macros and key assignments, on top of a customizable AlienFX RGB lighting system per key that you can change through the Alienware Command Center. The keyboard’s switches are mounted directly onto the metal top plate for durability, while the enhanced ergonomics and slim form factor make sure that you stay comfortable even during hours-long gaming sessions.

The Alienware AW920H makes a run at the best gaming headsets with the crystal-clear sound that it delivers with 3D precision through Dolby Atmos Virtual Surround Sound technology. The gaming headset also comes with active noise cancelling, which will let you block all distractions around you so that you can focus on slaying that boss or pushing towards victory in a multiplayer match. There’s also an AI noise-cancelling microphone that reduces ambient noise to improve your communication with your teammates, which should help you win against your opponents. The wireless gaming headset can run up to 55 hours without needing to recharge, and plugging it in for just 15 minutes results in up to 6 hours of usage. The Alienware AW920H is also comfortable to wear with its leatherette memory foam earpads and firm-fitting headband.

For a gaming PC that will be able to run the best PC games without any issues, you should go for the Alienware Aurora R13. It’s powered by the 12th-generation Intel Core i7 processor and Nvidia GeForce RTX 3080 Ti graphics card, plus 16GB of RAM that’s considered by our guide on how to buy a gaming desktop as a good baseline for modern gaming systems. The gaming PC also comes with Windows 11 Home pre-installed in its 1TB SSD, which will have enough space for several AAA titles with all their DLCs and updates. The Alienware Aurora R13 features the brand’s Legend 2.0 design, which increases its internal volume by 50% for improved, tool-less accessibility for when you’ll eventually try to upgrade its components. The new design also prioritizes cooling through less airflow obstructions.

The best gaming laptops don’t sacrifice performance for portability, and that’s certainly the case with the Alienware m17 R5. Showcasing the improvements of AMD in the long-running AMD vs Intel rivalry, the gaming laptop has no trouble running the latest video games with its AMD Ryzen 9 6900HX processor and Nvidia GeForce RTX 3080 graphics card, and with 32GB of RAM, it can even take on the most demanding tasks in your professional life. You’ll be able to better appreciate the graphics of modern titles with the Alienware m17 R5’s 17.3-inch display with Full HD resolution, while Alienware’s Cryo-tech cooling technology maintains system stability through a dual-intake, quad-exhaust design and load-balancing heat pipes.

The Alienware Aurora Ryzen Edition R14 outclasses some of the best gaming PCs as it will let you skip reading the system requirements of games — the computer will surely be more than capable of handling any game that you want to play. Inside the gaming desktop are the AMD Ryzen 9 5900X processor, the Nvidia GeForce RTX 3090 graphics card, and 64GB of RAM, which combine for one of the most powerful machines in the market. It comes equipped with a 1TB SSD for its boot drive and a 1TB HDD for storage, with Windows 11 Home pre-installed. The Alienware Aurora Ryzen Edition R14 also features the brand’s Legend 2.0 design, and with the Alienware Command Center, you’ll be able to access thermal control, overclocking options, and AlienFX lighting settings.

When are the best Alienware deals?

You’ve already seen that there are some pretty great Alienware deals going on right now, and as always, there’s no time like the present. If you’re keen to treat yourself to a new monitor or gaming laptop, now is a fine time to do so. That’s even more relevant if your existing setup has failed or you simply need a new device right now for some other reason. But what do you do if you’re willing to wait in order to save even more cash? There may be better times later in the year to snap up one of the best Alienware deals.

For example: Prime Day. Celebrating Amazon’s birthday in the summer may have once been an exclusively Amazon-based sale, but many other retailers also get in on the action. It’s a really good opportunity to grab some pricey tech as electronics feature heavily among the deals. However, the absolute best time of year to shop is always going to be Black Friday and Cyber Monday. This massive sales event follows directly after Thanksgiving and always brings deep discounts on the latest technology. The downside? It’s an obvious one: It doesn’t happen until the end-of-year holidays, which don’t start until late November. That’s a long time to wait even if you are likely to save big. You might want to spend money on a great Alienware deal now rather than wait until later.

There’s also the issue of budgeting. If you can afford Alienware deals now, go for it. The holiday season and even the summer can be pretty expensive with trips and gifts to pay for. Buy now and you get to enjoy your new Alienware acquisition immediately without worrying about it cutting into your disposable income like it may during other seasons.

Ultimately, only you know when is the best time to buy but right now, there are certainly some sweet Alienware deals on tap. Time is money, after all, and waiting doesn’t always make things cheaper.