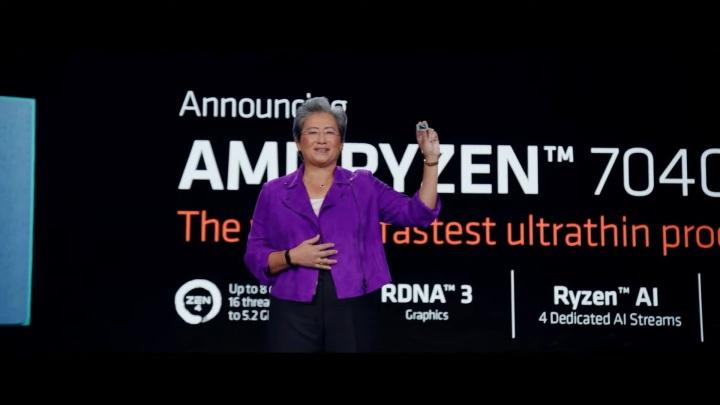 AMD, Nvidia, and Intel are the three rivals that power up countless desktops and laptops, and the components they produce make CES exciting every year. This year, each manufacturer had some major announcements to share, including new processors and graphics cards, both for desktops and laptops.

Here’s a recap of everything AMD, Nvidia, and Intel showed off during the last few days. Fair warning: there’s a lot to sink your teeth into. Now, the question is, who did it best at this year’s CES?

AMD certainly had a lot to talk about during its CES 2023 keynote. Team Red’s main focus this year seemed to be on laptops and the different solutions it can bring to that part of the market. Desktop users also got a long-anticipated confirmation of the upcoming 3D V-Cache Ryzen 7000 CPUs.

The company is making a strong entry into the laptop market for this generation of processors and graphics cards. When it comes to CPUs, the list seems to be never-ending, and it’s not even just Zen 4 parts. AMD is also resurrecting the Zen 3+ and the Zen 3 by bringing new chips to budget and efficiency-oriented laptops.

While the Ryzen 7030 and Ryzen 7035, which are Zen 3 and Zen 3+ parts respectively, received some coverage, AMD’s main focus was on the Ryzen 7040 and Ryzen 7045. Both the lineups are based on Zen 4 architecture, with Ryzen 7040 being aimed at ultra-thin notebooks and maxing out at eight cores. It’s the Ryzen 7045 series where the exciting stuff can be found, though. With a maximum of 16 cores, these CPUs will end up in some of the best gaming laptops of the year.

It’s not just Ryzen processors that are coming to laptops, but RDNA 3 graphics cards too. AMD is readying the RX 7600M XT and non-XT, said to rival the desktop version of Nvidia’s RTX 3060, as well as the RX 7700S.

Laptop fans have plenty to be hyped for, but desktop PC gamers should be on the lookout for not just one, but three Ryzen 7000 3D V-Cache chips. Initially debuted in the last-gen Ryzen 7 5800X3D, the technology had proved to be a win for AMD, and this time around, it’s coming to three CPUs instead of just one. We’re getting the Ryzen 9 7950X3D, with 16 cores and a massive 144MB of stacked cache, as well as the Ryzen 9 7900X3D and the Ryzen 7 7800X3D.

Nvidia managed to surprise many during this year’s CES. While the rumor mill had been buzzing with news about the RTX 40-series graphics cards coming to laptops for quite a while, most of us didn’t expect to see the full lineup so soon, and with the flagship RTX 4090 sitting atop the mountain of mobile GPUs.

In the last generation of GPUs (Ampere), Nvidia didn’t launch everything all at once, and the RTX 3090 never made it to laptops. This time, Nvidia is well-positioned to equip every kind of laptop with its hardware, ranging from budget notebooks to high-end gaming beasts.

Aside from the gaming laptop bonanza, Nvidia resurrected the “unlaunched” RTX 4080 12GB desktop graphics card and released it as the RTX 4070 Ti. The card retained the same specifications, but it received a $100 price cut, which means it now costs $800 and above. Check out our review of it to see how it compares to some of the other top graphics cards.

Lastly, Nvidia served up an update to GeForce Now, boosting the highest membership tier to an RTX 4080, now called the “Ultimate” tier. This even includes the addition of Nvidia Reflex to reduce overall latency, with Nvidia now claiming it’s on par with a desktop PC.

Team Blue also had a lot to say during CES 2023, although the vast majority of it is centered around CPUs. That should come as no surprise, but given the fact that Intel Arc Alchemist launched in 2022, it’s a shame that Intel didn’t have anything new to share about its successors. Instead, the news about Intel Arc Battlemage and Celestial was leaked on YouTube. At least Intel announced that XeSS upscaling is coming to its integrated graphics solutions.

The lack of GPU news may have been a letdown, but no one can accuse Intel of staying idle as far as its processors are concerned. The manufacturer is bringing out a boatload of new CPUs, and this includes desktop and mobile chips for all kinds of use cases.

First of all, Intel Raptor Lake is coming to laptops, and some of the chips are set to rival the best desktop processors on the current market. The mobile lineup includes the flagship Core i9-13980HX, equipped with a massive 24 cores, and the Core i9-13900HX, which we’ve already seen in a leaked benchmark prior to launch. Spoiler alert: it bested the Core i9-12900KS.

Nine HX-branded chips are coming out in 2023, and Intel expects over 60 laptop designs to feature a CPU from this lineup. There are also plenty more processors coming out, including H-, P-, and U-series chips that will be found in more power-efficient notebooks.

Desktop users have plenty to be happy about, too. Intel added a bunch of new CPUs to the Raptor Lake family, with a stronger focus on power efficiency. There are still some top-notch chips in there, such as the Core i9-13900, with slightly worse specs than the Core i9-13900K but also much lower power consumption. There are also six T-series processors which are ultra-efficient.

Who impressed us the most during CES 2023?

CES 2023 was truly eventful, and it’s not an overstatement to say that AMD, Nvidia, and Intel all had something interesting to bring to the table. Laptop users got a lot of love this time around, but those who prefer desktops still have some new hardware to look forward to. However, there have also been some small letdowns.

For AMD, the lack of new discrete desktop graphics is definitely a disappointment. With only the RX 7900 XT and RX 7900 XTX out right now, AMD doesn’t have a lot to offer in the way of GPUs. With Nvidia’s growing lineup, it’d be good to see some rebuttal from AMD, and that includes budget models as well as something stronger than the RX 7900 XTX. The lack of budget Ryzen 7000 CPUs also didn’t go unnoticed — we still don’t have a Ryzen 3 processor based on the Zen 4 architecture. On top of that, AMD’s presence on the laptop front seemed diminished from previous years, which isn’t a good sign for the company’s adoption there.

Nvidia surprised us with its massive bag of laptop chips, but much like AMD, it would have been nice to see more of an expansion of the desktop lineup. The launch of the RTX 4070 Ti was only a matter of time, but many PC builders are looking forward to the RTX 4070 (non-Ti) and the RTX 4060. Nvidia hasn’t said anything about either of those cards.

Intel couldn’t possibly have launched more processors in one go than it has this year during CES. There’s something in there for everyone, including laptop and desktop chips en masse. After all the hype Intel attempted to generate around its discrete graphics, though, the lack of any Intel Arc news was certainly a disappointment. In fact, Intel’s physical presence at CES was extremely small.

With all that said, who wins CES 2023? It’s tough to say. In terms of raw product, laptops powered by Nvidia and Intel were everywhere you looked this year, and Nvidia’s announcements around GeForce Now are exciting.

But in the end, it’s hard not to root for AMD. The 3D V-Cache parts are exciting, and the claims around the performance of the new mobile parts certainly seem impressive. Hopefully, we see more designs that support those AMD chips though, because right now, the laptop market has never seemed so dominated by Intel and Nvidia.