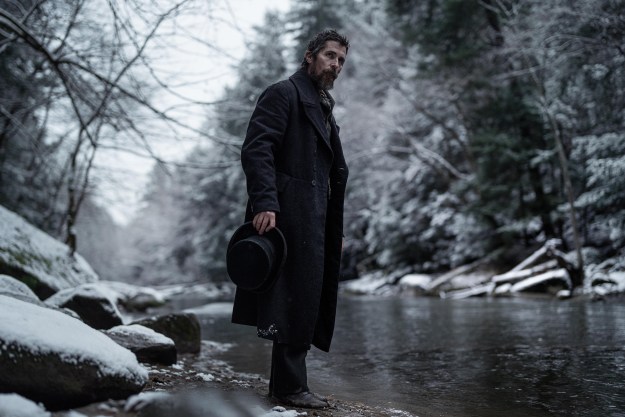 The Pale Blue Eye is a visually rich, intentionally tricky gothic thriller. It’s the closest director Scott Cooper has ever come to making a purely straightforward piece of genre entertainment, though the film does occasionally veer into the same overwrought, melodramatic territory that so many of Cooper’s previous films have inhabited. While it doesn’t linger quite as long on its brutality or violence as 2017’s Hostiles or 2013’s Out of the Furnace, either, The Pale Blue Eye is still weighed down by the ideas about masculinity that have been at the heart of every single one of Cooper’s directorial efforts.

That said, there’s a sense of playfulness present in The Pale Blue Eye that helps separate it from Cooper’s prior explorations of American tragedy. Most of that lightheartedness comes from Harry Melling’s big, go-for-broke central performance, which only further cements him as one of Hollywood’s more versatile working actors. Although Cooper frequently struggles to marry the jovial, irreverent nature of The Pale Blue Eye’s story with his own filmmaking sensibilities, the resulting film still emerges as a curiously endearing gothic adventure.

The Pale Blue Eye’s winking love for the macabre is evident in its opening shot, which slowly peels away several layers of fog to reveal the crooked silhouette of a dead man hanging from the branches of a bare tree. From there, the film, which is based on Louis Bayard’s 2003 novel of the same name, follows Augustus Landor (Christian Bale), a prickly private detective, as he is hired by a pair of West Point officials to look into said hanged man’s suspected murder. Along the way, Landor recruits the help of none other than Edgar Allan Poe (Melling), introduced as a young West Point cadet in The Pale Blue Eye, to help him unearth the truth of the film’s inciting death.

Before long, Landor and Poe find themselves investigating not just one death, but several, all of which quickly cause fear to spread throughout The Pale Blue Eye’s central, secluded version of 1830s New York. In true Edgar Allan Poe fashion, The Pale Blue Eye also combines its macabre detective story with a gothic love story that brings Melling’s Poe face to face with the beautiful but sickly Lea Marquis (Lucy Boynton). Poe’s relationship with Lea, along with Landor’s lingering grief over the public disappearance of his daughter, Mattie (Hadley Robinson), inevitably end up impacting both men in ways neither truly see coming.

What emerges as the real emotional core of The Pale Blue Eye isn’t Poe’s romance with Lea, but the father-son bond that slowly but surely develops between Melling’s boisterous poet and Bale’s mournful detective. Together, Bale and Melling make for a compelling, watchable pair. Bale, for his part, brings the same kind of gruffness and cynicism to his performance as Landor that he has in both of his previous films with Cooper. Fortunately, those qualities work well within the private eye mold that Augustus Landor is carved from. The Pale Blue Eye’s twisty final third also reveals layers to Bale’s performance that have the potential to make revisiting the film an even more rewarding experience than a first-time viewing provides.

Harry Melling, meanwhile, steals the show in The Pale Blue Eye as the film’s young, rebellious Edgar Allan Poe. Here, Melling is allowed to reenvision one of America’s most influential writers not just as a young man obsessed with death and the macabre, but also as a hopeless romantic who is just as eager to read aloud one of his original poems as he is to decode incomplete notes and hidden codes. Cooper, to his credit, effectively uses the juxtaposition of Melling’s lively energy and Bale’s somber performance to further highlight the subtleties of both stars’ performances.

Unfortunately, none of the other performances in The Pale Blue Eye work as well as Melling’s and Bale’s do. Despite featuring a murderers’ row of Hollywood character actors, including Timothy Spall, Charlotte Gainsbourg, Toby Jones, and Simon McBurney, many of The Pale Blue Eye’s supporting players either fail to match the tone and energy of Cooper’s script or are left stranded playing underwritten characters. The latter criticism is particularly true of Boynton’s Lea and Robert Duvall’s Jean-Pepe, both of whom aren’t explored deeply enough to become the interesting figures they could have been.

Cooper also struggles at times to nail down The Pale Blue Eye’s unwieldy tone. Outside of a few scenes featuring a ridiculously over-the-top performance from Gillian Anderson, the first two-thirds of The Pale Blue Eye cruise by fairly evenly. It’s in the film’s fiery third act, however, that Cooper seems to lose total tonal control over it. During one specific climactic set piece, Cooper attempts to ride the line between serious terror and gothic camp but fails to bring enough of either to the scene, which strands the sequence in an awkward tonal gray zone that never totally works.

Cooper does manage to partially recover from his third-act mistakes in The Pale Blue Eye’s game-changing final scenes, which paint the events of the film in an interesting new light. Bale and Melling’s lead performances similarly provide The Pale Blue Eye with a cohesive quality that helps smooth over some of the ripples caused by its tonal inconsistencies. Cinematographer Masanobu Takayanagi also creates an invitingly moody aesthetic that emphasizes every bank of snow and dark shadowy corner that appears throughout the film — imbuing it with a richness and visual density that its script may not match, but which nonetheless helps reinforce The Pale Blue Eye’s status as a satisfying, lightweight gothic thriller.