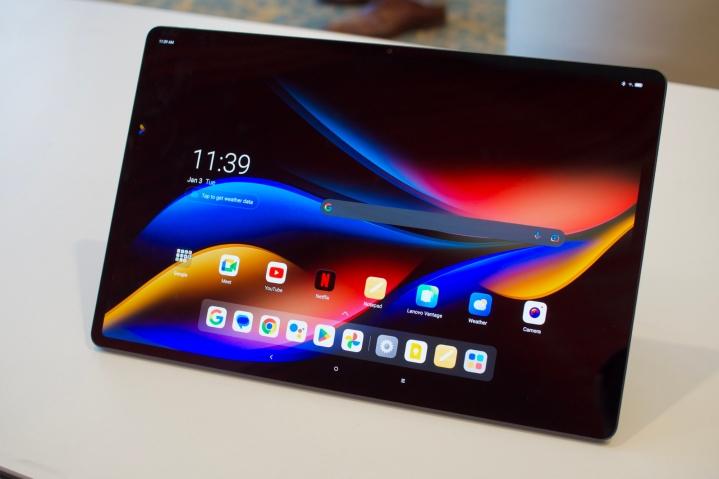 Android tablets are getting good again, as Lenovo announced at CES 2023 the Tab Extreme, a powerful Android tablet that’s made to handle everything in your life. A 14.5-inch behemoth that wants to replace your laptop, the Lenovo Tab Extreme looks to be one of Lenovo’s best Android tablets in years — though it’ll cost you.

The Tab Extreme is built to be productive, powerful, and playful. With the MediaTek Dimensity 9000 chipset, it should handle every app from Google Docs to YouTube — and multiple apps at once on that huge screen — with ease, while a 3K OLED display with a 120Hz refresh rate should make viewing media on it a really pleasant experience. There’s also support for Dolby Atmos, which grants more immersive viewing when you want to get deep into watching a movie.

As for accessories, Lenovo is bundling in a keyboard with a separate integrated kickstand, as well as a pen. The backlit keyboard will help you when typing out documents and emails — and it looks just like the Magic Keyboard for the iPad Pro with a floating hinge style that elevates the tablet up off of the keyboard itself for better ergonomics.

The keyboard itself is surprisingly good. Because the tablet is so huge (and a wide aspect ratio), you’re getting a full-sized layout; and the keys have good travel and response. The trackpad is a shortcoming, though — it’s big enough, but is overly sensitive and we saw no way to adjust the sensitivity in the settings (yay, Android on tablets!). The keyboard hinge is sturdy and the magnets holding the tablet are strong, but we felt like the range of adjustability on the hinge wasn’t quite wide enough; the display maxes out its movement a bit too vertical compared to where we’d normally put a laptop display.

The Lenovo Tab Extreme ships with Android 13, Google’s latest operating system. Lenovo’s P12 Pro was one of the few tablets Android 13 was tested, and the update was built especially to work well on large screens. And that’s good, because this is a large screen. Coming in over 14 inches, the Tab Extreme feels colossal compared to most traditional 13-inch laptops, which immediately knocks down any expectations of this being a portable device.

The Tab Extreme is cumbersome to hold given its size and weight, and feels much more at home on a desk or table, or at best propped up on your lap. The two-piece magnetically-attached keyboard and kickstand can easily be popped on and off, but you’ll be using one or the other a vast majority of the time. We’re a fan of having options, though — you don’t always want to have the full keyboard situation attached just to prop it up, and being able to drop that weight but retain a smaller kickstand is a welcomed addition. Double bonus that it so seamlessly integrates together.

The Tab Extreme’s 14.5-inch display may be on the larger side, but it’s still ideally positioned to take advantage of Android 13’s big screen improvements. That taskbar, for example, will fit right at home on the display. The new tablet-optimized home screen will fix one of the flaws with the P12 Pro.

Apps can be windowed and run side-by-side with slick multi-windowing interface, but even in the first few minutes of use we found core Google apps that couldn’t be popped into a window — to say nothing of third-party apps that we know tend to lag behind on updating for tablets.

Finally, the Lenovo Precision Pen 3 will help when taking notes with OneNote or Google Keep and drawing with the Play Store’s selection of apps (similar to how it works on the Tab P11 Pro Gen 2). It magnetically attaches to the back of the tablet, so it’s out of the way but easily within reach, but it’s left a bit exposed back there and more likely to fall off if you’re tossing this big tablet in a bag.

Lenovo’s Tab Extreme will go on sale for $1,200 later in the year. Yup, it’s an expensive tablet, but there are few in the Android world that can compete on this scale (literally) if you’re looking for something on the level of a laptop replacement device.

Google is working on a Pixel Tablet that feels like it could perhaps scratch this itch, though the price isn’t yet known. On the other hand, Samsung’s Galaxy Tab S8 Ultra is another option that’s on sale right now for a similar price. “You get what you pay for” goes both ways.