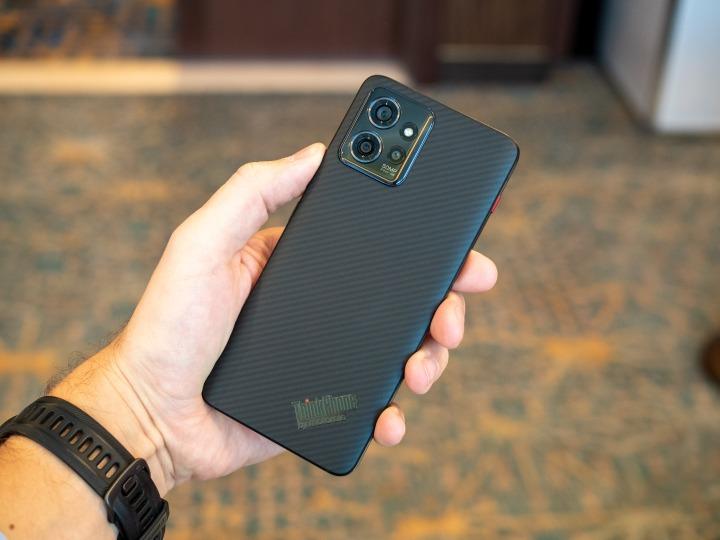 CES 2023 is not a show where you’ll see dozens of new smartphones, but don’t think that means there aren’t any at all in Las Vegas. While the Galaxy S23 and iPhone 15 are scheduled to come later this year, CES has still managed to bring a few surprises. Here are the best smartphones revealed at CES 2023.

Unfortunately, what is probably the most interesting smartphone at CES 2023 isn’t one we’ll be able to pop out and buy. The ThinkPhone by Motorola (to give it its full, rather awkward name) is part of the company’s push into the world of Business-to-Business (B2B) phones and is packed with software that makes it attractive to companies wanting to equip their staff with new devices.

It’s a shame, because not only does the design have a nostalgic feel in the way it reminds us of the classic IBM ThinkPad laptops of the 90s, but it also has great specifications. The excellent Qualcomm Snapdragon 8+ Gen 1 powers the phone, the screen is a big 6.6-inch AMOLED canvas with a 120Hz refresh rate, and there’s a 5,000mAh battery with 68W fast charging. Even the camera is tempting, with a 50-megapixel main camera with optical image stabilization (OIS), and a 32MP wide-angle camera.

The ThinkPhone by Motorola will be released in January, but to buy one, you’ll have to work for a company that’s bringing them on board as a work device. It may end up being a phone you’ll be lucky to spot in 2023.

No, this is not a precursor to the Galaxy S23 series. Instead, the Galaxy A14 is a $200 entry-level Galaxy phone, but the specification is strong considering the low price. It has a 6.6-inch screen with a 90Hz refresh rate, which isn’t commonly found at this price, but the resolution is only 720p. The 5,000mAh battery should keep the phone going for a while, though, plus there are three cameras on the back. However, you’ll only care about the main 50MP camera.

Perhaps more unusually, the Galaxy A14 has a 3.5mm headphone socket and a MicroSD card slot, plus it has Android 13 and 5G connectivity. It adds up to a phone that delivers most of what you need from a simple phone at a good price. It’ll be released in early January.

TCL’s 40 SE smartphone will be yours for just $169, and for that, you get a basic specification and a simple design. This doesn’t make it exciting, but it’s not supposed to be. It’s supposed to be a cheap phone, and it does that rather well. The 6.75-inch screen has a 90Hz refresh rate, which is great to see on such a low-cost phone, plus there’s a MediaTek Hello G37 processor inside with 4GB of RAM.

Like the Galaxy A14, there’s a 50MP camera on the back with two 2MP cameras alongside it, and there’s a 3.5mm headphone jack too. Android 13 is onboard, and there’s a 5,010mAh battery to power the device. There’s even a charger in the box. Not exciting at all, but decent for the price. It’s coming in the first few months of 2023, but not to the U.S.

OK, so this isn’t actually a phone, but it may form the basis of a phone in the future. Samsung’s Flex Hybrid is the name for a screen technology rather than a device, and it’s incredibly clever. It combines two future-phone screen technologies, folding and sliding, into one “device.” The left of the screen unfolds, and the right slides out. It converts the 10.5-inch unfolded screen into an even larger 12.4-inch display.

No, it’s probably not going to come to a real phone anytime soon, so don’t think we’re seeing a preview of the Galaxy Z Fold 5, but it’s exciting to see what Samsung is working on. Don’t forget, it wasn’t that long ago we were only seeing folding screens as concepts.

OnePlus sort of announced the OnePlus 11 at CES 2023, as the phone’s official launch coincided with the Las Vegas show, because the OnePlus 11 was shown off for the first time at an event in China. OnePlus will give the phone its global launch on February 7 but will release it in China on January 9. That means we’ve got almost all the details about it now, without much need to wait for next month.

That’s it for the smartphones at CES 2023, but you can also take a look at the best CES 2023 smartwatches and wearables, plus the quirkiest mobile gadgets at the show too.