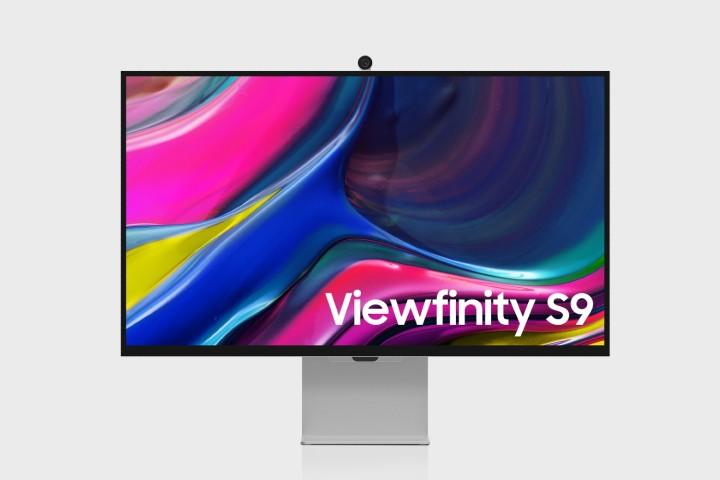 Although gaming monitors saw more attention this CES, there were still some other excellent monitors showed off on the convention floor. We saw multiple Apple Studio Display competitors, cheaper mini-LED options, and a few unique form factors. Here are the best monitors we’ve seen at CES 2023 so far.

Apple has had a monopoly on high-resolution creator displays, but Samsung is challenging that position with the ViewFinity 5K. It’s a direct competitor to Apple’s Studio Display, outfitted with a 27-inch screen and 5K resolution that produces a pixel density of 218 pixels per inch (PPI). Samsung has a couple of extra goodies, too. You don’t have to spend extra for a matte finish, for example, and although we don’t have an official price, it’ll probably cost less than Apple’s display.

It looks fantastic, and that’s due in no small part to a calibration feature that you can use along with your phone. It adjusts the colors for your panel and even gives you a report when you’re done, which is a process that is normally quite involved and requires expensive hardware. On top of that, you’re getting Samsung’s TV operating system, allowing you to use Samsung Gaming Hub, streaming apps, and even remote desktop.

Pixel density is all about stuffing more pixels on a smaller screen, and Dell’s UltraSharp 6K is aiming squarely at just that. It’s a 32-inch display with a 6K resolution, producing a pixel density of 223 PPI. Dell says it was aiming to capture the density you find in high-end laptop displays on a desktop monitor, all while ensuring excellent color accuracy for creators.

The contrast and HDR won’t blow you away. but the resolution will. The monitor looks impossibly sharp given its size, nearly doubling the pixel density of a 32-inch 4K display. Dell also includes a built-in 4K webcam and a nifty USB hub that you can flip down at the front of the display. Samsung’s ViewFinity 5K is challenging the Apple Studio Display, but the Dell UltraSharp 6K might be the winner for creators in 2023.

We’ve been waiting a long time for Asus’ ProArt OLED PA32DCM, and the final product doesn’t disappoint. It’s a 32-inch 4K monitor, and critically, it comes with an OLED panel. No, this isn’t the WRGB subpixel OLED we’ve seen with monitors like the Alienware 34 QD-OLED. It’s true RGB OLED with a response time of 0.1 millisecond.

It also boasts 10-bit color, 99% coverage of sRGB, and built-in hardware calibration so you can get the colors as accurate as possible. That’s all well and good, but it’s the stand on the OLED PA32DCM that really, well, stands out. It’s small and thin, allowing you to place the monitor nearly anywhere. Asus even includes a clip that go over the top of a cubicle, solving the issue of mounting a monitor without an arm.

If you want a bright monitor, the ThinkVision P27pz-30 (27 inches) and P32pz-30 (31.5 inches) are for you. They come in different sizes, but both offer a mini-LED backlight that’s capable of 1,200 nits of peak brightness. Combined with 1,152 local dimming zones, these monitors could offer some of the best HDR performance we’ve seen in 2023.

On top of that, it can deliver up to 140 watts of power over USB-C, so you can charge even some gaming laptops, and it supports USB4. Perhaps the most exciting development is the price, though. These monitors are still north of $1,500, but previous models sold for around $3,500. Mini-LED monitors have gotten a lot cheaper, and Lenovo’s new ThinkVision displays are a prime example of that.

Portable screens are usually pretty rough, but the Asus ZenScreen M16QHG is looking to change that. It’s a 16-inch 16:10 display that’s could be the perfect complement for portable gaming or even hooking up your phone to a larger display. Part of the reason why is image quality. It’s not a showstopping screen, but the ZenScreen M16QHG still supports HDR and covers 100% of the DCI-P3 color space.

It’s highly portable, too. There’s a kickstand built into the display that includes all of your connectivity, including HDMI, USB-C, and a headphone jack. The resolution isn’t bad, either. It tops out at 2,560 x 1,600. and it comes with a 120Hz refresh rate. Pack this monitor and an Xbox Series S when you’re traveling, and you have a serious gaming setup that you can fit in a backpack.

Finally, we have the Gigabyte M32U-AE, which doesn’t have a ton going on. It’s nearly  the same as last year’s Gigabyte M32U, but this time around, instead of a stand, it includes a monitor arm that you can mount to your desk. It’s a small change, but the arm goes a long way toward cleaning up clutter, and even better, Gigabyte isn’t charging a premium.

The M32U is one of the best 4K monitors you can buy, and that’s because it represents a great value. The image quality is decent, it’s 32 inches, and it comes with a 144Hz refresh rate. Importantly, it’s only $700, which is a downright steal for a monitor of this caliber. The AE version comes in at the same price, all while offering better cable management.