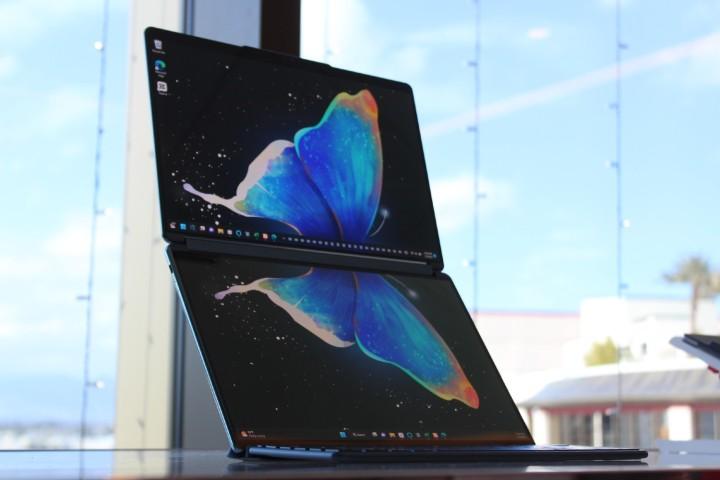 CES is the biggest laptop show of the year — and it’s not close. Dozens of new laptops get launched and updated, and every major (and minor) laptop manufacturer gets in on the fun.

This year was full of interesting concepts, some that stretch the definition of what laptops even are. I’ll save gaming laptops for another list entirely (because there’s a lot), but these are the best laptops from CES 2023 outside the gaming space.

Remember laptops with foldable screens? Yeah, that was so 2022. The Yoga Book 9i represents another take on that same concept, trading out the single foldable screen with two 13.3-inch 2.8K OLED screens connected by a hinge. And while you don’t get the smooth continuous experience of a singular screen, the YogaBook 9i definitely has some tricks up its sleeve.

First off, these two screens can stack vertically, held up by the origami stand. The two screens can also sit side-by-side, and lastly, it can be used in a classic laptop mode. You can use the detachable keyboard and virtual touchpad in this mode, but surprisingly, the haptic feedback touch keyboard Lenovo made just for this laptop is surprisingly good.

I was surprised by just how well-thought-out and premium this device is, especially with how strong all the magnets are. It’s certainly a niche product, but it’s undoubtedly a very interesting laptop.

The Dragonfly Pro Chromebook is easily the most premium Chromebook ever made. Last year’s Elite Dragonfly did a similar thing, but the Dragonfly Pro takes it one step further. First of all, it has an 8-megapixel webcam, which makes it the sharpest webcam ever put in a Chromebook like this. But that’s really only the tip of the iceberg.

Beyond the webcam, it has a high-resolution 2560 x 1600 screen, a haptic feedback trackpad, RGB backlit keyboard, four speakers, and four Thunderbolt 4 ports.

Performance looks good too, thanks to a base offering of 8GB of RAM, 256GB of storage, and a 12th-gen Core i5 processor. Again, for a Chromebook, it doesn’t get much better than that. You can expect to pay handsomely for a Chromebook of this type, but there’s no question this was one of the standout laptops from the show.

When I heard Asus was putting a 3D screen on a laptop, I couldn’t have been less interested. But when I sat down to actually demo this 3D screen on the ProArt Studiobook, I was thoroughly impressed. The glasses-free stereoscopic 3D effect is more than just neat — it was convincing. The 3.2K resolution, 120Hz refresh rate, and vivid OLED panel all help in that regard, and really make these images pop out from the screen.

Asus even had a demo set up that used a stylus that was tracked with a separate camera in 3D space, effectively letting me interact with objects on the screen, which was much, much cooler than I thought it would be.

Beyond the 3D screen, these ProArt StudioBooks are filled to the brim with high-end specs and advanced features, including a haptic feedback trackpad, the Asus Dial rotary control, up to 64GB of upgradeable memory, and the latest RTX 40-series graphics. Whether you opt for the 3D screen or not, you’re getting one of the more impressive and powerful-looking pieces of kit announced at CES this year.

But this time around, Lenovo has reengineered the hinge to “twist” a full 360 degrees. Now, there’s something we’ve never seen before. The idea is that with the ThinkBook Plus Twist, you can switch between the e-ink screen and OLED screen more easily, all without losing access to the keyboard and trackpad.

The design of the hinge may end up being more interesting than the product itself, but there’s no question this is a really innovative idea that took a lot of smart engineering to pull off.

OK, OK — I had to sneak one gaming laptop onto the list. And the reason is to highlight the incredible job Asus is doing to bring proper HDR panels to laptops in 2023. Through its Nebula HDR program, it’s putting more and more mini-LED displays on laptops, and the ROG Zephyrus M16 is the best of the bunch. It has 1,024 local dimming zones, which means brighter, higher-contrast screens. It’s not quite the 2,500 zones seen on the MacBook Pro’s Liquid Retina XDR screen, but it should be capable of some really stellar HDR performance nonetheless.

And more than anything, the Zephyrus M16 is just a really good sign for the Windows ecosystem as a whole. If it hopes to keep up with what Apple is doing with its Macs (or even what televisions are offering to console players), competitive HDR performance is key.

Lenovo calls it the Magic Bay, and essentially, it is a magnetic pogo pin connector right at the top of the display. The Magic Bay allows you to swap out different modules or accessories that can boost certain aspects of your laptop’s capabilities. Some examples include a Magic Bay 4K webcam, Magic Bay Light, and Magic Bay LTE.

Each of these accessories can be snapped onto the top of the laptop, just as a keyboard snaps onto the bottom of a 2-in-1 tablet. It’s a fascinating idea, especially since there’s no good way to build a 4K webcam or ring light into the top bezel of your laptop. These three Magic Bay accessories feel like the tip of the iceberg in terms of what could be offered if a laptop like this became popular, and I love seeing Lenovo adding modularity to a laptop design that wouldn’t otherwise be possible.