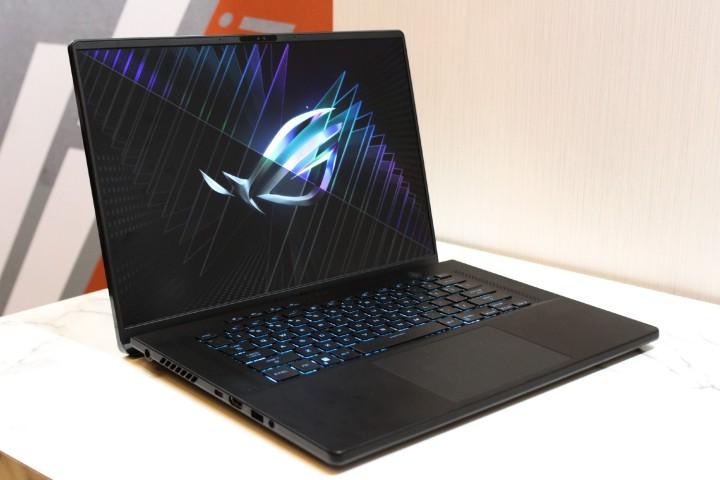 Gaming laptops have been a big deal at CES 2023. Thanks to the latest chips from Intel, AMD, and Nvidia, we’ve had a huge slate of new gaming laptops to check out at the show this year.

But the ones that stood out did more than just update to the latest RTX 40-series graphics cards. These are the devices that ventured into something new and presented an interesting new vision for the future of gaming laptops.

If there’s one gaming laptop this year that has some serious momentum behind it, this is the one. The ROG Zephyrus M16 is already a popular laptop, but this year it’s getting pretty serious overhaul. It has a new chassis that looks more refined, while also bringing over features like the customizable AniMe Matrix backlit lid.

Its panel has 1,024 local dimming zones, making it one of the best mini-LED panels we’ve seen on a gaming laptop. The benefit is a brighter, higher-contrast panel that should have much better HDR performance than your average IPS display. Asus says the Zephyrus M16 can get cranked up to 1,100 nits of peak brightness in HDR, which sounds pretty incredible. Based on what I’ve seen so far, the already-popular ROG Zephyrus M16 may end up being the go-to gaming laptop for HDR performance this year.

Razer came to the show with two brand-new gaming laptops, the Blade 16 and Blade 18. Unlike in previous models, Razer’s emphasis was on more performance, not just delivering a compact design. That’ll likely go over well with its fans, especially the extra-large, new 18-inch model. But the Razer Blade 16 is the one I’m most excited for. Razer says it has the most performance graphics power per cubic inch of any gaming laptop and 35% more than the average 16-inch gaming laptops available today. That doesn’t account for many of these same laptops jumping to an RTX 40-series GPU, but Razer assured me the Blade 16 would remain on top in this regard.

Most interestingly, the Razer Blade 16 features a “dual-mode” mini-LED display. That means you can switch between 4K 120Hz in its “Creator Mode” and 1080p 240Hz in “Gamer Mode.” On top of that, the Razer says the Blade 16 can hit up to 1,000 nits of brightness, which means it should also produce some great HDR performance.

The Razer Blade 16 also features a 16:10 display, the first of Razer’s gaming laptops to embrace the increasingly popular aspect ratio.

The Alienware x14 was already a unique gaming laptop given its tiny stature. It wasn’t the most powerful system in the world, but that was never its aim. The second-generation Alienware x14 R2 keeps the crown for being the thinnest gaming laptop on the market without changing dimensions, while still making some significant changes. The exterior of the device has been redesigned, now featuring an aluminum lid and embossed “X.” It both looks and feels really premium, despite keeping much of the Alienware design language intact.

Beyond that, the Alienware x14 R2 features an updated screen, now with a resolution of 2560 x 1600 and a 165Hz refresh rate. I don’t know that you’ll be able to play many games at the native resolution, but we don’t know exactly how powerful these latest RTX GPUs are yet. Speaking of GPUs, the Alienware x14 R2 is still maxed out at just the RTX 4060, due to the fact that it’s entirely powered by USB-C.

To keep things cool, the Alienware x14 R2 continues to use the same Thermal 31 thermal compound inside, but now applies it to both the CPU and GPU. There’s also a Dell-exclusive technology called Smart Fan that allows each of the two fans to spin up or down independently of one another.

MSI says the updated Titan will be the first of this new crop of mini-LED gaming laptops that you’ll actually be able to buy, while many others will arrive later in the year.

The ever-popular ROG Zephyrus G14 didn’t get a big redesign this year. However, there are two really important updates from Asus that significantly change the capabilities of this little gaming laptop. First off, we know now that configurations will be offered up to an RTX 4090, thanks to a switch from AMD graphics to Nvidia.

Those high-end configurations will no doubt be expensive, but should greatly expand the performance capabilities of this thin and light gaming laptop.

The second big update is the screen. A configuration is now being offered with a mini-LED screen, matching Asus’ Nebula HDR spec. While it only gets 600 nits of peak brightness compared to the 1,000 nits of the Zephyrus M16, it’s nonetheless a great addition to this already fantastic gaming laptop. The updated ROG Zephyrus G14 will likely be yet another hit in Asus’ recent run of popular laptops.

$999. That’s how much this new entry-level gaming laptop from MSI costs. You might be surprised to see a laptop of this type on this list, especially since that base price only gets you a 13th-gen Core i5 and an RTX 4050.

But let’s get real — times are tough right now, and I’m always on the hunt for gaming laptops that provide a solid value. And more than any other gaming laptop I saw at CES, the MSI Cyborg 15 looks like it could hit the sweet spot for buyers on a budget. MSI even says there will be an RTX 4060 model for just a couple hundred dollars more.

The MSI Cyborg 15 is a new design that has some interesting design traits, such as translucent side walls and bottom cover. They give the laptop a unique look, allowing you to take a peek into some of the internals.