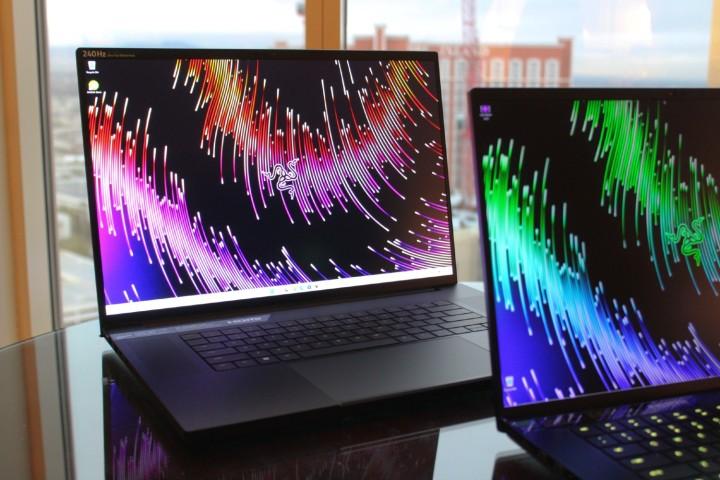 Razer has had a change of heart. It’s still pursuing its iconic thin-and-light design philosophy, but with the new laptops the company brought to CES 2023, there’s a new focus on performance.

That’s most evident with the new Razer Blade 18, which is the largest and most powerful laptop the company has ever made. Combine that with some really interesting new features for the Razer Blade 16, and you have a pretty compelling update to the lineup for Razer.

The Razer Blade 16 and 18 are both new to the lineup, and Razer hasn’t yet confirmed that they will replace the 15 or 17 entirely. They sure do look like full replacements. They come with 16:10 aspect ratio screens now (finally!), which dramatically cuts down the size of the bottom bezel.

They also feature the latest chips from Intel and Nvidia. Razer likes to keep performance configurations fairly straightforward, so all configs have at least 16GB of RAM and 1TB of storage.

Notably, you’re getting an option for up to an RTX 4090 offered on both laptops. Razer didn’t provide performance numbers but expects to get better performance on the 18-inch model with its redesigned thermal system. It now includes a larger vapor chamber and liquid metal cooling.

The Razer Blade 16 promises to be a powerhouse too. Razer says it has the most performance per cubic inch — in other words, it’s the most powerful for a laptop of its size. The cooling system hasn’t been updated this time, though — it’s an identical cooling system to the Razer Blade 15. The Razer Blade 16 also only has a marginally larger footprint over the current 15-inch model. Other features that have remained the same include the keyboard, webcam, trackpad, chassis, and ports.

But an area where it’s not identical, however, is the screen. The Razer Blade 16 has two unique things about it. First off, it uses a mini-LED screen, like many of the new crop of flagship gaming laptops in 2023, Razer has switched to a really stunning mini-LED panel capable of 1,000 nits of peak HDR brightness. Though it won’t be alone in this regard, the Blade 16 should have some pretty fantastic HDR performance, perhaps even better than the excellent OLED display featured on last year’s Blade 15.

The Razer Blade 16’s screen has one other neat feature up its sleeve. The top-end mini-LED model will have a dual-screen mode display, meaning it can switch native resolution and refresh rate. While using the laptop as a work laptop, you can enjoy the sharp 4K resolution and 120Hz refresh rate — and then, when you want to switch to gaming, you can drop it to 1200p 240Hz for even smoother animation.

It’s not the first time we’ve seen displays like this offered, but it does provide a no-compromise solution. The only caveat? The setting to switch between modes is in Razer’s Synapse software but requires a hard reboot to change.

The Razer Blade 18 doesn’t have these unique display features but sells itself on its bigger screen.

Beyond that, it does have a couple of advantages over its 16-inch sibling. It includes an Ethernet jack, which the Blade 16 lacks.

It also has a higher-resolution 5-megapixel webcam and a more advanced speaker system. It now has a total of eight speakers, with four tweeters and four subwoofers. The speakers are definitely an improvement over the previous models, but they didn’t blow me away on my first listen either.

Razer says all these quality-of-life improvements are to designate the Razer Blade 18 as a “desktop replacement.” In other words, it doesn’t expect you to lug the 7-pound chassis around or attempt to stuff it into your work bag every day. It’s no Alienware m18, but this is definitely a large laptop, and its success will likely hinge on its ability to perform.

With the mini-LED Razer Blade 16 on the table, though, I know which one I’d be more excited to play games on.