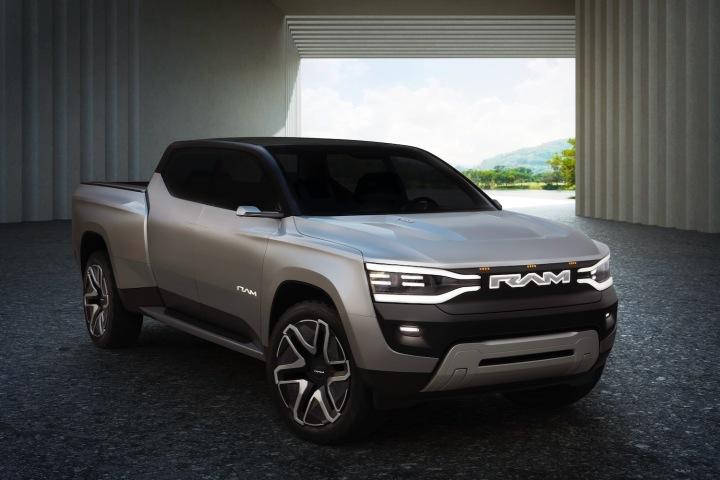 Electric pickup trucks are a hot trend in the auto industry, and Ram is late to the game. So the truck brand of massive automaker Stellantis needed to work hard to stand out.

Unveiled at CES 2023, the Ram 1500 Revolution BEV concept shows what Ram has in mind for its first production electric truck, which is scheduled to arrive in 2024. This concept version combines some features we’ve already seen on other electric trucks with a few clever new ideas. So while it may be revolutionary for the Ram brand, which is new to EVs, it’s more evolutionary when compared to other electric pickups. 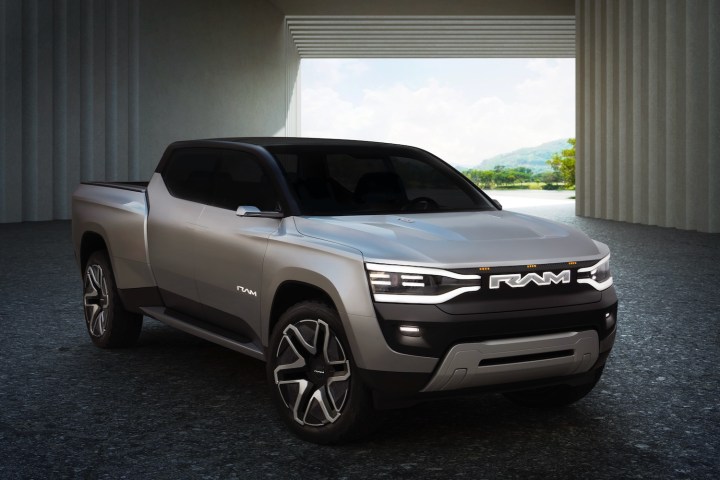 The Ram 1500 Revolution has the bulky appearance of a traditional truck, but with proportions that clearly mark it as an EV. With no need to accommodate an engine, the hood is much shorter. This allowed designers to make the cabin four inches longer than today’s internal-combustion Ram 1500 without shortening the bed, Ram claims. The grille is also smaller, although Ram compensated for this with a giant light-up logo and headlights with the same “tuning fork” elements as its current gasoline and diesel truck grilles.

The roofline is a bit lower and sleeker, which probably helps with aerodynamics, but like a traditional truck, the Revolution rolls on massive wheels and tires. The 35-inch tires are wrapped around 24-inch wheels with smooth covers and light-up elements. The charge port, meanwhile, is located in the driver’s side front fender. It makes a noise when the truck has started charging and blinks to show that charging is ongoing.

Like rival truck makers, Ram incorporated a frunk where the engine would normally be, plus the RamBox storage bins from its current trucks. Nearly every opening, including the tailgate, frunk, and charge port, is also power-operated.

Underpinning all of this power-operated convenience is the STLA Frame dedicated EV platform, one of four such platforms Stellantis plans to use for future EVs across its many brands, such as Chrysler and Jeep.

Many automakers have touted the packaging flexibility of dedicated EV platforms, but Ram has taken things a bit further. The Revolution BEV concept features third-row jump seats which, if they carry over, would make the future electric Ram 1500 the only three-row pickup in production.

The jump seats are part of a mid-gate system similar to what General Motors included on the Chevrolet Silverado EV and GMC Sierra EV, which dates back to GM’s gasoline-powered Chevy Avalanche and Cadillac Escalade EXT trucks from the early 2000s. It’s a pass-through that lets longer items extend from the bed into the cabin, but in this case, drivers can fold down those third-row seats when it’s not in use.

A second pass-through allows items to extend all the way into the frunk, meaning the Revolution can accommodate objects up to 18 feet long with its tailgate closed. Bollinger Motors previously showed something similar for its electric trucks, but their interiors were more Spartan than the Ram’s, and Bollinger is now focused solely on commercial sales.

The current internal-combustion Ram 1500 is already available with a fairly large 12.0-inch touchscreen, but the Revolution puts that to shame with two big screens, which combine for 28.0 inches of space. Mounted one on top of the other, the lower screen can be removed, while the upper screen can slide around on a rail system.

Shadow Mode allows the truck to follow behind a person on foot like a giant dog. The voice-activated feature, which sounds a bit like Tesla Summon to us, is intended for situations where a vehicle needs to be moved a short distance so that the driver doesn’t have to keep getting in and out.

Ram also claims a high enough level of automation for hands-off driving. The steering wheel retracts to provide additional space, but the wheel, seats, head-up display, and interior lights also “work together to provide next-level situational awareness to the driver” in case they need to take back control, per Ram.

The Revolution BEV concept can recover up to 100 miles of range in approximately 10 minutes using 800-volt, 350-kilowatt DC fast charging, Ram claims. Alongside the truck, Ram also unveiled a robotic wireless charger at CES that can automatically position itself under a vehicle and start charging. Ram wasn’t specific on production plans, however, and even if this device is sold to customers, it won’t offer the same power as DC fast charger.

The concept truck is propelled by two electric motors, one powering each axle. It also features air suspension and four-wheel steering with up to 15 degrees of articulation. Ram didn’t mention any trick features like the GMC Hummer EV’s Crab Mode, though.

Other specs weren’t revealed, but Ram boasts that its first production electric truck “will be the leader” in the key metrics of range, towing, payload, and charging time. That’s no small task.

By the time the production Ram 1500 EV previewed by this concept reaches showrooms, it will have to compete with electric trucks from Ram’s traditional rivals — Ford and General Motors. The Ford F-150 Lightning is already on sale and winning praise from critics and customers alike. GM is selling the 1,000-horsepower GMC Hummer EV and will soon follow that up with the GMC Sierra EV and Chevy Silverado EV, bringing electrification to its bestselling trucks.

Established automakers don’t have a monopoly on electric trucks. The Rivian R1T is perfect for outdoor adventurers, and Lordstown Motors recently launched its Endurance pickup, aimed at commercial fleets.

Ram can’t claim to be a leader in launching an electric truck. If anything, the big takeaway from the Ram 1500 Revolution BEV concept is that, with one of the last major holdouts getting onboard, electric trucks are here to stay. The revolution is happening.