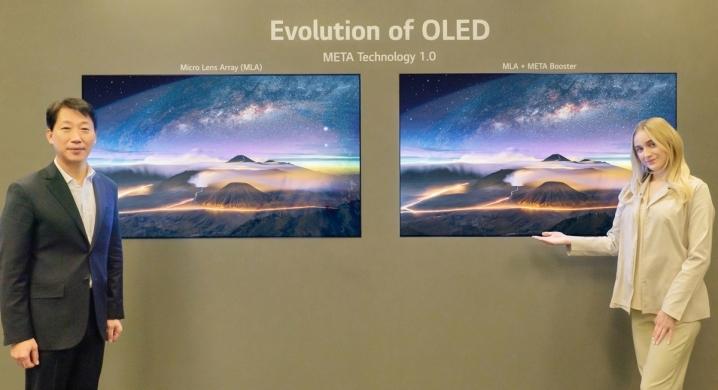 Both LG and Panasonic announced new OLED TVs with substantially brighter screens than their previous generations at CES 2023. In fact, they are up to 150% brighter in some cases, with peak brightness claims of 2,100 nits. LG credits the jump in performance to its Brightness Booster Max technology, and Panasonic says it’s using a Master OLED Ultimate module with a Micro Lens Array. What does all this actually mean? Here’s the explanation from the horse’s mouth.

One panel to rule them all

LG Electronics and Panasonic (and pretty much every other company that sells OLED TVs) get their OLED panels from LG Display, a dedicated division within LG’s giant enterprise that develops and manufactures displays. And even though there’s plenty of room for these companies to make their own unique tweaks — which explains why there can be noticeable differences in image quality from one manufacturer’s OLED TV to another — they’re all working from the same starting point.

For the 2023 model year, the starting point for flagship OLED TVs is LG Display’s third-gen OLED panel, which is based on something the company calls “META” technology.

Yes, it’s a little confusing. Meta is now the name for a new display technology as well as the name of the company formerly known as Facebook. To keep them separate, we’ll stick with LG Display’s all-caps formatting when referring to its OLED tech.

META, according to LG Display, is actually the combination of two discrete technologies. There’s a hardware component — the Micro Lens Array that Panasonic mentioned — and a software component, the brightness-enhancing algorithm known as META Booster. Together, they give LG Display’s new panels better brightness, better viewing angles, and even better energy efficiency.

OLED’s self-emitting pixels are the reason OLED TVs look so good, but the technology has struggled with achieving higher brightness for several reasons. It uses a color filter, which saps some of the light. OLED material itself must be managed carefully — pump too much energy into it for extra brightness and you dramatically reduce its lifes pan. And because of the layers of glass involved in its manufacture, some of the light it produces gets trapped via internal reflection — it’s essentially bounced back toward the panel instead of being emitted toward the viewer.

Samsung Display chose to attack the color filter problem by developing a version of OLED that uses quantum dots (QD-OLED), and we can see its impressive results in TVs like the Samsung S95B and the Sony A95K. But LG Display has chosen to address the internal reflection problem, and its solution is billions of tiny convex lenses layered on top of its OLED pixels.

The lenses in a Micro Lens Array are measured in micrometers. They’re so staggeringly small, LG Display can fit just over 5,000 of them over a single pixel or 42.4 billion on a 77-inch OLED panel.

According to the company, all of those tiny lenses successfully redirect the light that would normally be lost to internal reflection. That “saved” brightness is so substantial that LG Display claims the Micro Lens Array increases the panel’s efficiency by 22%. In other words, it takes less energy to produce the same amount of brightness as the previous generation.

From LG Display’s description, it sounds like the billions of tiny lenses are doing most of the heavy lifting when it comes to improving brightness, but the company says that its META Booster algorithm plays a role here too, especially as it relates to HDR. “It improves both screen brightness and color expression by analyzing and adjusting the brightness of each scene in real time. This innovative algorithm enhances HDR (High Dynamic Range), which represents brighter lights and deeper darks, to express more detailed and vivid images with the most accurate color expression to date.”

Another benefit of the Micro Lens Array is improved viewing angles. This is something of a surprise, inasmuch as OLED TVs are already leaps and bounds better than their QLED TV counterparts when it comes to viewing angles.  Normally, as you move off to the side of a TV, brightness begins to drop off, and distortion starts to creep in. Move far enough, and brightness can drop by half.

LG Display says it has managed to increase that distance by up to 30%, resulting in a viewing angle of 160 degrees. Is that a lot? Well, when you consider that the first-gen OLED panels were considered superb with an 84-degree viewing angle, we’d have to say yes.

Which TVs will get META?

So far, LG Electronics has said it will use the new third-gen META-powered panels in its 55-, 65-, and 77-inch G3 OLED evo models, and Panasonic announced that it will do so on the 55- and 65-inch models of its new MZ2000 OLED TV. However, Panasonic hasn’t sold TVs in the U.S. for many years and hasn’t said if it will bring the MZ2000 to North America.

That likely means Sony will be LG’s only real competition, but given that Sony has decided not to reveal its 2023 TV lineup at CES, it could be weeks or months before we find out for sure if it plans to use these new third-gen panels.

Still, if manufacturers are ready to embrace META OLED panels, LG Display says it’s ready. It plans to make the new screens in 55-, 65-, and 77-inch sizes at 4K resolution, and 77- and 88-inch sizes for 8K, eventually bringing the technology to its entire portfolio of OLED screens.