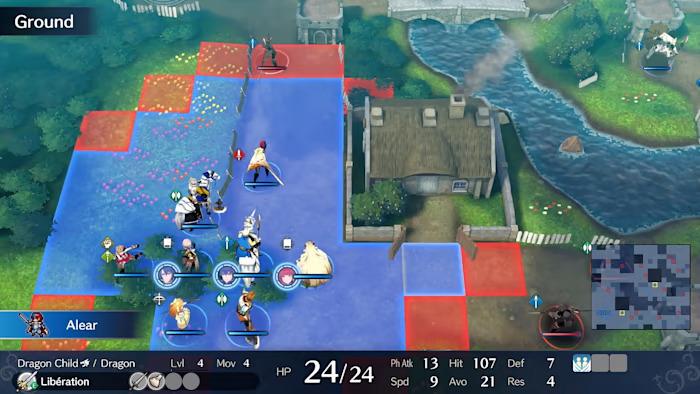 Given how long the video game development process takes, sometimes we don’t see the full impact of a game’s innovation until years later. That’s something I immediately noticed when booting up Fire Emblem Engage, the latest installment of Nintendo’s long-running tactics series. After a few hours with it, I could see how the project was likely conceived as a direct reaction to 2017’s Fire Emblem Heroes, one of Nintendo’s biggest mobile hits. Though 2018’s Fire Emblem: Three Houses was a major critical success for the series, Heroes seems to be the title that’s shaping Fire Emblem’s future five years later.

While that could wind up making Fire Emblem Engage a more polarizing release, I’m more than comfortable with that direction so far. Based on its first eight chapters, the RPG seems to be a more system-heavy installment that’s experimenting with how mobile hooks can fit into a console game (and without the overbearing monetization practices). It’s the series’ Pokémon Let’s Go moment, but it isn’t sacrificing complexity to get there.

If that introduction has you nervous, allow me to put your mind at ease: There are no radical changes in Fire Emblem Engage. It’s still an intricately designed and detailed tactical RPG with similar hooks as its predecessors. Whether you come to the series for its tense grid-based battles or eccentric characters, that’s all here in full force.

In its earliest chapters, Engage does an especially commendable job of easing me into its mountain of ideas, old and new. Some initial cinematics quickly get me up to speed with its new protagonist, Alear, a descendant of the Divine Dragon awoken to resolve an impending conflict in Elyos. Though it doesn’t seem like the most original story in series history, it’s at least one of its most visually alluring ones. My eye is immediately drawn in by its bright colors and smooth animations, all of which feel like an anime-infused step up from Three Houses.

Shortly after, I’m reintroduced to the usual rock-paper-scissors combat hook, which is as strong as ever here. Battles still retain their Chess-like appeal, as I strategically deploy and move my troops. More over-the-top battle animations help build each character’s personality while making critical hits especially satisfying. As for new innovations, I’m especially sold on its chain attack and guard system, which rewards players for thoughtful troop placement by letting them deal, or sometimes block, additional damage.

The complexity builds with each chapter, but in a way that’s exceptionally well-paced early on. For instance, players spend their time between battles in a hub world called Somniel. It’s a base of operations where they can farm materials, buy new gear, participate in mock battles, and much more. So far, new functions are added at a gradual pace that always allows me to get the hang of a new RPG mechanic or social activity before learning a new one. I get the sense that Somniel will build even more as the story progresses, making it feel like a thriving little community that I could spend an hour in between each chapter.

All of that keeps Fire Emblem Engage from ever feeling too intimidating for newcomers, despite building on everything the series does well. That welcoming attitude makes sense because I imagine Nintendo is hoping to convert casual mobile players with this entry.

Fire Emblem Heroes’ DNA is clear from the jump; in fact, it’s baked into the very story of the game. The central hook here revolves around summoning characters from the series’ history in the form of equippable rings. That gives the game the same flavor of fan service present in Heroes, creating a narrative reason to see characters like Marth and Sigurd again. Though more clever is that the system allows Nintendo to integrate a “gacha” system where players spend in-game currency to pull random rings.

So far, it’s a harmless idea that makes for an extra layer of RPG complexity. The bond energy needed to buy pulls or meld rings together to make more powerful ones is plentiful and easily earned by doing just about anything, from feeding your pet dog to exploring a map in 3D after finishing a battle. That emphasis on currency is another area where I can feel some mobile influence. There are hundreds of in-game achievements to chase, each of which grants some bond energy. That checklist progression hook very much reminds me of completing daily or weekly challenges in a game like Genshin Impact so I can grab more valuable currency. Importantly, none of this requires real money beyond the game’s retail price as far as I can tell.

I can see where this would feel more comfortable for people coming off Heroes, whereas Three Houses may have felt a bit alien. That’s where I’m reminded of Pokémon Let’s Go of all games. Released in 2018, Pokémon Let’s Go! Pikachu and Eevee were created as a way to bridge the gap between the mainline RPGs and the wildly popular Pokémon Go. It did that by integrating ideas from the latter, namely its more streamlined catching mechanic. Engage brings the same energy — though much more successfully — by putting an emphasis on random pulls, currency management, and to-do lists.

These aren’t just hollow ideas done for the sake of appealing to mobile players; they do still build on and often improve the RPG’s formula. Most rings act as basic accessories that provide stat buffs, but others are more special. Equipping Marth, for instance, will give players access to a special sword flurry attack that can deal tons of damage. Rings essentially introduce the idea of “ultimate abilities” into Fire Emblem, giving players another strategic decision to make in battle. When’s the right moment to summon a hero? When’s the right time to break out a special attack? Those decisions shake up the established flow of battle and bring some fun visual flair, to boot.

Characters can also level up their bonds with ring heroes, just as they can with other units. Doing so gives them access to passive abilities that can be bought with bond energy and equipped. That adds a strong extra layer of customization, as it’s encouraged me to switch rings around to give each character access to more buffs. I can create incredibly specific utilities for units as a result. Alear, for instance, barely ever takes damage as I’ve loaded her up with evasion skills gained from leveling up her bond with various rings.

I was skeptical about the fan service focus when I first saw Fire Emblem Engage, but I’m relieved actually playing through its first eight chapters. While its story has yet to fully draw me in, I’m having a great time experimenting with different character/ring combos. The various resources aren’t too complicated to manage and the checklist of achievements is constantly giving me little dopamine hits no matter what I’m doing. If this installment is Nintendo testing the waters with how much it can merge its mobile and console offerings, Engage seems like the best you could hope for with such a tricky experiment.