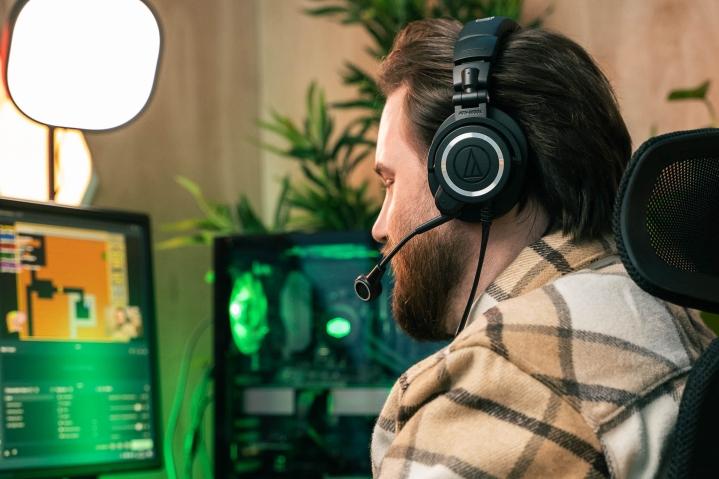 At CES 2023 in Las Vegas, Audio-Technica showed live streamers and content creators that it’s been thinking about them, today unveiling StreamSet, two new models of wired streaming headsets based on the iconic M50x professional monitor headphones, but with the added bonus of a built-in condenser microphone.

Dubbed by Audio-Technica as the “world’s first streaming headsets,” two models are available: the analog ATH-M50xSTS, which comes with a two-meter cable with a 3.5mm headphone input (with a 1/4-inch adapter, too) and a 3-pin XLR for connecting the mic to a mixer or compatible audio interface; and the digital ATH-M50xSTS-USB, which, as its name implies, has a USB-A ccable (also two-meters in length) with a USB-C adapter for direct connectivity to computers. The STS-USB model has a built-in digital-to-analog converter (DAC) with a sampling rate of up to 24-bit/96 kHz, and a feature that lets you hear your vocals in the headset and control the volume with a dial that sits on the earcup. Otherwise, both models are pretty much the same.

The important M50x lineage comes in the form of the critically-acclaimed 45mm large-aperture drivers that can be found in both headsets, which are widely known for their accurate sound reproduction, deep bass, and wide frequency response. Additionally, both StreamSet headsets come with two pairs of changeable earpads for different uses — the M50x-style fabric earpads that focus on sound isolation and audio quality, and a second mesh/leatherette pair that favor breathability and comfort for longer use.

Of course, the main tweak to the M50x comes in the form of the added cardioid condenser mic that sits at the end of a bendable boom arm. Incorporating tech from Audio-Technica’s own 20 Series microphones, condenser mics are known for their ability to accurately capture vocals and acoustic instruments with minimal background noise. The boom allows for easy positioning and can be muted when flipped to the up position.