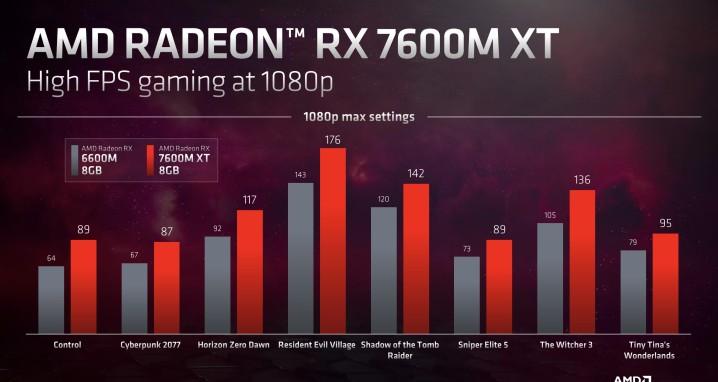 In AMD’s CES 2023 keynote address, it debuted its next-generation RDNA3 mobile graphics chips, and their performance and efficiency look to be incredibly impressive. We don’t have details on the entire range yet, and we want to conduct our own testing to verify performance, but AMD’s bold claims leave us rather excited for the year ahead, especially when these chips are launched alongside impressive onboard GPU performance in next-generation AMD laptops.

The AMD RX 7600M XT and non-XT versions will feature up to 8GB of GDDR6 memory on a 128-bit memory bus, with support for AMD’s smart power and tuning technologies, and are built on a 6nm process. AMD makes major claims about the performance of these GPUs, with the XT model reportedly able to deliver greater gaming performance than even an Nvidia desktop-grade RTX 3060 12GB. We’ll need to test that ourselves to verify it, but if true, next-generation mobile gaming laptops are going to be incredibly impressive.

AMD made no announcements for the high-end options. The last generation featured a 6800M, so we’d expect to see an equivalent launch of a 7800M or similar at some point later this year.

AMD is bringing back its S-series mobile graphics chip with this generation, combining RDNA3 performance with impressive efficiency. The RX 7700S will consume less than 100 watts, but still maintain high performance, while the RX 7600S will consume as little as 50W. If combined with the new-generation Ryzen mobile CPUs, these chips should enable thin and light laptop gaming performance with impressive battery life. AMD claims as much as a 29% improvement over the last-generation S-series counterparts, like the 6700S, across a range of games.

Some of the first gaming laptops to support these new M and S-series Radeon gaming GPUs include Alienware’s M18 and M16 models, Asus’ TUF Gaming A16, Emdoor’s APX970 and AG958P, and the IP3 ARN37A, all of which are scheduled to launch within the first half of the year.

Although there weren’t any new desktop GPU announcements from AMD, it did highlight how well its current 7900 XT compares to the Nvidia RTX 4080 12GB before it was “unlaunched,” suggesting that it should compete favorably against Nvidia’s newly announced RTX 4070 Ti just as well.