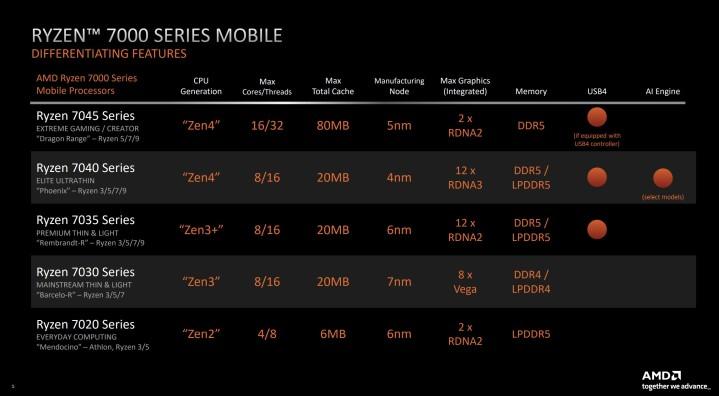 AMD’s CES keynote address contained lots of exciting details for new mobile graphics, but alongside dedicated RDNA3 mobile GPUs, AMD also has a range of onboard graphics options to tempt new laptop buyers. Throughout its new line of Ryzen 7000 mobile processors, AMD is leveraging all of its recent graphics architectures, including Vega and RDNA 2, with some of the top chips even getting access to as many as 12 RDNA 3 cores, for some incredibly efficient mobile gaming.

AMD is complicating its mobile CPU naming scheme this generation, so it needed a detailed slide to break it down during the CES 2023 keynote. This gave us a key look at the GPU technologies at play, highlighting that while Vega is still sticking around in Ryzen 7030 series processors — paired with a Zen 3 CPU core design — RDNA 2 will be much more prevalent. In the Ryzen 7040 series, RDNA 3 will also be available, alongside AMD’s much-teased AI engine, which may come in handy for FidelityFX Super Resolution (FSR) 3.0 in the future. Its more immediate use is in AI-driven noise cancellation, webcam video improvements, and additional layers of system security.

Considering AMD only debuted its Ryzen 6000 mobile processors a year ago, and has had such success with it and RDNA 2 GPUs, like the 680M, it’s perhaps no surprise to see it return as part of the Ryzen 7000 series. However, in the Ryzen 7035, we see enhanced versions of the Zen 3 architecture paired with up to 12 RDNA 2 cores, which is plenty for 1080p gaming, and will hopefully help keep costs down over the more capable, but expensive new-generation designs.

AMD showed off some performance numbers for these new CPUs running at a 28-watt power limit and delivering impressive gaming performance when compared with Intel’s best 12th-generation P-series designs. In some cases, the integrated graphics were as much as 181% faster than the Intel Core i7-1280P. In some titles, like Counter-Strike: Global Offensive, AMD’s leads were more reasonable at around 27%.

Last-gen Vega performance isn’t terrible, either, with the Ryzen 7030 Series reportedly making great strides against Intel’s 12th-generation mobile CPUs in gaming, too. AMD claimed up to a 69% lead in League of Legends, but a minor 3% loss in DOTA 2.

AMD pledged that some of the first Ryzen 7000 laptops would begin shipping in February this year, so if you’re looking to do some onboard gaming with the new processors, you won’t have long to wait.