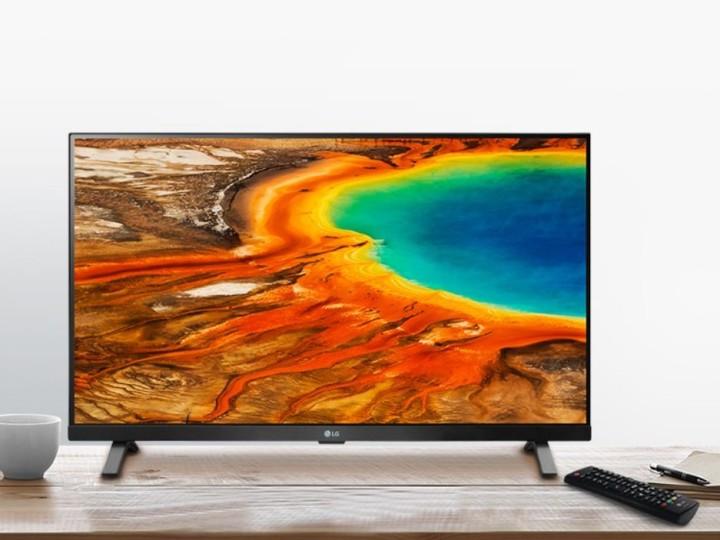 There are always a lot of 4K TV deals on offer from various retailers, but one thing you’ll consistently find is that some of the best TVs available come from the brand LG. Unfortunately, they can be pricey, so instead of hunting around all day for a bargain, let us save you some time and cash on your next LG TV purchase as we’ve already smoked out all the best cheap LG TV deals available right now and have rounded them up below. We’ve got a range of great new LG TVs, whether you’re after something large and cutting-edge or something more affordable.

Okay, look, this isn’t exactly a traditional TV, but it can be used as both a TV and a monitor, especially since it has an HDMI input, built-in dual 5-watt speakers, and Dolby Audio. It’s truly the best of both worlds as you could hook a computer or laptop up to it, too. It’s a 27-inch IPS panel that supports full HD at 1920 by 1080. It comes with a two pole stand, but it can be wall-mounted, as well, just like any other TV set.

It’s not a smart TV, so you’ll need to pair it with a console or another streaming system if you want to start watching your favorite movies and shows, but it does have a standard coaxial cable input — if you still use cable.

The wide viewing angle, unique cinema mode, stylish design, and true versatility make it an excellent choice if you don’t want a huge TV, or just need a little one for your office or bedroom. But then there’s the price, and let’s be honest, you’re not going to beat it right now. At the least, check it out!

Although QLED TV deals (and even OLED TV deals) are becoming more readily available, you still have to pay a premium for those more advanced panel technologies. For most people, a standard LED TV is just fine, and this LG 55-inch UQ75 Series 4K smart TV is a worthy pick from one of the best names in the business. At 55 inches, it’s a great size for small- to mid-sized living rooms and other common areas where a 65-inch or larger TV might overwhelm, and its screen, while a standard LED panel, still offers a 4K resolution so you can stream all of your content in crisp 4K Ultra HD. LG’s webOS smart software interface gives you easy access to all the popular streaming platforms like Netflix, Hulu, Disney+, and many others, and it’s compatible with Amazon Alexa, Google Assistant, and Apple HomeKit devices if you’re looking to add this TV to an existing smart home ecosystem. It may lack the bells and whistles of more advanced (and much pricier) models, but for the price, this is one of the best LG TV deals if you want a no-frills 4K smart television at this size.

Is 55 inches not quite big enough? Then this 65-inch LG UQ75 Series is worth a look. A 65-inch TV is arguably the best size for most living rooms, especially if you’re going to be sitting more than 5 or 6 feet from the television (and if you’re still not sure about this, be sure to consult our guide on how to figure out what size TV you should buy before you pull the trigger on your purchase). Like its 55-inch sibling, this 65-inch LG UQ75 Series packs a bevy of great smart features including the slick and intuitive webOS smart interface, HDR10 support, and a built-in Game Optimizer and Dashboard that makes it easy to enhance your TV’s picture for gaming. Along with all your favorite streaming apps, this television gives you access to more than 300 channels’ worth of free content right out of the box. If a 65-inch 4K smart TV is what you’re after, this is one of the best LG TV deals going right now.

For a truly cinematic home theater experience, consider a 75-inch television like this LG UP7070 Series smart TV, which is one of the biggest consumer-grade sets you can buy right now (and one of the best LG TV deals you’re likely to find at this size for less than a grand). The webOS platform offers support for all of the top streaming apps, letting you access all of your content libraries in an easy-to-use app interface, while the proprietary Quad Core Processor 4K delivers snappy performance and upscales non-UHD content so your legacy media will look better than ever before. TruMotion 120 technology provides a smooth, stutter-free picture during fast-paced sequences (think video games and action scenes), and the Game Optimizer mode further enhances your gaming experience by automatically adjusting the screen’s setting when it’s time to fire up your Xbox or PlayStation. If you have a compatible smart home device, then this TV also integrates seamlessly with Amazon Alexa, Google Assistant, and Apple HomeKit ecosystems. You can even access and control all your connected smart devices via the Home Dashboard. Even if you’re not part of the smart home crowd, though, you’ll find a lot to love with this up-sized LG 75-inch UP7070 Series 4K TV — especially at this price.

If you’re serious home theater enthusiast looking for a seriously top-tier television, then you should be looking at an 8K TV rather than a standard 4K model. We don’t know yet if 8K panels will ever fully replace 4K as the industry standard (as 4K did 1080p), but the fact is that the technology is here, and the 65-inch LG 99 Series 8K smart TV packs a lot of advanced technologies even beyond its incredible resolution. For starters, the display utilizes QNED display (LG’s name for its own quantum-dot Nanocell panels) along with mini-LEDs, combining two advanced technologies. The quantum dots capture and amplify light for a bright and vibrant picture, while the mini-LED technology uses smaller light-emitting diodes for a more precise lighting, deeper contrast, and increased dimming zones. Of course, all the streaming capabilities are there, too, with HDR, Dolby Vision, Dolby Atmos, upscaling for legacy media, and support for all the big streaming platforms. It’s still expensive (being the new technology that it is), but with a discount this massive, this is one of the best 8K TV deals on tap right now.