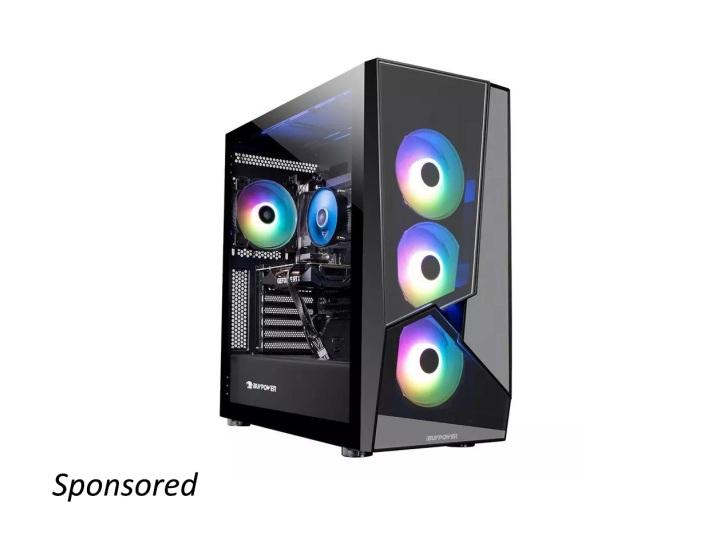 If you don’t know how to build a PC from scratch, buying a pre-built PC isn’t a bad idea. Pre-built gaming desktops have acquired a significant share of the market, with some of the best PC brands like Lenovo and HP launching reliable products. Interested, but you don’t know where to start? Don’t worry as we’ve got you covered — below are some of the best gaming PC deals that you can avail right now. Whether you’re planning to purchase an entry-level PC to enjoy free-to-play games or a high-end gaming machine to pair with the best 4K gaming monitors, you’ll surely find something that will catch your attention. Alternatively, check out our recommendations for the best gaming laptop deals if you need portability.

At a phenomenal price, with lots of power, and excellent for 1440p gaming, this iBUYPOWER is ready to rock. It has an Intel Core i7 12700F with twelve cores, 16GB of DDR4 RAM, and an NVIDIA GeForce RTX 3060 Ti graphics card with 8GB of GDDR6 dedicated VRAM. Plus, you get a 1TB NVMe solid-state drive, wired networking connectivity via Gigabit Ethernet, and multi-display compatibility. It’s all tucked neatly inside a stunning case, with plenty of fans and RGB to illuminate any dark dungeon. Windows 11 is pre-installed too, so you can unwrap it and jump right in.

The fifth-generation Lenovo Legion Tower 5i is a decent gaming PC for a relatively affordable price. It’s not as powerful as the best gaming PCs, but with its 11th-generation Intel Core i5 processor, integrated Intel UHD Graphics 730, the Nvidia GeForce RTX 3050 graphics card, and 16GB of RAM, it’s more than capable of running today’s most popular games at low to medium settings. It also comes with a 512GB SSD and a 1TB HDD, so you’ll have a lot of space for your games and all their necessary updates, plus Windows 11 Home pre-installed so can start using the computer as soon as you hook it up with your monitor, keyboard, and, mouse. Every purchase of the Lenovo Legion Tower 5i also comes with three free months of Xbox Game Pass, which will give you access to a massive library of games.

The seventh-generation Lenovo IdeaCenter Gaming 5i is ready to run the video games of today and the near future with its 12th-generation Intel Core i7 processor, integrated Intel UHD Graphics 770, the Nvidia GeForce RTX 3060 graphics card, and 16GB of RAM, which our guide on how to buy a gaming desktop describes as a good baseline for modern gaming systems. The gaming PC also has Windows 11 Home pre-installed in its 1TB SSD, three free months of Xbox Game Pass, and a Smart Power feature that will let you make adjustments to the system in order to balance speed and acoustics. There’s no shortage of ports and expansion slots on the Lenovo IdeaCenter Gaming 5i, so you’ll be able to connect all your accessories and make the upgrades that you want, while vent channels will make sure that it keeps cool at all times.

You won’t have a problem with today’s video games if you’re playing on the HP Omen 40L — a gaming PC that’s designed specifically for gaming performance. Inside its stylish chassis are the 12th-generation Intel Core i5 processor, the Nvidia GeForce RTX 3060 graphics card, and 16GB of RAM, which are capable of handling the most popular titles right now. There’s enough space for several AAA games on its 1TB SSD, which comes with Windows 11 Home pre-installed, and there are several USB Type-A and USB Type-C ports available for all of your accessories. The HP Omen 40L also features the Omen Light Studio, which makes it easy to customize the gaming PC’s lighting options with various effects.

Inside the Corsair Vengeance i7200 are a liquid-cooled 11th-generation Intel Core i7 processor, the Nvidia GeForce RTX 3070 graphics card, and 32GB of RAM, so not only will it be able to run the best PC games at the highest settings, but you’ll also be able to multitask between demanding apps if you’ll also be using the gaming desktop for professional purposes. It’s got a 1TB SSD and a 2TB HDD, with Windows 11 Pro pre-installed, and it’s ready to connect to multiple monitors with its three DisplayPorts and one HDMI port. Play games in style with the Corsair 4000D Airflow case, which has a tempered glass side panel to show off your RGB lighting that you can customize through Corsair’s iCUE software that can also monitor your system’s performance.

The CLX SET gaming desktop showcases the progress of AMD in the AMD vs Intel rivalry, with the AMD Ryzen 9 5900X processor combining with the Nvidia GeForce RTX 3080 graphics card and 64GB of RAM for powerful performance that’s ready not just for the video games of the future, but also for the most demanding workloads such as video editing. The gaming PC also features a 1TB SSD and a 6TB HDD with Windows 11 Home pre-installed, and a multi-display capability with three DisplayPorts and one HDMI port. If you want to try jumping into virtual reality, the CLX SET gaming PC is ready for the technology, and is compatible with the best VR headsets.

How to choose a gaming PC

As with any big purchase, make sure you know exactly what you want when buying a gaming computer. It’s not a bad idea to write down a checklist. It’s also important when looking specifically at cheap gaming PCs (i.e. those coming in at less than $1,000) to have realistic expectations — you’re not going to get multi-monitor 4K gaming at this price point. That said, it’s easy to achieve great results with 1080p/60 frames per second gaming at high settings even for modern releases, and even for 1440p gaming when you move toward the upper end of our $1,000 price limit.

If playing at 1080p/60 fps on one or two monitors is good enough, then you won’t have a hard time finding a good cheap gaming PC to meet your needs. If your demands are a bit higher, though, then expect to have to shop around a bit for the right deal. Also, be sure to bring yourself up to speed with the latest hardware — don’t just jump on the first attractive deal you find that meets your budget only to end up with a last-gen GPU that will feel long in the tooth. Know what you want and what to expect from a cheap gaming PC that’s within your set budget and you won’t be disappointed, and for a more detailed breakdown of the sort of hardware you should look for, read on.

The short answer is that a good price-to-performance ratio is what makes a cheap gaming PC “good,” and the good news here is that desktop computers already provide this sort of value by their very nature — it’s simply easier to fit all that beefy hardware into a desktop tower, whereas the scaled-down components of laptops (not to mention their built-in displays and keyboards) make those mobile PCs more expensive. That said, it’s still important to make sure you’re getting the most bang for your buck if you’re buying a pre-assembled desktop computer, as some are built better than others.

The three main hardware components that drive performance are the CPU, GPU (or graphics card), and RAM. Our recommendations: For your CPU, stick with an 11th or 12th-gen Intel Core or one of the newer AMD Ryzen (sometimes called “Zen”) processors. For RAM, a minimum of 8GB is recommended for all but the cheapest gaming PCs, and 16GB is even better — but remember you can almost always add more RAM and this is one of the easiest (if not the easiest) components to swap out. GPUs are arguably the heart of a gaming computer; modern models include AMD’s Radeon 6000 series as well as Nvidia’s RTX 30-series GPUs.

Nvidia replaced their older 10-series GPUs in recent years, but there are still cheap gaming PCs floating around with these cards. Our advice: Avoid them. Even the entry-level GTX 16-series Nvidia cards are faster and are ideal for 1080p gaming. For 1440p gaming, you’ll be better served with one of the RTX series cards such as the RTX 3060. If anything bottlenecks your gaming PC’s performance, it will be an underpowered GPU, so this is the one component you don’t want to skimp on. One final thing to consider is upgradeability: If you plan to keep your chosen PC tower for a while, look at what sort of case and motherboard it’s using to determine if you can easily add and swap parts in the future. Some desktop PCs from brands like HP use proprietary components which will limit what parts you can add and can be costly to replace.

Are gaming PCs good for work?

It’s safe to say that running modern video games at good settings is generally a much more demanding job than most work tasks you’d normally need a computer for, so any gaming computer — even a cheap gaming PC — will be as well-suited for work and study as it is for play. The faster processors and high-speed RAM will make short work of simple tasks like web browsing, word processing, making spreadsheets, and so on, and the discrete GPU is also nice to have for graphical tasks such as video rendering. Another advantage of a desktop PC, particularly one with a graphics card, is the option to create a multi-monitor setup that can increase your productivity (and even a single monitor will still give you more screen real estate than a laptop display).