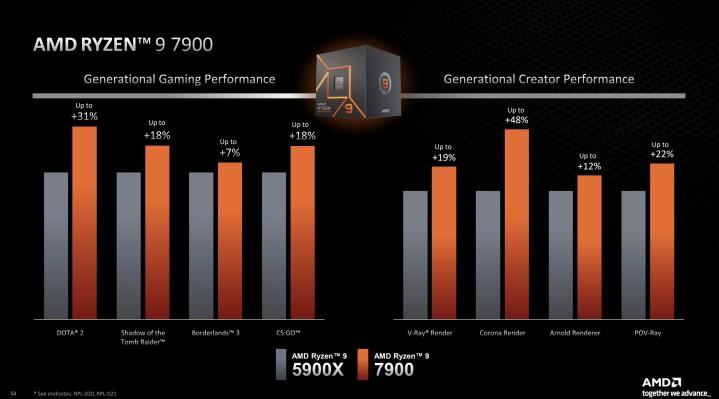 There’s no doubt that AMD’s Ryzen 9 7950X is an impressive processor, but AMD’s most recent generation hasn’t been off to the best start. Like it or not, AMD’s latest chips are expensive, require a lot of power, and run hot. At CES, AMD is looking to correct course.

The company introduced three non-X CPUs to go alongside its big, beefy Ryzen 7000 processors, and they address the problems with the latest generation point-for-point. They’re more efficient with a 65-watt power limit, but more importantly, they’re far cheaper than their X-branded counterparts.

Although the new processors are cheaper and more efficient, they still come with all the trimmings of AMD’s next-gen platform. That includes the AM5 socket, which AMD has promised support for through 2025, DDR5 memory, and PCIe 5.0 support. These processors use the same Zen 4 architecture, too — there aren’t any wild naming schemes afoot.

AMD is also bringing back its Wraith CPU coolers with these processors. The Ryzen 9 and Ryzen 7 will come with a Wraith Prism cooler in the box, while the Ryzen 5 comes with a Wraith stealth cooler. Although we always recommend a third-party CPU cooler, AMD’s bundled coolers are a decent option for budget builders.

Those are impressive numbers, but it’s no surprise that AMD is able to beat its previous generation. Compared to the Core i5-13600K, AMD says the Ryzen 5 7600 mostly matches Intel in gaming performance while consuming around half the power. In some games, such as F1 2021, AMD even claims a lead of up to 8%.

AMD says that these processors have a lot of additional power under the hood, though. They’re still unlocked for overclocking, and AMD showed that the Ryzen 7 7900 can have performance improvements of up to 34% simply by turning on the one-click Precision Boost Overdrive feature in AMD’s Ryzen Master software.

It’ll be interesting to see how the processors stack up to AMD’s current slate, especially since AMD is claiming up to 47% better efficiency for the non-X parts. Although AMD’s numbers are impressive, it’s important to wait for third-party benchmarks before buying a new CPU.

Thankfully, we should have those benchmarks soon. AMD says that non-X Ryzen 7000 CPUs will launch on January 10, just a few days after CES wraps up.