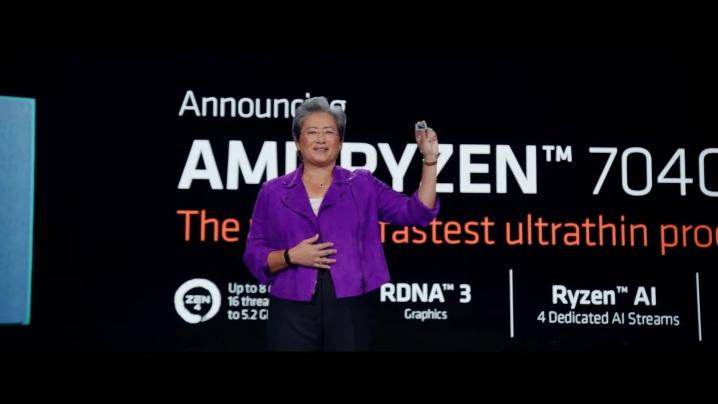 AMD’s CES 2023 keynote is over, officially kicking off the show (although, most of the major announcements are already out of the way). Team Red had a lot to share, including Ryzen 7000X3D parts, Ryzen 7000 mobile CPUs, and new RX 7000 mobile GPUs. To catch you up, here’s everything AMD announced at CES 2023.

AMD started off its presentation with a bit about its XDNA architecture, and critically, how it powers a new Ryzen AI engine in Ryzen 7000 mobile CPUs. AMD has a full stack available, but it highlighted the 7040 and 7045 series during its keynote. The 7040 series goes up to eight cores and 28 watts, and it’s built using the same Zen 4 architecture as desktop Ryzen 7000 CPUs. In fact, it uses the same chiplet design as desktop CPUs, just in different packaging.

Performance seekers are after the 7045 series, though. These processors climb up to 45W and 16 cores, and they’ll be available in high-end gaming and creator laptops. Interestingly, these processors come with RDNA 2 integrated graphics, while the 7040 series comes with RDNA 3 graphics. However, the RDNA 3 chips don’t use a chiplet design like their desktop counterparts.

AMD is bringing discrete laptop GPUs to market, too, including the new RX 7600M XT and non-XT. We don’t know a ton about this card yet, and AMD should release several more models in the coming months. However, the performance AMD is claiming could rival a desktop RTX 3060 if it’s true.

Alongside that GPU, AMD also announced the RX 7700S. It’s less powerful, with a 100W power limit, but AMD is still claiming a 29% increase in performance over the previous generation. It’s joined by the RX 7600S, but we don’t have benchmarks for that GPU quite yet.

In the previous generation, we only saw a single 3D V-Cache chip, the Ryzen 7 5800X3D. AMD seems confident in the tech to climb all the way up to 16 cores this generation, all while claiming generational improvements of 15% and a 10% boost over Intel’s Core i9-13900K. They arrive in February, so we won’t have to wait long to see if those claims are true.

Although AMD didn’t touch on it much in its keynote, it’s also releasing three new Ryzen 7000 processors that top out at 65 watts: the Ryzen 9 7900, Ryzen 7 7700, and Ryzen 5 7600. AMD says these parts are nearly 50% more efficient than their X-series counterparts. They aren’t more powerful, but AMD is still claiming around a 30% generational improvement compared to Ryzen 5000.

We should also see cheaper AM5 motherboards in the coming months. AMD didn’t say how they’ll be cheaper, but the company clarified that more B650 motherboards at more reasonable prices will launch soon. We’ll have to wait and see how that pans out.

Everything else AMD announced at CES 2023

Although we covered all of AMD’s major announcements at CES here, there was a lot more that went on during the presentation: