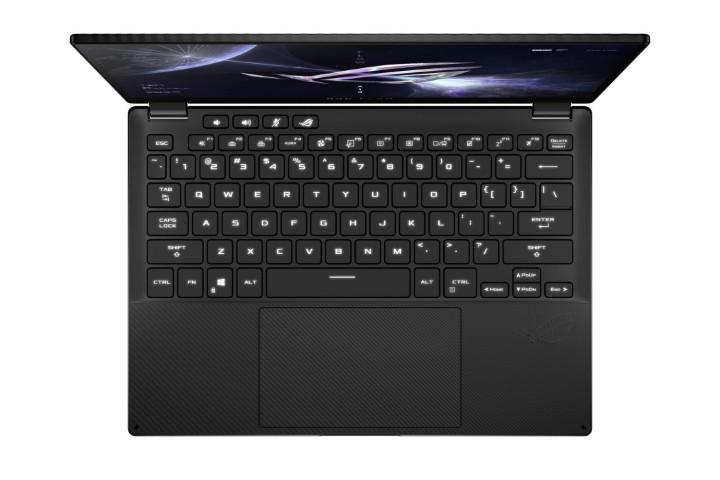 Asus has announced updates to its Flow family of ROG gaming laptops at CES 2023, including a full redesign of the Flow X13, improved graphics and screens across the board, and an updated XG Mobile external graphics card.

The Flow X13, the company’s gaming laptop with a 360-degree hinge, is the biggest news, though. The chassis has been shrunken down by 10mm from the original Flow X13, without having to shrink down the keyboard. Asus has even added extra battery capacity, going from 62 watt-hours up to 75 watt-hours. Battery life should be improved further by including both a MUX switch and support for Nvidia Advanced Optimus, which allows the device to automatically switch between taxing the discrete GPU and the integrated GPU.

The Flow X13 also features a “reimagined” hinge that allows for better airflow and a new grippy texture on the lid. Up above the screen is now a 1080p webcam and an IR camera for Windows Hello facial authentication — both new to the device in 2023.

As expected, the device will feature a next-gen Ryzen Zen 4 processor and RTX 40-series graphics. The previous model maxed out an RTX 3050 Ti, so I’d expect similar configuration options for this one.

Alongside the new Flow X13, Asus has also announced an update to last year’s Flow Z13, which is the 2-in-1 model that I was impressed by last year, even naming it the most innovative laptop of 2022. The Surface Pro-like design is still intact, but the internals have been bumped to the latest from Intel and Nvidia: 13th-gen processors and RTX 40-series graphics.

More importantly, the Flow Z13 now also gets a Nebula Display, meaning the 13-inch screen has a 1440p resolution and a 165Hz refresh rate.

The larger model, the Flow X16, has also received a sizable update, especially with its display. It can now be configured with a Nebula HDR mini-LED touchscreen, which can hit up to 1,100 nits of peak brightness. That should allow for some pretty incredible HDR gaming, brighter even than the OLED panels featured in the Razer Blade 15 or MSI Raider GE67 HX. Asus calls it the “best possible HDR experience available with an ultraportable machine.”

The Flow X16 also gets a bump to Intel’s latest Core i9 processors and RTX 40-series GPUs.

Lastly, Asus completes its Flow lineup with an update to the XG Mobile, the external graphics enclosure that can connect only to these three laptops via the proprietary port. This year, it’s been updated to the Nvidia RTX 40-series cards, adding even more performance when connected to one of these laptops. Like previous models, this still uses a laptop GPU, which is what enables it to be so small. But if you have a first-generation Flow X13, being able to pick up a 40-series XG Mobile should provide a significant uptick in gaming performance.

All of the ROG Flow laptops and XG Mobile will be available sometime in the second quarter of this year.