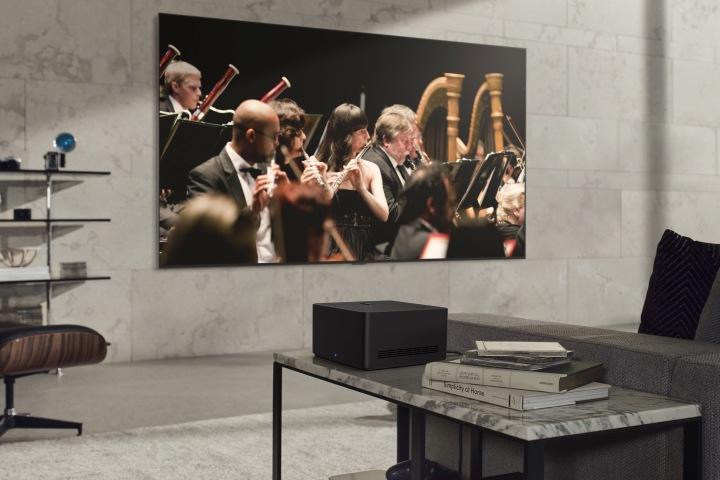 Wall-mounting a TV is no picnic, especially when that TV measures 97 diagonal inches. But LG’s new Signature OLED M Series TV could make that task much easier. The giant, 4K OLED TV uses LG’s Zero Connect wireless technology to effectively eliminate the need for any AV cabling from AV receivers, set-top boxes, soundbars, or game consoles to the TV. As long as the OLED M3 has power, it doesn’t need any other wires. LG is showing the M3 for the first time at CES 2023 but hasn’t offered any details on price or availability.

The M3’s wireless connection is powered by the included Zero Connect box — a cheekily-named gadget that is essentially the same device as Samsung’s One Connect box, except that the Zero Connect box uses a fully wireless connection to the M3 instead of Samsung’s thin umbilical cord. One, Zero … you get the idea. LG says the new box will have “multiple” ports for connecting devices, though it hasn’t said how many and what kind.

As such, any AV device you want to use with the M3, from gaming consoles to streaming media players, plugs into the Zero Connect box, which then relays the audio and video signals wirelessly to the M3. LG says you’ll be able to send up to 4K video at 120Hz, a critical spec for those who plan to use the M3 for gaming. The whole show can be controlled via voice commands, but LG hasn’t indicated if the M3 will support third-party AI systems like Google Assistant and Amazon Alexa, or if it will be limited to LG’s own voice system.

When wall-mounted, the M3 will be effectively flush to the wall thanks to LG’s new One Wall Design, a feature it shares with LG’s new G3 OLED evo TV. One Wall Design presents no visible gap between the TV and the wall, according to the company.

Many companies in the AV tech space have been playing with ways to send audio and video wirelessly to TVs, and there’s no shortage of ways to do this with a normal TV, but this is the first time we’ve seen a TV manufacturer put all of its connection eggs in the wireless basket. This historical reluctance has likely been due to the nature of wireless signals — they tend to be highly susceptible to various kinds of interference — and the desire to avoid angry customers who can’t get reliable pictures and sound.

LG’s faith in Zero Connect’s ability to overcome these challenges stems from its research and development efforts. It says that it has developed an algorithm that “instantly identifies the optimal transmission path.” At the same time, LG claims the algorithm can recognize changes in the immediate environment – such as people or pets moving around the room – and switch its transmission path accordingly.

Still, there’s only so much an algorithm can do, and LG seems to acknowledge that M3 buyers may need to do some tweaking to get the system to perform the way it should: the box’s antenna can be rotated and/or tilted to better align with the TV’s location. In the provided photos, the Zero Connect box looks like it has a very clear — and very short — line of sight to the M3, which suggests that buyers will have to be very careful when choosing a location for the box.

As soon as we get the full specs on the M3, we’ll let you know. But the big question — can the M3 deliver a truly reliable and lossless wireless stream of multichannel audio and 4K video from a box to the TV? — we likely won’t know for sure until we get one in for testing.