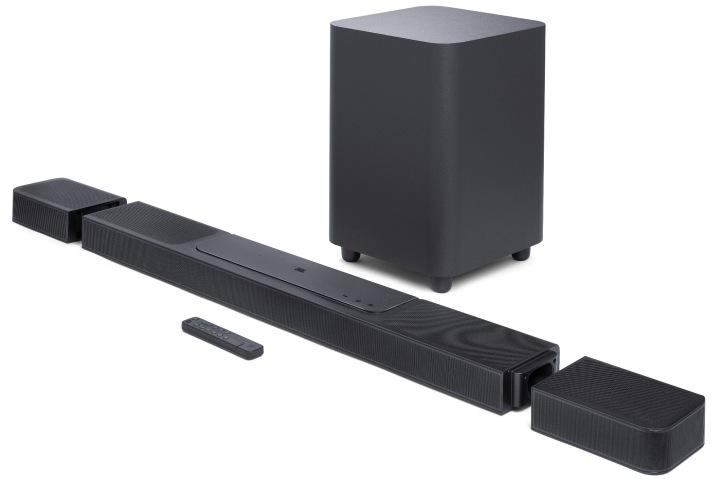 JBL has taken the wraps off its most powerful Dolby Atmos soundbar to date at CES 2023. The Bar 1300X follows the same design principles as the company’s previous top-of-the-line Bar series soundbars, including the line’s signature detachable, fully wireless surround speaker modules, and a wireless subwoofer. But the Bar 1300X brings even more sound and power to your TV room, with an 11.1.4-channel configuration and a massive 1,170 watts of total power. It will be available on February 19, 2023, for $1,700.

The JBL Bar 1300X boasts both Dolby Atmos and DTS:X compatibility, but what sets it apart from JBL’s other Atmos/DTS:X soundbars is its six dedicated up-firing drivers, which will presumably do a better job of delivering the height channel effects that these 3D surround sound formats are known for. It also has the largest wireless subwoofer in the Bar range, with a 12-inch driver.

JBL says that dialog clarity is a special strength of the Bar 1300X, thanks to Harman’s PureVoice technology, which is designed to keep voices clear, even when background sounds get loud.

The detachable speakers have their own internal rechargeable batteries, which gives you the option of placing them almost anywhere you can find a flat surface (they can also be wall-mounted). The included AC adapters give you the option of using them like powered wireless speakers, or you can dock them to the ends of the Bar 1300X, where they will boost the power of the man soundbar while they recharge.

Also new for 2023 is the JBL One app. It gives you control over customized EQ settings and lets you stream music via Wi-Fi to JBL’s soundbars from the app’s collection of integrated streaming music services. The Bar 1300X also has a variety of other streaming connection options including Bluetooth, AirPlay 2, and Chromecast Built-in. It’s compatible with Google Assistant, Amazon Alexa, and Apple’s Siri, and can be controlled as part of a multiroom system via the Alexa app.