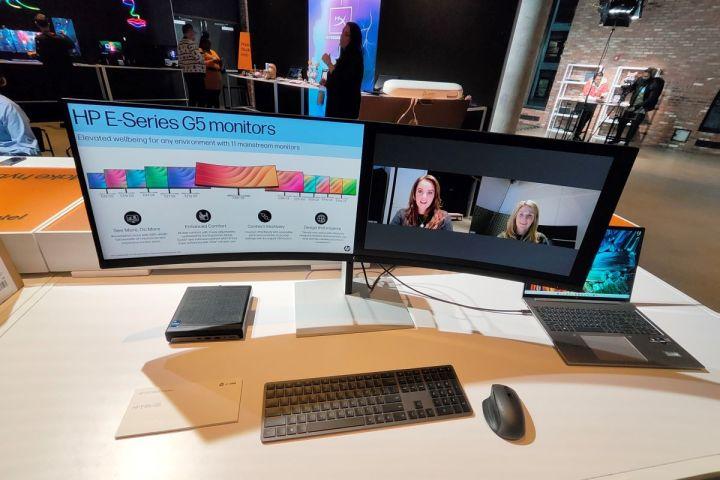 HP has released a new super ultrawide monitor that mimics the look and feel of two displays in a single product.

It’s called the HP E45c G5, and it’s a 45-inch curved monitor that is able to replicate two 24-inch screens with the help of virtual dual-display software. You can operate the two sides of the display simultaneously, for related or separate purposes.

HP noted that similar products of this type might often have a physical divider separating the two screens. However, the E45c G5 includes a split-screen user control within its settings that serves as the on-screen divider between programs.

For example, you can run a Zoom call on one screen and a PowerPoint presentation on the other side independently. You’ll be able to open the PowerPoint in full-screen mode in the 24-inch screen space. The display is also stackable, for scenarios that require even more screen real estate. HP also noted some business use cases for the monitor include finance conditions, coding, and spreadsheets.

The monitor is black in the rear and has a black and silver stand. It is borderless on three sides and has vertical and horizontal viewing angles of 178 degrees. In addition to 100mm by-100mm VESA mounting support, it can tilt and swivel, and its height adjustment goes up and down 150mm.

Some notable display features include AMD FreeSync and the virtual dual display that controls the split-screen functions.

The monitor is a part of HP’s E-Series G5 of displays, which includes 11 different monitors announced at CES 2023.

The E-Series line of monitors will be available in January at a starting price of $219, however, HP has not yet shared specifics on the price of the E45c G5.