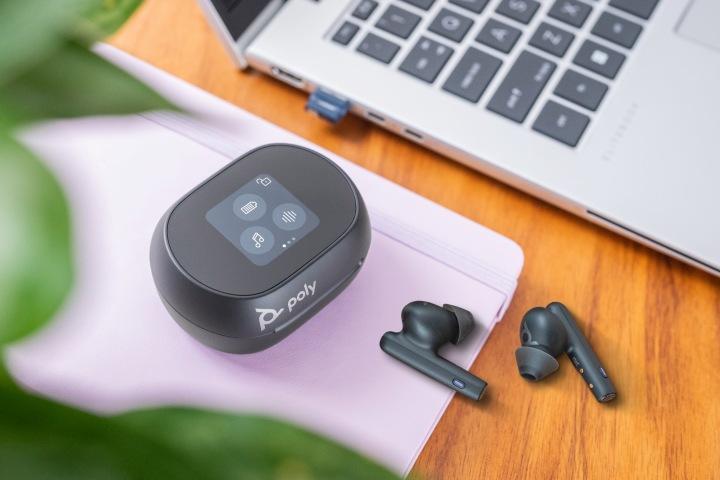 Recently acquired by HP in 2022, Poly has come to CES 2023 with its first wireless earbuds, the Voyager Free 60 and Voyager Free 60+, which go head-to-head with Jabra’s Evolve 2 Buds. Bothnew  products are aimed at folks who want earbuds they can use for work and play, and which feature a dedicated USB Bluetooth adapter that can be used to integrate the earbuds with popular messaging and conferencing apps like Teams or Zoom.

Poly hasn’t provided any pricing or availability for the Voyager Free 60 so far, but we expect these earbuds will be priced competitively to the Evolve 2, which start at $269.

The two versions are very similar — both offer the same stick-style earbuds (in black or white), with active noise cancellation (ANC), transparency mode, wear sensors, wireless charging, and a claimed eight hours of playtime per charge, plus an additional 16 hours in the case. Each earbud has three mics, and Poly says they’re equipped with protection from wind noise. You can use one or both earbuds for music and calling, and the available Poly mobile app lets you configure the amount of sidetone you experiencewhen on calls so you can hear your own voice more clearly. They both support Bluetooth Multipoint for simultaneous connections to two devices, and the included USB adapter (with your choice of USB-A or USB-C) increases wireless range to a huge 98 feet.

However, the Voyager Free 60+ adds several very smart extras to the equation. Its charging case has a built-in OLED touchscreen, much like JBL’s recently announced Tour Pro 2, and you can use it to check battery levels and quickly switch between connected devices. It also comes with an analog-to-USB-C cable that lets you plug the charging case into a seatback headphone jack on an airplane — or any other headphone jack-equipped device — turning the charging case into a wireless transmitter for the earbuds. LG does something similar on its Tone Free T90Q.

You get support for SBC, AAC, and aptX codecs if you use the earbuds without the included USB adapter.  With the adapter, you can also use the newer LC3 codec, but at the moment, it’s only available for enhanced call quality.

Poly says the Voyager Free 60 can be centrally managed from anywhere in the world by an IT team, making them especially attractive to enterprise customers. The only thing that keeps these buds from being a great all-day companion is the lack of any official IP protection from water and dust. So it’s probably not a good idea to take them to the gym or use them for running.