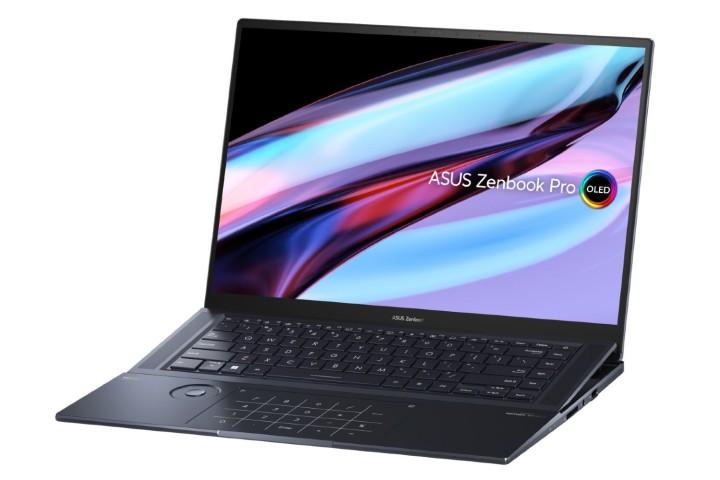 At CES 2023, Asus introduced some impressive updates across its lineup of Zenbook Pro laptops, including its flagship Zenbook Pro 16X, which is starting to look like a serious contender with the 16-inch MacBook Pro. Other updated models include the Zenbook Pro 14 OLED, Zenbook Flip OLED, and Zenbook 14X.

Like the previous Zenbook Pro 16X, the new model (UX7602) still has its interesting fold-up keyboard, which Asus calls AAS Ultra (Active Aerodynamic System Ultra). The extra ventilation pushes more air through the chassis, but now it’s combined with some changes under the hood to improve performance.

Asus says it’s using a custom CPU package, with the memory placed right next to the CPU. The core motherboard area itself has been reduced by 38% as well and is covered by a custom “curved” vapor chamber and liquid metal cooling.

The result is a maximum of 155 watts of power across the GPU and CPU, powered by 13th-gen Intel H-series processors and RTX 40-series graphics.

The overall size of the chassis has been shrunk down to 0.66 inches thick, while still hosting the same versatile port selection, which includes additions like HDMI and an SD card slot, in addition to the usual assortment of USB-A and USB-C. The 1080p webcam is still there, but the audio system has been upgraded from four speakers to six.

Of course, the Zenbook Pro 16X comes with a 16.0-inch OLED screen, as Asus has been continuing to push on many of its laptops. But this time around, the Zenbook Pro 16X gets upgraded to a 3.2K 120Hz refresh rate, up from the standard 60Hz. And just for kicks, it features a per-key “WhiteRGB” backlit keyboard, which Asus says is an industry first.

The Asus Zenbook Pro 14 OLED (UX6404) hasn’t been updated since 2021, but in 2023, it looks like it’s squaring up nicely with Apple’s own 14-inch MacBook Pro. It doesn’t have the same AAS keyboard as the 16-inch model, resorting to a more conventional clamshell design.

It features the next-gen chips from Intel and Nvidia, with a max TDP of 105 watts. It has a 2.8K 120Hz OLED screen, a 1080p webcam, and the same plentiful selection of ports.

The Zenbook 14X OLED and Zenbook 14 Flip OLED don’t have some of those “Pro” features, but still some solid updates this year. The Zenbook 14X OLED used to max out at the MX450, but now you can configure it with an RTX 3050. It also gets 13th-gen H-series Intel chips, updated over the 12th-gen chips featured in last year’s Asus Zenbook 14X Space Edition. The new Sandstone beige color option looks pretty nice too.

The Zenbook Flip OLED can’t be configured with discrete graphics, but now offers 13th-gen P-series Intel options rather than just AMD. You can also configure it up to 1TB of storage for the first time. This model still has a 360-degree hinge, but it now features the new Zenbook branding, including the redesigned logo and lid design.

Asus hasn’t provided pricing or availability information on any of the new Zenbooks yet.