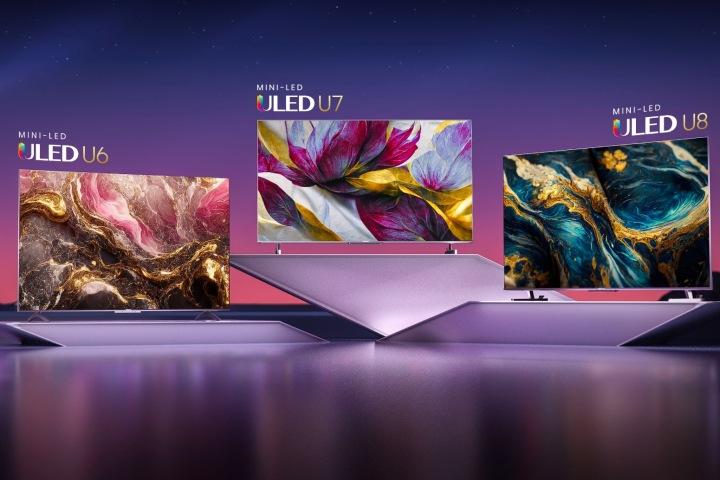 Hisense has revealed its 2023 lineup of TVs at CES 2023, and it’s chock-full of high-brightness mini-LEDs, including a new flagship known as the UX. There are 14 models with mini-LED backlighting, from the high-performance U8K Series to the step-down U7K Series and the affordable U6K Series. With the exception of the U6K, which it says will start at an incredibly affordable sub-$500 price, Hisense hasn’t said how much the new models will cost or when they’ll be available.

Despite the launch of the new UX, featuring Hisense’s ultrabright ULED X technology, the company is still referring to the U8K Series as its flagship. Last year, the U8H was the first Hisense Mini LED, but this year, it’s just one of many such models. For 2023, the U8K more than doubles the U8H’s local dimming zones, while preserving the same claimed 1,500 nits of peak brightness. That should lead to better black levels and less light bleed from the bright areas of the screen into the darker ones.

Hisense hasn’t detailed all of the available screen sizes, but says there will be U8K models ranging from 55 inches to a new 85-inch option. Each size has an antiglare and low-reflection screen to keep ambient light reflections to a minimum.

The U8K is compatible with Imax Enhanced, it has FilmMaker Mode, and it supports both Dolby Vision IQ and HDR10+ HDR formats. For the first time, the U8 Series has a 144Hz native refresh rate for smoother performance, especially when gaming. It keeps features like Game Mode Pro, Auto Low Latency Mode (ALLM), and AMD FreeSync Premium Pro. Hisense says the U8K has “ultra-high-speed HDMI ports” with eARC, but doesn’t say if it supports every HDMI 2.1 feature. New for this year is Wi-Fi 6e for faster, more reliable Wi-Fi connectivity when used with a compatible Wi-Fi router.

There’s a NextGen TV (ATSC 3.0) tuner built-in for up to 4K over-the-air broadcast content, and the TV supports Dolby Atmos. For those who want to set up a completely wire-free home theater sound system, the U8K has WiSA SoundSend support.

Also available in 55-inch to 85-inch screen sizes, the U7 Series now has mini-LED backlighting paired with ULED technology, and quantum dots, and can be calibrated using Calman software. Hisense hasn’t said how bright the U7K gets, but it gets most of the same features as the U8K, like Dolby Vision IQ, HDR10+, HLR, IMAX Enhanced, and FilmMaker Mode.

It also gets 144Hz variable refresh rate (VRR) for smoother gaming, and gamers will likely be thrilled to know that the Gaming Bar, an on-screen status area that used to be exclusive to the U8H, is also on the U7K. Other game-friendly features include ALLM) AMD FreeSync Premium Pro, HDR 10+ Gaming, and Dolby Vision Gaming.

As with the U8K, Dolby Atmos, NextGen TV, eARC, and WiSA SoundSend are all built-in.

Mini-LED lighting has been considered a premium feature of QLED TVs ever since the technology made its debut a few years ago, but now that Hisense is integrating it into its U6 Series — and with prices that it says will start at under $500 — we might need to rethink what we can expect from more affordable TVs.

No word yet on how bright the U6K gets or how many local dimming zones it will have, but Hisense has said these TVs, which will also be available in 50-inch to 85-inch sizes, will have Dolby Vision, HDR 10+, and FilmMaker Mode. There’s a dedicated Game Mode with Dolby Vision and support for VRR at a maximum of 60Hz, with ALLM. We don’t know what kind of speakers are on board, but Dolby Atmos is supported, as is HDMI-eARC.

If $500 is still too rich for your blood, Hisense has yet another level at even more affordable prices. The A65K Series is available in 43-inch to 75-inch screen sizes, and has several handy features like smart home integration and Google TV.