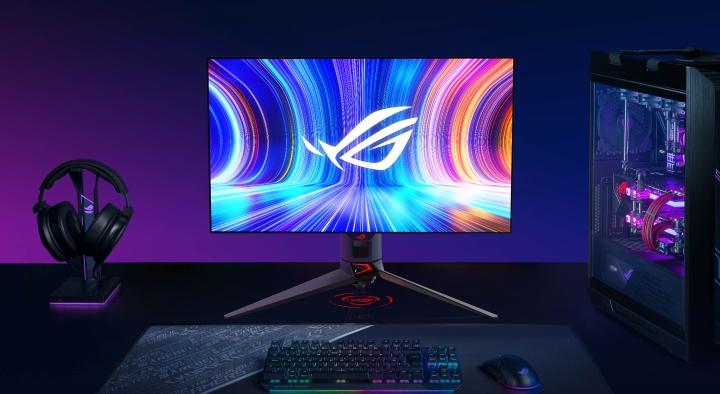 During CES 2023, Asus debuted a brand-new gaming monitor: the ROG Swift OLED PG27AQDM. This display seems to be one of the gems among Asus’ other releases, which include a slew of gaming laptops, monitors, peripherals, and more.

Asus’ new gaming monitor serves up an OLED display in an accessible form. If you’re not a fan of gaming on the enormous OLED monitors that have been available in the past but want high refresh rates and the visuals of OLED, this might be what you’ve been waiting for.

Asus calls this the “endgame monitor,” and it might have a point. The Asus ROG Swift OLED PG27AQDM ticks most of the boxes for gamers, and it avoids some of the downsides usually presented by these screens.

This is a 27-inch monitor with an OLED panel and 1440p resolution. It also serves up really high refresh rates — higher than most of us need, really — maxing out at 240Hz with a response time of 0.03 ms. Seeing as OLEDs can run pretty hot, Asus equipped this one with a custom heatsink which will hopefully do the job.

On the outside, the ROG Swift OLED PG27 is a typical Asus display. It has a bulky stand, next to no bezels, and some fancy RGB action happening in the back of the monitor.

OLED is slowly permeating the gaming world, finding its way into some of the best monitors. However, gamers who choose to go with an OLED panel are often given the TV treatment and are forced to use a massive screen.

For a console gamer, that’s usually not a problem, but those of us who game on a PC simply don’t have the desk real estate to fit a 34-inch (or larger) monitor. Even if you do, it can be uncomfortable to sit so close to a screen that big.

There’s also the matter of refresh rates. We’re slowly bidding farewell to the 60Hz standard, and many gamers now look for monitors that can deliver refresh rates of 144Hz or higher. Some games, especially fast-paced MOBAs and other esports titles, certainly benefit from it. However, many monitor manufacturers aim for one or the other — great visuals with a bright OLED panel or high refresh rates — which forces those users to choose.

Asus’ latest release seems to be hitting the sweet spot and avoiding the aforementioned problems. A refresh rate of 240Hz is more than sufficient, and the 27-inch display size means that you can comfortably fit this on your desk.

It’s also not a curved monitor, which some people still prefer to avoid.

Asus is certainly not alone, though. It’s using an LG panel, and LG has its own version, the 27-inch UltraGear OLED QHD gaming monitor, as does Dough (formerly known as Eve) with its glossy Spectrum OLED.

The ROG Swift OLED PG27AQDM is far from Asus’ only new monitor at CES this year. The company’s second OLED gaming monitor is the ROG Swift OLED PG42UQ, which is a 41.5-inch 4K monitor, which can overclock up to 138Hz and has a “smart KVM” feature that allows for seamless splitting of the screen between two PCs.

Asus also brought “the fastest esports gaming monitor,” the ROG Swift Pro PG248QP, a 24-inch 1080p display with a 540Hz refresh rate (when overclocked). It even comes with an adjustable base to support multiple arrangements and keyboard styles.