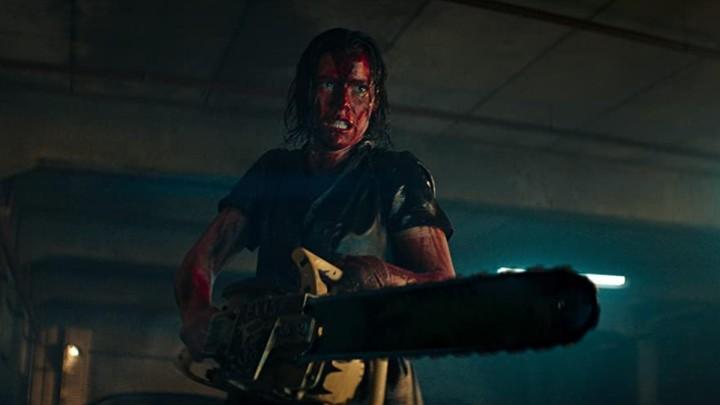 The next chapter in the Evil Dead franchise takes the action from the woods to the city in Evil Dead Rise. The first trailer is bloody, gory, and full of Deadites. In other words, it’s an Evil Dead movie.

Beth (I Met a Girl’s Lily Sullivan) travels to Los Angeles to visit her older sister, Elie (Vikings’s Alyssa Sutherland), and her three children. Elie struggles to raise the children as a single mother in their cramped L.A. apartment, so Beth’s visit is much appreciated. However, the reunion is cut short when they find the Necronomicon, a book from previous Evil Dead films, in Ellie’s building. The evil book unleashes the Deadites, flesh-possessing demons that wreak havoc and bring the horrors of hell to earth. As Elie becomes possessed, Beth becomes a defacto mother as she protects the children while battling the Deadites in all their bloody glory.

Evil Dead Rise is written and directed by Lee Cronin, who is best known for his work on The Hole in the Ground. The cast features Gabrielle Echols, Nell Fisher, Morgan Davies, Tai Wano, Jayden Daniels, Billy Reynolds-McCarthy, and Mia Challis.

One notable name missing from the cast is Bruce Campbell, who starred as Ash Williams in the first three films of the Evil Dead franchise and made a cameo in the fourth. Campbell will serve as an executive producer alongside Sam Raimi (Doctor Strange in the Multiverse of Madness), who wrote and directed the first three Evil Deadfilms. Robert Tapert, the producer on all four Evil Dead films, returns in the same role for the fifth film.