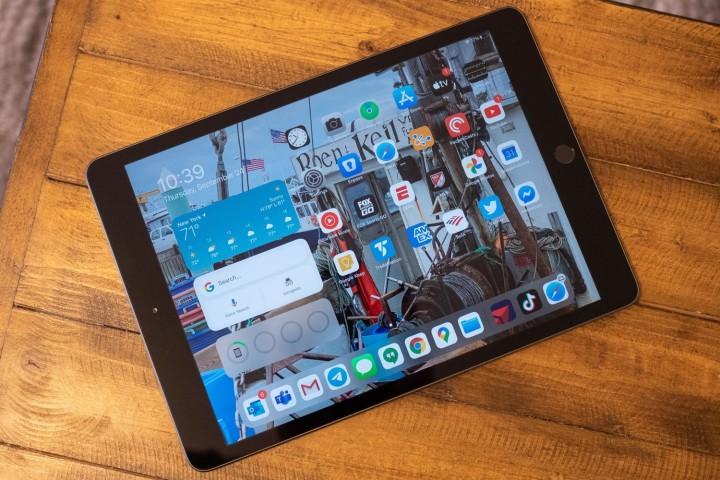 Officially, the biggest deals are behind us, at least until later this year, but even so, it’s still possible to find some great iPad deals. Discounts have appeared on several of the most popular iPads. But rather than recommend you do all the work, we’ve rounded up the best iPad deals you can buy online today, with fantastic discounts on the new 10.2-inch iPad, the latest iPad Air, the travel-friendly iPad Mini, and the top-of-the-line iPad Pro. You can also find deals on new and refurbished earlier iPad models, which can be a wonderful way to save even more. Like most Apple deals, however, the best offers won’t stick around, so act fast.

The latest Apple iPad may offer few discernible upgrades over the previous two generations but that’s because it follows an ‘if it ain’t broke, don’t fix it’ mentality. It offers everything you could need from a simple tablet and a few extras that make it well worth the price. On the surface is its delightful 10.2-inch Retina display with True Tone support. That means that imagery looks great at all times with the iPad being the ideal device for streaming content or browsing the internet in style. Its stereo speakers certainly help ensure that this is a great option if you love to catch up with shows on Netflix while on the move.

Alongside that, the Apple iPad has an A13 Bionic chip with Neural Engine so it’s speedy enough to ensure that you can multitask and work while on the move without missing a beat. The convenience and flexibility of iPadOS certainly help out here, particularly if you already own other Apple-based devices with the ecosystem blending well together. For the traveling worker, a pivotal upgrade to the front or selfie camera helps further still. It has a 12MP Ultra Wide front camera that has Center Stage support. The feature means that the camera effectively follows you around while you’re on a video call, ensuring you’re always the central focus at all times. It’s a great touch that means you always appear professional.

Elsewhere, the iPad’s 8MP wide back camera means you can take a few snaps while on the move. It also works with the Apple Pencil (1st generation) and Smart Keyboard, plus it has up to 10 hours of battery life so it’ll last you all day. Touch ID support means your data and information are secure at all times too, while you get the benefit of being able to log in with your fingerprint.

The Apple iPad Mini is the ideal iPad if you prefer to keep things lightweight without missing out on powerful performance. Well designed in nearly every way, it packs a heck of a lot into a tablet that is also surprisingly slender. While there’s no headphone jack anymore and the screen could be a little brighter, everything else about the iPad Mini exudes class. Starting out, much of that is thanks to its fantastic display. It has an 8.3-inch Liquid Retina display with True Tone and wide color support. Outside of its minor brightness issues, this means that colors almost always pop on screen and look delightfully vibrant and accurate. Far superior to many other tablets when it comes to display quality, the iPad Mini is ideal for working with graphics on the move or when streaming your favorite shows or movies.

That’s further enhanced by the iPad Mini’s use of the A15 Bionic chip with Neural Engine. This makes it impressively speedy in regular use, meaning you can easily multitask while on the move. iPadOS has been increasingly designed with multitasking in mind so it’s a great device for doing exactly that. Touch ID support means all your data is safely stored away, too, so you won’t have to worry about issues there.

For those lighter moments throughout the day, you get Landscape stereo speakers that are impressively loud for the size. The iPad Mini also has a 12MP wide back camera along with a 12MP Ultra Wide front camera. The latter of these has Center Stage support so you’re always the focus on your calls, even when you’re moving around. Up to 10 hours of battery life is possible, while USB-C support means it recharges fast. There’a also the ability to use it with the Apple Pencil (2nd generation) if you feel like getting more hands-on with your work. But iPad Mini deals are rare, so act fast or risk missing out.

The Apple iPad Air is early everything you could want from an iPad. If you don’t want to spend as much as an iPad Pro demands, this is the tablet to suit the majority of your needs. It offers great performance, good cameras for a tablet, along with a gorgeous screen. While some powerhouse users may need the extra might of the iPad Pro, most people will be more than happy with the iPad Air right down to its extensive accessory support.

The first thing you’ll notice about the iPad Air is its 10.9-inch Liquid Retina display. It has True Tone support along with P3 wide color and an antireflective coating that means it works particularly well in bright lighting compared to its competitors. Colors look vibrant while the screen quality ensures that everything looks sharp and delightful at all times. In conjunction with that, the iPad Air also uses Apple’s M1 chip which you’ll see on many of its laptops as well as the iPad Pro meaning you’re guaranteed of fantastically speedy performance. Whether you’re browsing the internet or multitasking for work, the iPad Air keeps up with you at all times, while also serving very well as a mobile gaming device.

Additional features keep on coming. For instance, the iPad Air has a 12MP wide camera along with a 12MP Ultra Wide front camera. The selfie camera also has Center Stage support so it’s capable of following you around on a video call, keeping you the focus at all times. Stereo landscape speakers are powerful and ensure you can always hear what’s going on. All-day battery life also means the iPad Air can keep up with you throughout the day, too. Support for the Magic Keyboard and Apple Pencil gives you maximum flexibility with the iPad Air a dream to use for both productivity tasks and fun.

The Apple iPad Pro 11-inch is a pretty great high-end tablet. It uses Apple’s M1 chip which you will also see in the latest range of MacBooks so you’re guaranteed fantastic performance. Able to outperform all other tablets and smartphones, if speed is everything for you then you absolutely need an iPad Pro. The Apple iPad Pro 11-inch isn’t just about fast performance though. It’s also great in terms of looks. Sleek and lightweight, it uses a stunning 11-inch Liquid Retina display to ensure that whatever you’re looking at looks fantastic. It utilizes ProMotion, True Tone, and P3 wide color so it looks great at all times. ProMotion means that motion blur is a thing of the past while True Tone and P3 wide color mean everything looks great. That’s the case whether you’re thinking of using it for streaming content, sketching designs, or simply browsing the internet.

In addition, the Apple iPad Pro 11-inch also has a stunning camera system. It includes an Ultra Wide front camera that has Center Stage support. The feature means that the iPad effectively follows you around as you take a video call so you’re always the center of attention. The iPad also has a 12MP wide camera along with a 10MP ultra-wide camera. There’s also a lidar scanner for immersive AR purposes so you can get the best out of the latest technology.

Other features include an all-day battery life so you can be productive all day long without needing to find a power source. Also, it has a Thunderbolt port so you can easily connect it to fast external storage, displays, and docks without any bother. The Apple iPad Pro 11-inch also has support for the Apple Pencil (2nd generation) if you want to sketch out designs, as well as the Magic Keyboard, and Smart Keyboard Folio. Face ID keeps everything secure at all times too which is great news when you’re on the move.

The Apple iPad Pro 12.9-inch is the ultimate tablet. In our review, we called it “more than you need” because it is but you’ll love that it offers so much. It uses Apple’s M1 chip to ensure that its performance is unrivaled. It’s incredibly fast to respond and ideal for extensive multitasking. Basically, it’s likely your laptop or desktop is slower than this tablet — that’s how good it is. Whether you’re looking to browse online through multiple tabs or you’re keen to use your tablet as an advanced productivity device, the Apple iPad Pro 12.9-inch has you covered.

When it comes to watching content or sketching out designs, its gorgeous screen is here to help. It has an amazing 12.9-inch Liquid Retina XDR display that truly makes everything pop on screen. With ProMotion support, browsing and scrolling are silky smooth, with the tablet able to cope with the fastest moving of games too. True Tone and P3 wide color mean that colors look phenomenal, too, with the tablet able to cope with all kinds of brightness scenarios.

Elsewhere, it also has a great set of cameras. These include an Ultra Wide camera that has Center Stage support. That means you can use it very well for video calls as it follows you around, ensuring you’re the focus of the call at all times. It’s a great professional touch. In addition, you also get a 12MP wide camera and a Lidar scanner for immersive AR purposes. Other useful features include an all-day battery life plus a Thunderbolt port for hooking up other devices to your tablet. There’s also support for Apple Pencil (2nd generation), Magic Keyboard, and Smart Keyboard Folio, so you can turn the Apple iPad Pro 12.9-inch into a fantastic hybrid laptop with just an accessory or two.