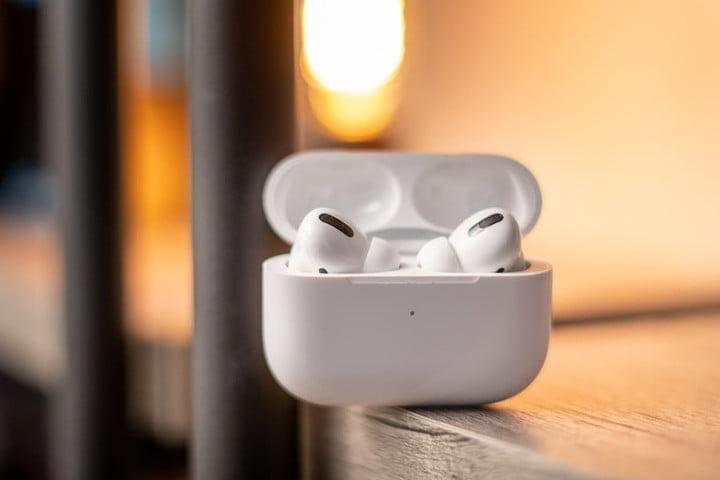 Apple has been a household name synonymous with “quality” since the dawn of PCs. Many of us remember Apple’s vanguard role in the PC revolution of the ’70s and ’80s, and maybe you even used one of those iconic beige Macintosh computers yourself. But in the age of mobile tech, Apple is far more well-known for its handheld devices. The Mac lineup is still loved by many (including us), but whether you’re after a new MacOS laptop or one of the brand’s more portable gadgets, we don’t have to tell you that this stuff ain’t cheap. If you’re an Apple fan, though, you know it’s worth the price — but having an eye for great design doesn’t mean you can’t also love a great deal. To help you find one, we’ve rounded up a hand-picked selection of the best Apple deals available now:

Apple made a lot of waves when the company started removing the 3.5mm wired headphone jack from its devices, but more than made up for it by releasing the AirPods — and kicking off the true wireless earbud revolution in the process. Since then, the AirPods have had a few updates, and the first-gen AirPods Pro are still among the best true wireless earbuds money can buy. They’re one of the company’s most popular products for a reason, and if you’re an Apple fan (meaning you probably use an iPhone and/or an iPad), they’re the earbuds for you, and the first-gen model remains a worthy buy until we see better AirPods deals on the newer 2022 release.

They’ve been out for a couple of years, so deals on these popular earbuds always abound. If you’re on the fence between these and the standard AirPods (which were most recently refreshed with the third-gen AirPods in 2021), our recommendation is to go with the AirPods Pro if they’re within your budget. The sound quality is fantastic, the noise cancellation works well, and they’re comfortable in the ear.

The AirPods Pro also come standard with a MagSafe wireless charging case, which is something we want to see at this price point. But with this hot Apple deal knocking these true wireless earbuds down to less than $200 (which is actually the MSRP for the standard AirPods with wireless charging case), you can get some serious upgrades without paying nearly as much as you normally would.

Smartwatches never became the next smartphones, but the Apple Watch is the one smartwatch that has managed to buck the trend and enjoy widespread popularity — in fact, it’s made Apple one of the largest watchmakers in the world. Apple updated its WatchOS-powered smart wearable last year, releasing the excellent-but-pricey new Apple Watch Series 7. The Apple Watch Series 7 refined everything we loved about previous models, bringing the design to near perfection with great software, a vibrant always-on display, and an excellent set of health- and fitness-tracking features.

The Series 7 sports a larger display than earlier Apple Watch models, but doesn’t sit too large on the wrist as most of that screen increase comes from a sleeker case with slimmed-down bezels. That case is also noticeably more rugged than before. That’s useful since the Apple Watch Series 7 makes for a fantastic fitness tracker that you can take with you on your workouts, outdoor adventures, and virtually anywhere else.

The WatchOS software is intuitive and enjoyable to use, with a helpful notification system that works well when synced with other devices. If you use and iPhone and/or and iPad, the Apple Watch Series 7 is the smartwatch to get (until we see some better deals on the Series 8, at least), and it’s still a fantastic and full-featured wearable even if you don’t own any other Apple products. It’s not cheap, but ongoing Apple deals allow you to score one at a discount.

Apple released a new iPad Mini in 2021, and aside from incremental hardware changes, the updated model isn’t really reinventing the wheel. That’s fine with us given how good these little tablets are and the value they provide, and there’s never really a bad time to score the new 8.3-inch iPad at a discount if you’re looking to get your mitts on this compact powerhouse as iPads go on sale fairly regularly.

When this new iPad Mini 2021 model hit the market last year, our review team raved about its solid hardware performance (it packs the new A15 Bionic chip), great overall design, and solid build quality. It’s display got a slight size upgrade (to 8.3 inches from 7.9 inches on the last-gen model), and the new Mini hits a nice sweet spot between utility and portability. It’s big enough for most tasks you’d do on a tablet minus things like creative work, but it’s small and light enough to carry around all day and forget it’s in your bag.

The 2021 iPad Mini is an even easier sell given how affordable it is relative to other much pricier Apple devices like the iPad Pro line. It’s the one to get if you want something larger than a smartphone but not as large as the standard 10.2-inch iPad (not to mention the plus-sized iPad Pro models), and these Apple deals make now a great time to buy.

Want the over-ear headphone experience with the quality you expect from Apple? It’s right here. The AirPods Max launched in December of 2020 and took the audio world by storm. The headphones are very comfortable, if a bit heavy, with soft mesh on the cups and the overhead strap. They are a marvel to look at. Everything from the sleek metal ear cups to the oversized volume and noise cancellation knob show that Apple knows how to make a beautiful product, and one that arguably even exceeds the brand’s already-high design standards.

But the visuals aren’t all you should care about. The noise cancellation is top notch, and the transparency mode really makes it sound like you’ve taken the headphones off completely. With transparency mode, the headphones let sound in so that you can hear and interact with the world around you (such as when someone is speaking to you, or you want to be aware of your surroundings). This allows you to toggle between total immersion and full situational awareness with the press of a button.

AirPods Max pair perfectly with other Apple devices, such as MacBooks, iPhones, and Apple Watches as well. If you already have a suite of Apple products and earbuds like the AirPods aren’t giving you the immersion you want, then you can’t pass up the AirPods Max. They’re pricey to be sure, but ongoing Apple deals can reduce that sticker shock a bit by giving you a nice discount right now.

With modern laptops getting slimmer and slimmer, the MacBook Air is almost redundant now, but it still does its thing very well. That should come as no shock considering that Apple wrote the book on super-slim laptops with the MacBook Air, and its late 2020 model makes for a fantastic featherweight work machine now that it comes loaded with Apple’s superb M1 CPU.

On the MacBook Air M1, that fantastic processor is paired with 8GB of RAM (perfectly respectable hardware for work, browsing, and streaming) along with a 128GB solid-state drive. The M1 CPU delivers more than snappy performance, though — it’s so thermally efficient that it doesn’t even require any cooling fans. That’s right: The MacBook Air M1 has a completely fanless design. That means it’s whisper-quiet throughout the day while remaining nice and cool.

The M1 chip is also energy-efficient, giving the MacBook Air fantastic all-day battery life. The excellent keyboard and touchpad are comfortable enough for a full day’s work as well. One thing we didn’t like about the Intel Core MacBook Air was its launch price, but the addition of that M1 CPU make it much more attractive and it’s still the cheapest entry point into the MacBook ecosystem — especially with these Apple deals knocking a bit off the usual $1,000 price tag.

The Mac computers weren’t the only devices to get the M1 upgrade: In May of 2021, Apple brought its chipset to the iPad Pro tablets as well. The Pro has always been the most powerful tablet in the iPad lineup (and one you can easily use as a 2-in-1 laptop when paired with a good keyboard case), but the M1 CPU really takes things up a notch. As with the previous fourth-gen model, the fifth-gen iPad Pro comes with one of two display sizes — 11 inches and 12.9-inches — with the 12.9-inch Liquid Retina display boasting mini-LED technology.

Along with the M1 CPU, the 2021 iPad Pro got 5G connectivity, a memory boost (8GB to 16GB from 6GB), and Thunderbolt 3 and USB 4 connectivity. This model comes with 128GB of storage as well. Pair it with a keyboard case, such as Apple’s own Smart Keyboard Folio or Magic Keyboard, and you’ve pretty much got a full-featured 13-inch 2-in-1 laptop for not that much more than what you’d normally pay for a MacBook Air. It’s really Apple’s “do it all” tablet.

The new 12.9-inch model saw a $100 MSRP increase due to the introduction of the M1 CPU and the enhanced Liquid Retina display. As the top tablet in the stable, the fifth-gen iPad Pro is naturally the most expensive, but this is also where you’ll find some of the juiciest Apple deals when they’re available. If you’re after the ultimate iPadOS experience, this is it.

When are the best Apple deals?

Apple keeps retailers on a pretty short leash when it comes to discounts on its products, which is to say that Apple deals are sometimes scarce. That’s a sad fact that Apple fans are already all too aware of. That said, certain items such as AirPods and Apple Watches do go on sale pretty regularly throughout the year. Deals on other devices can be fleeting, however, particularly for pricier Apple products like iPhones and MacBooks.

Apple is also more shy than other brands about participating in big seasonal sales like Prime Day and Black Friday. You generally won’t see big sales happening on the online Apple Store like you do with Best Buy and Amazon or brand outlets like Dell and HP. Nonetheless, these large annual blowouts are still a good time to look for deep discounts, as they do pop up on the most in-demand items. You’ll mostly find them at the bigger online retail outlets (Best Buy, Amazon, Walmart, Target, etc.). Inventory is often limited during these events, though, so you’ll want to be ready and quick on the trigger.

Arguably the absolute best time to look for Apple deals is immediately after the company releases new devices. Apple typically rolls out products in the spring and fall, and these present some fantastic opportunities to find deep discounts on last-gen models. This is especially true of the pricey devices like flagship iPhones, iPads, and MacBooks, which don’t regularly go on sale as often as stuff like AirPods and Apple Watches. Very often, last year’s model will get an immediate $100 price cut across the board when a new one drops. That’s a great way to save a bundle of cash if you’re not fussy about having the latest and greatest gadget (which will likely be succeeded by a new one within a year or two anyway).