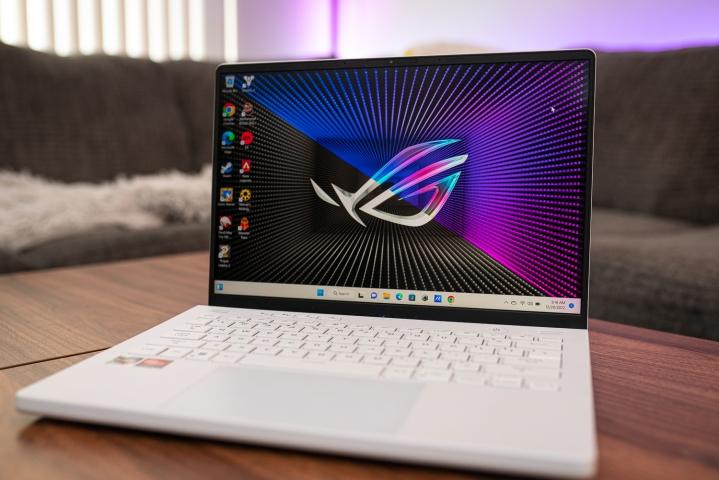 The ROG Zephyrus G14 has been a beloved laptop ever since its launch in 2020. It was the 14-inch gaming laptop to kick off the recent trend in highly compact of gaming machines, followed by options like the Razer Blade 14 and the Acer Predator Triton 300 SE.

But at CES 2023, this gaming laptop just got a whole better.

This wasn’t the year the Zephyrus G14 got a major redesign this year or anything. Not at all. It looks almost indecipherable to previous versions of this laptop, including the compact footprint, the gorgeous white chassis, and the AniMe Matrix lid.

But the big change this year is with its display. The Zephyrus G14 already had a great screen with its 2500 x 1600 resolution and 120Hz refresh rate. For the first time, Asus is bringing an option for a mini-LED panel. It’s a great move because it’s a fantastic way to add more value to this already great laptop without requiring any more heat to this already tiny laptop.

What the 512 local dimming zones bring to the table is a far brighter screen that can really crank up the HDR performance. Now, Asus says this particular panel can max out at 600 nits of brightness, so the HDR might not be as impressive as the 1,100-nit panel on the updated ROG Zephyrus M16. Still, this mini-LED panel should represent significantly better HDR performance over the IPS LED models.

These mini-LED panels are part of Asus’ Nebula HDR program, which is expanding to support far more gaming laptops in 2023. As we have been talking about for years, proper HDR panels are a great next step for PC gaming, which has delayed the development of the setting in more games. But for the games that support it, HDR can really elevate the visual fidelity of game environments without further taxing your GPUs.

Of course, only the more expensive configurations will offer the mini-LED panel, whereas the cheaper models will use conventional backlighting.

The display isn’t the only upgrade this year. The Zephyrus G14 gets bumped to the latest Ryzen processors, and this year, it’s switching to Nvidia’s RTX 40-series GPUs. Asus didn’t specify which chips exactly, but you should expect it to range at least up to the RTX 4060.

Like many of the updated gaming laptops this year, the Zephyrus G14 this year also gets Nvidia Advanced Optimus and G-Sync.

Asus has not announced pricing for the Zephyrus G14 just yet but says the laptop will be available sometime in the second quarter of 2023.