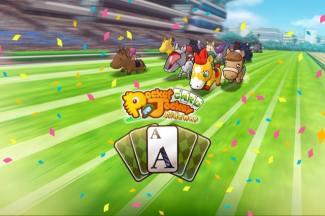 Apple Arcade is kicking off 2023 by adding three new titles in January. Most notable among them is Pocket Card Jockey: Ride On!, a mobile port of one of the Nintendo 3DS cult hits set to launch on January 20.

The original Pocket Card Jockey, released in 2013 in Japan and 2016 in North America, is one of the 3DS’ oddest titles. Developed by Pokémon studio Game Freak, it’s a horse-racing RPG that revolves around solitaire. Players raise and breed horses and then race them by playing fast-paced rounds of solitaire. It’s an extremely bizarre concept, but an incredibly fun one that made it one of the handheld’s most charming hidden gems.

The Apple Arcade edition will stay true to the original, though it’ll make one change: horse races have been recreated in 3D. In the original game, they’d appear in 2D on the 3DS’ top screen while players used the bottom to play solitaire. Judging by screenshots, it would appear that races now unfold behind the solitaire action.

The addition is particularly notable because the original Pocket Card Jockey will be impossible to buy come March. The Nintendo 3DS eShop is set to shut down on March 27 this year. Since Pocket Card Jockey is a digital-only release, it will no longer be purchasable after that date. The Apple Arcade release will save it from disappearing.

Apple Arcade is getting a few more games this month as well. Squiggle Drop is a physics puzzle game where players drop shapes, while Illustrated fuses both word and jigsaw puzzles. The new releases will kick off this week with the next installment of the Episode series, Episode XOXO.