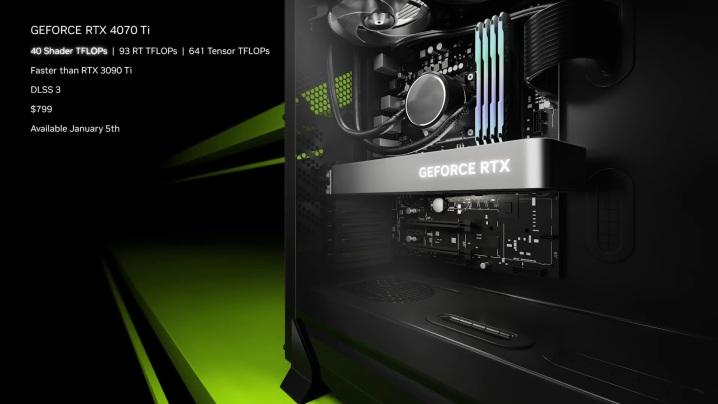 Nvidia’s controversial RTX 4070 Ti is real, and the company announced the card would arrive on January 5 in its CES 2023 keynote — just a couple of days after the announcement. Why the accelerated timeline? There’s a good chance Nvidia has had the RTX 4070 Ti in the incubator for a while.

For starters, the RTX 4070 Ti doesn’t require the infamous 12-pin power connector that was melting on some RTX 4090 GPUs. Instead, some models will accept dual 8-pin power. Nvidia isn’t making a Founder’s Edition model for the RTX 4070 Ti, so it appears the power connectors are up to the board partners design.

Don’t get too hung up on those numbers, though. The RTX 4070 Ti supports DLSS Frame Generation, which generates new frames to boost your performance by close to double. Nvidia’s benchmarks include games like Warhammer 40,000: Darktide, Cyberpunk 2077, and Spider-Man Miles Morales — all games that support DLSS 3. In non-DLSS games like Forza Horizon 5 and Call of Duty Modern Warfare 2, performance is only slightly above the RTX 3090 Ti.

Although the RTX 4070 Ti includes a new name, and an update price. The list price is $800, but without a Founder’s Edition design, the final price of the card is largely up to board partners like Asus, PNY, and MSI.