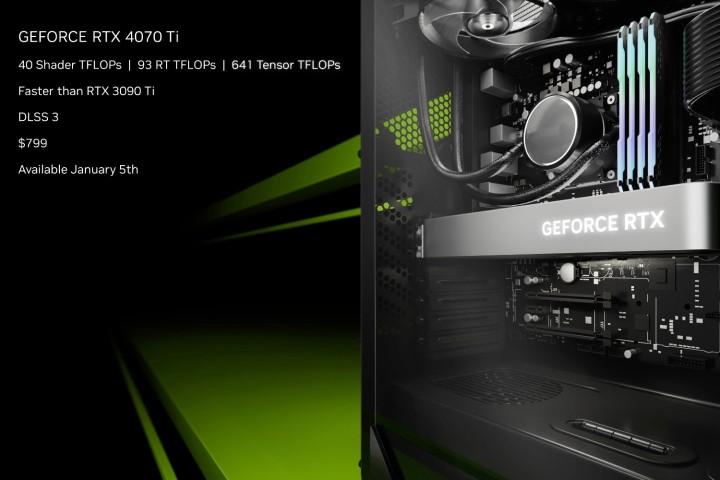 Nvidia announced a “new” GPU dubbed the RTX 4070 Ti via its broadcast ahead of CES 2023. Why the quotations around “new,” you ask?

Well, it’s not a new GPU at all actually, but you’d never know it by the way Nvidia GeForce head Jeff Fisher just talked about it. If you weren’t paying close attention to tech media news for the past few months, you’d think this was Nvidia’s fourth GPU in the new RTX 40-series — but no. It’s just a new name for a product that was announced last year, and then quickly retracted.

In October of last year, Nvidia did something unheard of in the tech industry. It “unlaunched” a recently announced product, the RTX 4080 12GB. And that was Nvidia’s own language, not mine, mentioned in a quiet blog post with a total of five sentences, most of which was spent on talking up the hype around the RTX 4090.

And then the rumors starting building that the GPU would get rebranded as the “RTX 4070 Ti,” which Nvidia seems to think would fix all the problems with this overpriced graphics card.

Not only does it not magically make this thing a good value, but Nvidia just completely skipped over the fact that the RTX 4070 Ti is really just a rebrand. Again, if you were watching this broadcast and perhaps missed the news about the “unlaunch,” you’d have no idea that this wasn’t a brand new graphics card.

It’s like Nvidia wants us to just forget that all that “unlaunching” business ever happened, or that it announced a GPU called the RTX 4080 12GB that just now materialized with a new name.

Rather than come clean about what this “new” GPU really is, Nvidia is trying to do mind wipe. It would have been great chance to poke fun at itself or just be honest about what exactly happened. Why not admit that the change was in response to feedback? Tech enthusiasts and PC gamers love to hear that their opinions are heard.

But no. Nvidia wants to play it cool and pretend like it didn’t totally flub this product launch. At a time when its RTX 40-series GPUs already have a pretty bad reputation, gaslighting us wasn’t the wisest choice here.