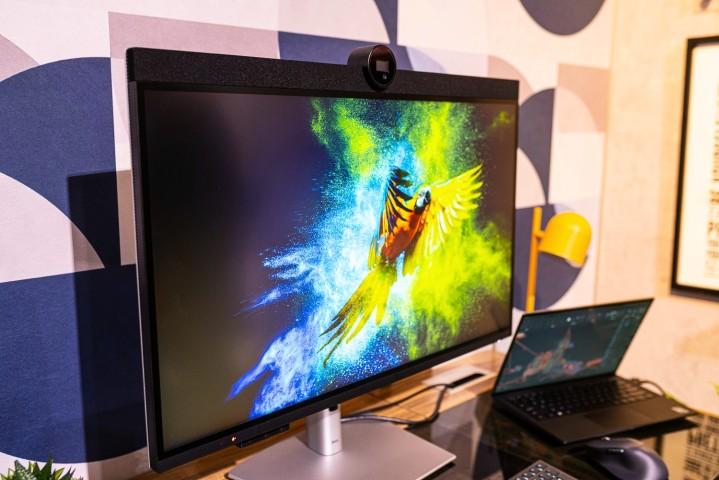 As the name implies, the Dell UltraSharp 32 6K Monitor (U3224KB) has a resolution of 6144 x 3456 and a 31.5-inch screen size — and those aren’t just random numbers. That matches the pixel density of sharper, smaller screens, like the one you’ll find on a high-end laptop.

The larger your screen, the more those individual pixels are stretched out, which reduces the visible sharpness of a screen. A traditional 32-inch 4K monitor has a pixel density of just 129 ppi (pixels per inch), which is less pixel-dense than a 13.3-inch laptop screen with a 1080p resolution.

In comparison, the UltraSharp 6K hits 223 ppi, which is among the sharpest screens you can get at this screen size. It also matches the resolution of the 6K Pro Display XDR from Apple, which I’m sure is no coincidence. That also means it’s sharper than 5K displays like Apple’s Studio Display and Samsung’s recently announced Viewfinity 5K display.

Rather than opt for more advanced panel technology like OLED or mini-LED, the UltraSharp 32 6K uses an improved version of IPS known as IPS Black. Dell claims this monitor 1.4x better contrast, 41% deeper blacks, and 1.2x more accurate colors. The technology is a collaboration between Dell and LG (the manufacturer of the panel itself) — and so far, we’ve only tested it on one other unit, the UltraSharp 32 4K USB-C Hub Monitor U3223QE.

The UltraSharp 32 6K Monitor is more than just a sharp screen though. It also has a built-in 4K webcam, which also features a larger second-generation Sony Starvis CMOS (complementary metal oxide semiconductor) sensor. The extra large housing is located above the display alongside the speaker grille, where the two 12-watt speakers are located. Admittedly, it remains a bit of an odd look. Dell featured this design in its UltraSharp U3223QZ from last year, but this time the webcam and top bezel are even larger.

The webcam is branded as being “intelligent,” meaning it comes with features like auto framing, light adjustments, enhanced clarity, an automatic shutter, and an echo-canceling mic. It also both records and plays back video at 4K at 30 frames per second (fps), or 1080p at either 30 fps or 60 fps. The housing can tilt the camera by up to 20 degrees and the field of view can be set to 65 degrees, 78 degrees, or 90 degrees.

Possibly my favorite addition to the monitor is the flip-down forward-facing USB ports along the left bottom of the frame. They’re super convenient when you need them, and totally disappear when you don’t. That’s one feature I wish more monitors would adopt.

Dell has also announced two larger monitors, the UltraSharp 34 Curved USB-C Hub Monitor (U3423WE) and UltraSharp 43 4K USB-C Hub Monitor (U4323QE). The U3423WE brings the same IPS Black technology to the ultrawide aspect ratio, while the U4323QE’s unique feature is its ability to connect up to four different PCs and view all four inputs simultaneously or switch between them with a KVM.