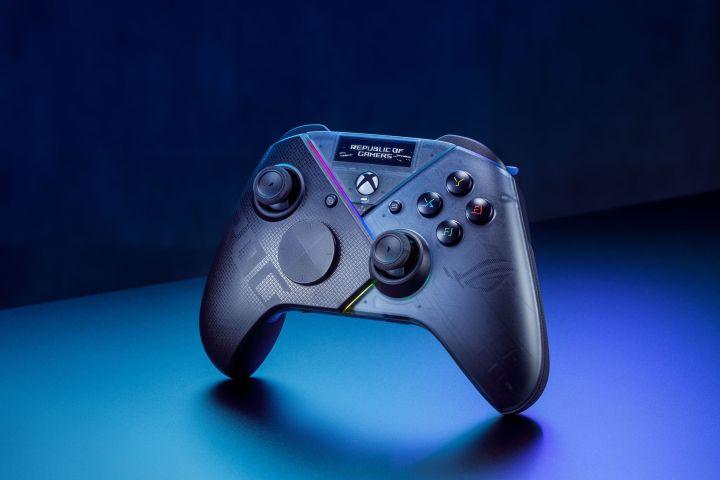 ROG is no stranger to creating gamepads, though the company generally specializes in ones built for mobile devices. The Raikiri Pro is a high-end PC controller, officially licensed by Xbox, that offers a lot of promise on paper.

On its surface, it’s a relatively standard Xbox controller with colored ABXY buttons, two sticks, and a standard X home button. Its biggest layout difference comes in the form of its circular D-pad, but it otherwise looks like a standard gamepad at a glance, albeit one with a unique aesthetic design complimented by some ROG logos on the front.

There’s a lot more to the Raikiri Pro than meets the eye, though. For one, it has a small, built-in OLED screen above the Xbox button which can display anything from custom images to battery or microphone status. Two small buttons on the top of the controller allow players to easily switch profiles at any time. It’s a unique feature that looks like a throwback to the Dreamcast controller’s built-in screen.

The back of the controller is where it gets more into “pro territory” as it features four programmable rear buttons and trigger locks. The back button commands can be customized via ROG’s Armoury Crate software, which can also be used to set vibration levels, joystick dead zone, and more.

The Raikiri Pro features “tri-mode” connectivity, allowing it to connect via Bluetooth, 2.4 GHz RF, or USB C. On the audio front, it features built-in ESS DAC. All of that should make for a feature-rich third-party controller built with PC and Xbox in mind.

At the moment, ROG has yet to reveal a price or firm release date for the Raikiri Pro. It’s set to launch sometime in 2023’s second quarter.