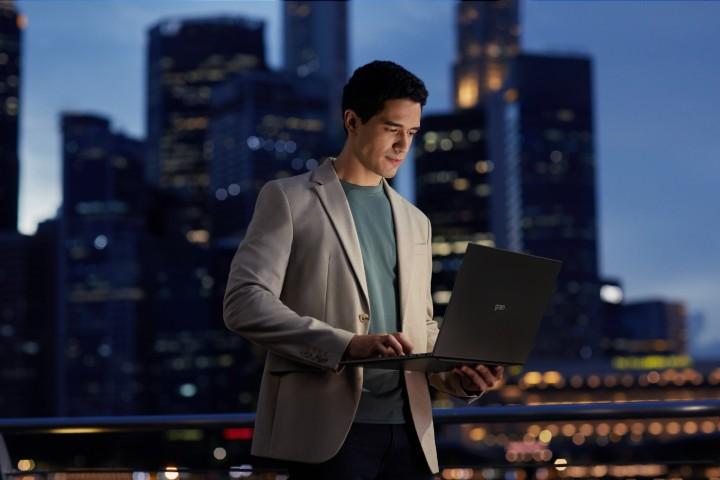 Despite those dimensions, the laptop still sports a 15.6-inch Full HD 16:9 OLED display with anti-glare and low-reflection coating. The 60Hz OLED panel is a nice addition, though the 16:9 aspect ratio is a head-scratcher as most modern laptops have moved to 16:10 (as have most of LG’s other laptops this year).

Under the hood, the LG Gram Ultraslim is armed with Intel 13th-gen Raptor Lake P-Series processors.

The LG Gram Style is next. It comes in 14- and 16-inch versions, and their focus is on elegant aesthetics. They feature glass designs with color options that shift dynamically with ambient lighting. Hidden haptic touchpads feature LED backlighting that illuminates with the user’s touch.

The standard LG Gram lineup has also been updated to Intel 13th-gen P-series processors. The 16- and 17-inch models offer Nvidia RTX 3050 discrete GPUs for additional creative performance. The heaviest LG Gram will come in at 3.2 pounds while the lightest will weigh just 2.2 pounds, and the two largest models will feature variable refresh rate (VRR) technology from 31Hz to 144Hz and Dolby Atmos.

All of the announced laptops will be configurable from 8GB to 32GB of RAM and up to 1B Gen 4 PCIe SSDs. A full complement of ports will be available depending on the model, including USB-C with Thunderbolt 4, HDMI, and microSD card readers. All webcams will run at 1080p resolution, providing upgraded videoconferencing performance.

Finally, the +view Portable Monitor has been updated to feature dual USB-C ports. This will allow connecting to two devices at once and providing two-way power delivery to the display.

Availability for all these devices will begin in February, 2023, and pricing has yet to be announced.