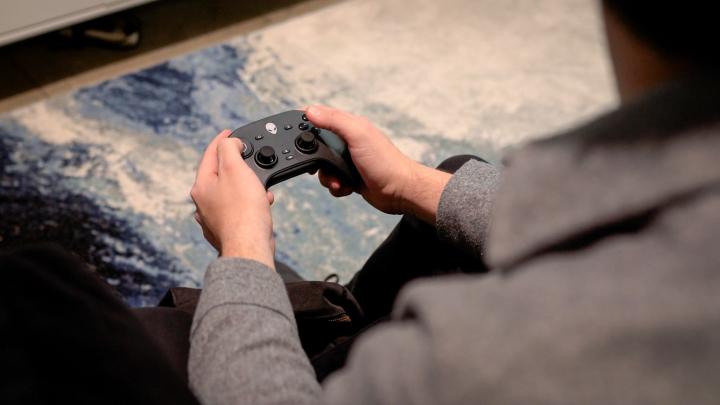 Dell is expanding its Concept Nyx efforts with a vital piece of kit: an Alienware-branded controller. A controller isn’t something I’d normally write about; they’re a dime a dozen. But this concept has some unique ideas, even if it still needs some work before it’s ready for prime time.

First, let’s discuss Concept Nyx. Alienware debuted this idea at last year’s CES, and it’s expanding on the idea this year. Nyx is a whole-house server, and the idea is that you can carry your gameplay to any screen you have. Move from the desktop onto the couch and pick up immediately — and I do mean immediately — where you left off. If someone else is playing a game or using the server for anything else, you can even split the screen and enjoy Cyberpunk 2077 while someone else is ranking up in Overwatch 2 or chatting on a video call.

Adding a controller to this setup is more significant than it might seem at first. Dell designed this gamepad specifically with Concept Nyx in mind. At first glance, it’s derivative of PlayStation 5 and Xbox Series X controllers. You get the general shape of an Xbox controller, but Dell positioned the thumb sticks at the bottom, like on Sony’s DualSense.

On top, the most significant change is the D-pad, which isn’t a D-pad at all. It’s a circular touchpad that Dell calls the Omnipad, and it’s not dissimilar from the touchpads you find on Valve’s Steam Controller (thoughit’s  a whole lot smaller). This dial allows you to use an on-screen overlay to access a variety of commands that are customized to the game you’re playing.

You can load up the dial with eight (or more) abilities in Guild Wars 2 and simply swipe in the direction to execute them. If that’s not enough, use one of the two back paddles as a Shift key to bring up a rotary menu of your items, allowing you access to dozens of inputs that normally wouldn’t be possible on a controller.

That’s not even the most futuristic tech in the controller either. A fingerprint sensor is built into the Alienware logo. Imagine if signing onto Steam from your couch was as simple signing into an app on your phone. This is just a concept, but it’s a damn compelling one if you’ve ever struggled through PC gaming in the living room.

There’s also a microphone allowing for voice commands — “Alexa, load Destiny 2” — and Wi-Fi built in, allowing you to simply point at the screen you want to play on and connect with the press of a trigger.

My personal favorite feature has to be the dual scroll wheels positioned on the bottom edge of the controller. You can use them to adjust your volume with a handy LED readout at the bottom of the gamepad, but also adjust the resistance of the sticks and triggers on the fly. Dell is even including the idea of Adaptive Triggers from Sony’s DualSense, and in a way that you can adjust right on the controller.

This is just a concept right now, though, and Dell needs to go through a lot of iterations before this controller is ready. For starters, it’s definitely a B-movie gamepad experience. It’s not the perfectly refined feel of an Xbox or PlayStation controller that effortlessly fits in your hand. It feels more like a controller from SteelSeries or Razer or PowerA — just a little off. That’s mainly because the controller is flat on top, rather than having the smooth curves on Microsoft and Sony designs.

The Omnipad needs a lot of work, too. It’s stationary, so you don’t get the eight directions of input that you find on the Steam Deck’s touchpads. The haptics included in some of the controller models helps, but there isn’t any way to physically press like you could on an eight-way D-pad. That’s a killer for platformers and the frequent double presses you need in fighting games.

Dell’s demo didn’t fully work when I saw the controller, and instead relied on a short video to show the overlays and software. That’s a critical aspect of this controller that would need to work, and I imagine the design team has a long way to go on that front.

This is a concept not dissimilar from Dell’s oddly prophetic Concept UFO we saw a few years back. That means we might not ever see the Concept Nyx controller on the market, and if we do, it won’t be for several years. That would be a shame, though.

The design clearly needs some work, but it also holds some promising features that could make the future of couch PC gaming much more practical — with or without Concept Nyx at the helm.