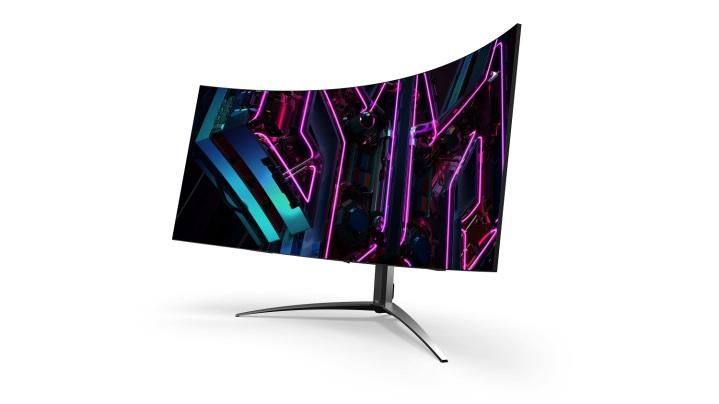 Acer is debuting a new 45-inch OLED monitor at CES 2023. The Predator X45 is an ultrawide gaming monitor that leverages an OLED panel, and Acer says its capable of insane brightness and contrast that could go up against the best gaming monitors.

For specs, the Predator X45 uses a 45-inch, 21:9 panel. It fits in the same class as a monitor like the Alienware 34 QD-OLED that’s wider than a traditional 16:9 display. It also comes with an aggressive 800R curve, which is very similar to the LG UltraGear 45-inch OLED we saw last December.

It comes with a 3440 x 1440 resolution, which is just below 4K. The standout here is Acer’s image quality claims. The OLED panel is capable of producing 1,000 nits of peak brightness and 98.5% coverage of the DCI-P3 professional color space, according to Acer. Although Acer hasn’t announced any HDR certification yet, OLED usually provides the best HDR monitor experience you can get.

Although much different in size, the Predator X27U and Predator X45 both support a 240Hz refresh rate and a response time of 0.01 milliseconds according to Acer. They also both support AMD FreeSync Premium to prevent screen tearing and a KVM switch so you can swap your keyboard and mouse between multiple inputs.

For ports, Acer says the Predator X45 comes with a DisplayPort 1.4 connection and two HDMI 2.0 ports. Although HDMI 2.1 is the running standard, HDMI 2.0 can still supply enough bandwidth for the refresh rate and resolution of both displays.

We’ll likely see several similar monitors at CES this year. Dough (formerly known as Eve) announced its 27-inch OLED in December, and LG has 27-inch and 45-inch OLED monitors that are coming soon, as well.