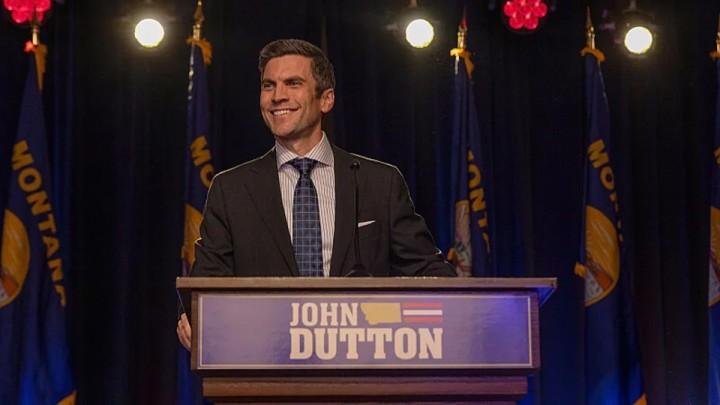 Now that Yellowstone has wrapped up the first half of its fifth season, fans will have plenty of time to contemplate all the implications of this mid-season finale.

Yellowstone‘s latest episode, “A Knife and No Coin,” is the mid-season finale of the hit series and featured members of the Dutton family entering into open war with one another, leaving us wondering if Jamie could actually remove his father from office.

Jamie moves against his father

The main plot development of this episode is Jamie’s decision to move forward with an attempt to remove his father from the governor’s office. When John and Beth discover what Jamie’s done, Beth accurately describes it as a declaration of war.

The move leads to a violent confrontation between Beth and Jamie in which each of them threatens the other. Beth threatens to reveal that Jamie killed Garrett if he moves forward with the impeachment, and Jamie then threatens to reveal how many bodies John has disposed over his years as head of the family. Jamie then adds that he knows that John is running Yellowstone into the ground, and he plans to do what it takes to save the ranch.

Back at Yellowstone, the protected wolves living on the ranch are killed, and it seems like John may have known that was going to happen. What seems clearer, though, is that Jamie and Beth are planning not just for a legal war, but for doing whatever it might take to get the other out of the way.

Late in the episode, we see Jamie and Sarah canoodling as Jamie asks her whether she knows anyone who might be able to take Beth out in a more permanent fashion. Jamie knows that Beth is going to make a similar run at him, and he wants to be prepared. Sarah says that she does, and even agrees to meet with some potential hitmen on his behalf.

The episode doesn’t end on that fairly climactic note, though. Instead, we get a final scene between Kayce and Monica in which she pitches him on the idea of moving to the east camp while they look after the ranch for the Duttons. She suggests it might be the best way for them to get everything that they’ve always wanted. It’s a fine scene, but a bit of a comedown from all the potential bloodshed that the rest of the episode suggests could be in the offing.

The opening flashback hints at what’s to come

In an opening flashback, we see the way that Rip became a part of the Dutton clan, which plays a thematic importance to how the rest of the episode plays out. Jamie may be at war with the rest of his family, but once you’re a Dutton, you’re in for life. Jamie and his father may ultimately find their way back toward one another. After all, even as he plans the death of one of his siblings, he’s still part of the family.

This cliffhanger won’t resolve soon. Season 5 of Yellowstone will resume episodes some time this summer.