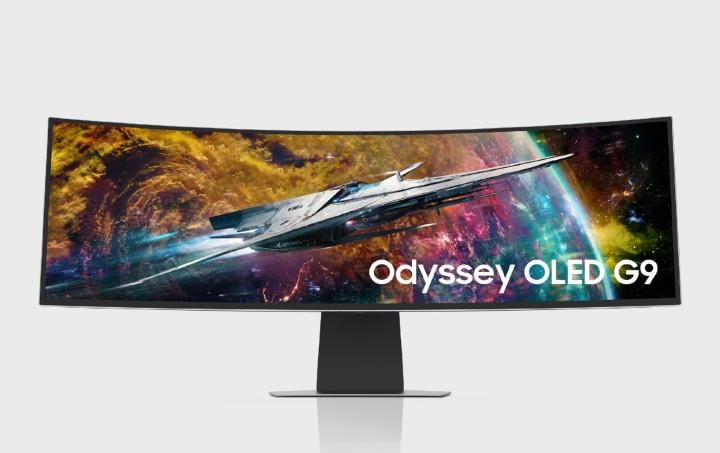 Samsung is convinced you need a bigger gaming monitor — or at least, that’s what its CES 2023 lineup suggests. The company introduced four new monitors to its Odyssey gaming line, ranging from a 34-inch ultrawide monitor up to its 8K 57-inch monster.

It’s an interesting move considering CES is also bringing the first 27-inch OLED monitors from LG that have been the talk of tech for the past couple of months. But for now, Samsung has just two Odyssey OLED monitors it’s introducing: a 34-inch model and a 49-inch model.

Unlike the surge of new 27-inch OLED gaming monitors, Samsung’s first OLED monitors use its own QD-OLED panels, first introduced in the Alienware 34 QD-OLED, which launched last year. QD-OLED is Samsung’s long-awaited answer to LG OLED, and so far, it’s proven to be a serious contender.

The Samsung Odyssey G95SC 49 is the most interesting of all these new monitors. It takes the form factor of the Odyssey Neo G9 and throws an OLED panel into the mix. That means it’s a 32:9 super-ultrawide monitor with an 1800R curve that essentially stacks two 1440p monitors side-by-side (what Samsung calls “dual QHD”), for a total resolution of 5120 x 1440. It comes with the same 240Hz refresh rate as the Odyssey Neo G9 as well.

The Odyssey OLED 34 is a little tamer — a 21:9 ultrawide monitor with a 175Hz refresh rate. According to Samsung, both monitors come with a 0.1ms response time and HDR True Black 400. All this matches what we saw on the Alienware 34 QD-OLED, which is no surprise. Samsung didn’t mention if this is an official DisplayHDR certification or not, though. The company skirted that certification process with last year’s Odyssey Neo G8.

Beyond just a new panel, these new OLED monitors feature a refreshed design too. The stand is wider, and the base shouldn’t take up quite as much space as with the G8. The branding on the rear is a bit less bombastic too. The simpler design looks much cleaner, as does the circular RGB ring at its center.

Although Samsung has a new monitor in the 49-inch 32:9 category, the Odyssey Neo G9 isn’t going anywhere. This monitor was teased by AMD last November as one of the first 8K monitors on the market, and it’s even crazier than what our first look suggested.

Obviously, the 8K resolution is the stand-out feature, enabled by the DisplayPort 2.1, which doubles data transfer speeds to allow for the bandwidth to do 8K. Whether or not your PC can handle that many pixels is another question, though, especially since only AMD’s latest GPUs support the feature.

The Odyssey Neo G9 is a 57-inch 32:9 monitor with a 1000R curve that puts two 4K displays side by side, for a total resolution of 7680 x 2160. Even with the boosted resolution, Samsung is maintaining a super-high 240Hz refresh rate and 1ms response time. It’s not OLED, but the updated new Odyssey Neo G9 does use mini-LED backlighting, which Samsung says gives it a contrast ratio of 1,000,000:1.

Wide aspect ratios are the staple of Samsung’s new Odyssey lineup, short of the Odyssey Neo G7. The 2023 model uses a traditional 16:9 aspect ratio, but it’s 43 inches big. Samsung seems to be targeting this more as a TV, as it includes a 2.2-channel speaker system and Samsung’s smart TV operating system.

The Odyssey Neo G9 is certified by VESA for Display HDR 1000, and Samsung says delivers “superior imaging in any game environment, from shadows to bright scenes.”

Both the Odyssey Neo G9 and Odyssey OLED G9 include adaptive sync and AMD FreeSync Premium. They both also comes with Samsung Smart Hub and Game Hub. That gives you direct access to streaming video apps like Prime Video, Netflix, and YouTube without even connecting to a PC. Similarly, Game Hub let’s you stream games from Xbox and Nvidia GeForce Now.

Both monitors also include USB-C charging up to 65 watts.