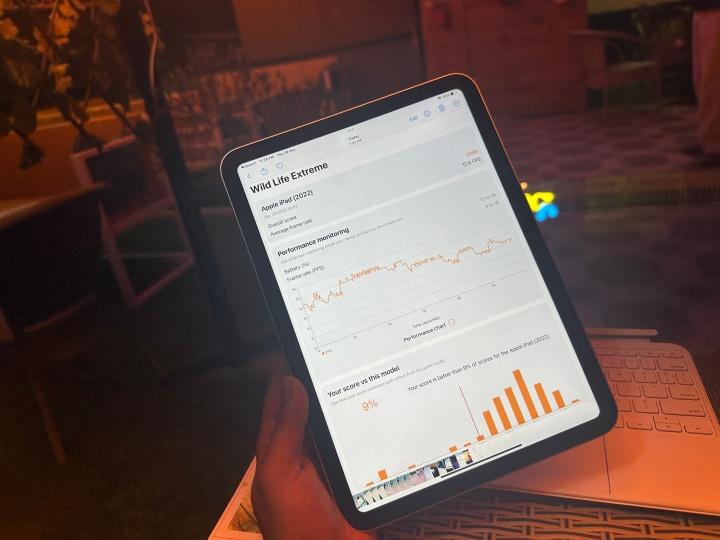 I love using the iPad as my primary computer. No self-respecting digital nomad should be allowed to say those words. At least not in 2022, when iPadOS is still miles behind macOS, primarily because of Apple’s walled-garden approach to the iPad app ecosystem.

But after spending well over $800 on the whole kit with the new Magic Keyboard Folio and Apple Pencil, maybe I’ve downed the bitter potion of its cons and learned to love it. Or, to put it more accurately, be at peace with its limitations. Whatever way you put it, this sleek tablet is impressive, and infuriating, to the same measure.

I’ll start with the performance aspect, which has pushed the 10th Gen iPad towards a maddeningly weird bottleneck from various directions. On the Geekbench 5 benchmark test, it actually finished the test before the Samsung Galaxy S22 Ultra with the Snapdragon 8 Gen 1 and scored far higher.

The performance gulf is also visible on the graphics processing side of things. On the 3D Mark Wild Life Extreme test, the iPad again edged past the Snapdragon 8 Gen 1-powered Galaxy Tab S8, at both the overall graphics score and frame rate. metrics.

More importantly, it proved to be significantly better at retaining high frame rates under stress with a less drastic dip in performance. In simple words, you will come across fewer stutters and frame drops while gaming on the iPad compared to an Android tablet.

The iPad (2022) has all the firepower in the world to crush every single game and even handle video editing apps like DaVinci resolve. I had my video editor friend try some quick vertical video edits on the iPad, and he remarked that this $450 tablet has no right to be able to do that.

That makes me wonder — why is Apple serving a watered-down version of iPadOS 16 on the 10th Gen iPad, compared to the Air and Pro models? For example, you don’t get Stage Manager on the iPad, because it’s exclusive to the M1 and M2-powered tablets. It’s another day’s debate that even on those iPads, it’s not a very rewarding experience.

I am not sure what exactly the compute and graphics requirements are for Stage Manager, and for the ability to use it by connecting to an external display, but it seems strange to me that the A14 Bionic isn’t powerful enough to handle it. I clearly remember WWDC 2020 when Apple proudly showcased a Mac based on the A12Z Bionic processor, powering its shift away from Intel to its M-series silicon.

This company pulled off a monumental computing ecosystem transition and used the 2020 iPad Pro’s A12Z chip to show off its silicon chops, but claims that the A14 Bionic can’t run a certain feature called Stage Manager. Alright, maybe external display support is asking too much for a $450 tablet.

But at least Apple should’ve offered a diluted version of Stage Manager by limiting the number of apps you can run in the background, cutting down on the animation work, and a few other tweaks. Apple already plays this game with the camera capabilities on its Pro and non-Pro iPhones.

Implementing something similar on the software side for the iPad doesn’t sound implausible. I’d much rather have the user decide whether an experience is good or bad enough for them, instead of never experiencing it in the first place.

Stage Manager, however, isn’t the only forbidden fruit for the 10th-gen iPad. With Stage Manager out of its reach, one of the most troubling iPadOS 16 limitations also comes to the forefront — poor window management. There’s no free-form window resizing ability or overlapping windows.

There’s no concept of a focus app or quick access to those running in the background. The iPad so happily trounces the Samsung Galaxy Tab S8 at raw performance, and yet, the Samsung tablet handles window management and split-screen multitasking astronomically better than its Apple rival.

Why build a whole ecosystem of computing products, such as a far better keyboard folio with a godsend function key row, when the software itself struggles to keep up? Plus, that hardware doesn’t come cheap, in typical Apple fashion. Apple wants you to pay $249 for its Magic Keyboard Folio case, while the excellent Logitech Combo Touch costs just $160.

Despite being cheaper by a healthy $90, the Logitech keyboard races ahead in a few meaningful ways. First, this keyboard is backlit. Second, the kickstand offers more degree of angle adjustment. Third, it has a rubber grip around the tablet part, offering much better protection.

Plus, there’s a neat loop at the top to hold the stylus. By the way, if you also buy Logitech’s cheaper (by $30) Crayon stylus, you will be saved from Apple Pencil’s $9 dongle hell, too. Actually, let’s forget the computing sins of the iPad, and focus on the more tangible side of things.

This is still the good ol’ iPad; a reliable video-watching machine. Unfortunately, I don’t know a lot of people that watch a movie on an iPad with its speakers blasting at full volume, not at home with people around, and certainly not in public places.

A 3.5mm headphone jack seems fundamentally crucial to the “perfect multimedia machine” image of the iPad, and yet, it’s missing. I know we live in the era of Bluetooth earbuds, but only the expensive ones can last you about four, or more, hours on a single charge.

But even these pricey earbuds have a very real battery degradation problem. My two-year-old AirPods can barely last two hours on a single charge, which is not enough to watch a James Cameron movie, and definitely not worthy of a Netflix binge-watching session.

Should you then spend $179 to get new, longer-lasting AirPods 3 to justify the iPad’s “media consumption machine” creds? I would advise against doing that. Bring back the era when I could plug in my $30 JBL earphones into my phone, tablet, and PC!

Let’s talk a bit about the display, too. It’s bigger this time, but it’s non-laminated. There’s a gap between the top glass layer and the display elements underneath. It feels plasticky, and there’s a noticeable flex when you press it as you inch closer to the center. I haven’t noticed such quality compromises on a $300 Android tablet from a Chinese brand.

A non-laminated display also delivers a sub-par stylus experience. You might not feel it right away, but once you experience the fluid feel of scribbling on the iPad Pro or Air, you will notice a sense of lag and trailing while sketching on the 10th-gen iPad. Also, the stylus compatibility is limited to the first-gen Apple Pencil, and the charging situation here is absolutely horrendous.

The lack of a good anti-glare coating means it’s a little too reflective, and that’s really annoying. Plus, the raw brightness output isn’t high enough to compensate for that. Moreover, it’s easy to notice the brightness shift when looking at the screen from different angles.

This could have been a great tablet

I’ve extensively used the iPad over the past few weeks, pushing it in every way I can. But despite all its goodness, the compromises and wilful omissions made by Apple keep me from loving and recommending this machine. Of course, Apple likely sold it by the bucketload this holiday season, but it’s getting harder to recommend the vanilla iPad with each passing generation.

For all its promises, Apple appears to be the 10th-gen iPad’s own worst enemy. The hardware situation can’t be fixed, but I dearly hope that Apple can redeem it in the coming months with some meaningful software-side upgrades.