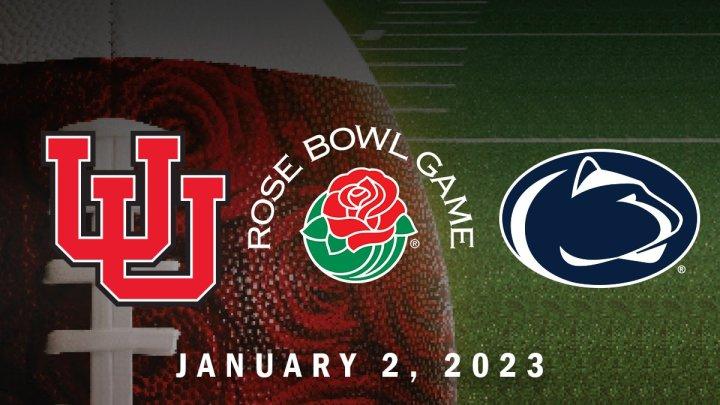 It’s time for the “The Granddaddy of Them All,” the most iconic game in the New Year’s Six, the Rose Bowl. The 109th annual Rose Bowl will feature the matchup between the No. 8 Utah Utes and the No. 11 Penn State Nittany Lions. This will be the first-ever meeting between the two schools.

Utah is riding high after winning the Pac-12 Championship against USC. The Utes are making their second-straight appearance in this game and will seek to avenge last year’s heartbreaking loss to Ohio State. On the other hand, Penn State was the third-highest-ranked team in the Big Ten. The Nittany Lions are making their first Rose Bowl appearance since 2017 and will look to end its 29-year drought without a victory in this game.

The 2023 Rose Bowl between Utah and Penn State will start at 5 p.m. ET on Monday, January 2, 2023. The game will be played at the Rose Bowl Stadium in Pasadena, California. The announcers will be Chris Fowler, Kirk Herbstreit, and Holly Rowe. According to Fanduel, Utah is favored by 2.5 points.

The 2023 Rose Bowl will be broadcast live on ESPN and ESPN Deportes at 5 p.m. ET. To watch on ESPN, check out the ESPN app and ESPN.com. Access the app or website on your smartphone, tablet, laptop, connected TV, or video game console. Log in with your cable provider for full access.

Without a cable provider, there are other ways to watch the Rose Bowl game. ESPN can be accessed on subscription live TV streaming services, such as Hulu + Live TV, YouTube TV, FuboTV, and Sling TV. Prices may vary depending on the service and package. Hulu + Live TV costs $70 per month and can be bundled with ESPN+ and Disney+. Sling TV offers Orange and Blue packages, which cost $40 per month each or $55 per month if combined. FuboTV, which ranges from $70 to $100 per month, and YouTube TV, which costs $65 per month, offer free trials so subscribers can try out the services before committing long-term.

The Utah Utes, 10-3, make the familiar trip to Pasadena for the second-straight year. The Utes are fresh off their 47-24 beatdown over USC in the Pac-12 Championship. Utah’s strength is its offense, which averages 40 points per game thanks to contributions from quarterback Cam Rising and tight end Dalton Kincaid.

The Penn State Nittany Lions enter the Rose Bowl with a 10-2 overall record. Representing the Big Ten, Penn State makes its fifth overall appearance in the Rose Bowl and will look to win it for the first time since 1994. The Nittany Lions’ offense is humming as of late, scoring over 30 points in each of their last six games.