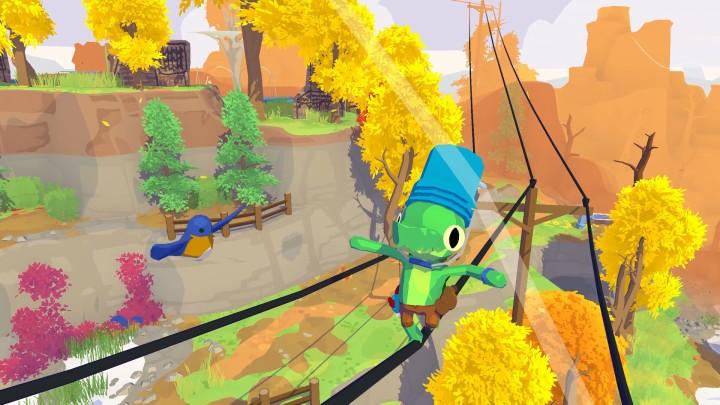 After a long 12 months, 2022 is almost over.  It’s been a busy year on the gaming side, with demanding games like Elden Ring and God of War Ragnarok eating up hundreds of hours. If you’re looking for a quick low-stakes come-down before the ball drops, Lil Gator Game is the perfect adventure for your New Year’s weekend.

Lil Gator Game is a short and endearing little adventure game that pays tribute to The Legend of Zelda in the cutest way possible. It stars a young alligator who sets out on a mini-quest to befriend as many animals as possible in a small open world. Players have to complete simple quests for potential friends, which can be as simple as fighting off a few cardboard monsters or retrieving a lost, oversized pencil.

It’s similar in structure to A Short Hike, another tiny indie adventure game starring animals, though it’s more direct and playful about its design inspirations. Early on, players get their first sword (a stick) and a shield (a pot lid) before finding a familiar “pointy floppy” hat. After a few short quests, the gator gains the ability to climb any surface and glide through the air using an oversized t-shirt — a mechanic that a frog friend pokes fun at as being from a “different game in the series.”

Everything here, from gameplay to writing, is light and sweet. The island is a soft wash of natural colors that’s relaxing to stroll around. Traversal is streamlined and smooth. Its lack of a map or quest log left me feeling a bit lost at times, but the world is compact and easy enough to get around that I was never wandering too long. Even when I was lost, I could always find a new friend to help out by completing a simple quest that was easy enough for a kid to understand

That last bit is the most important part. Lil Gator Game is a “kids game,” but I don’t mean that it’s “a game for children.” Rather, it’s an adventure game that lets older players see the world through the eyes of a kid. It transports me back to when I was young and goofing around on the playground: a stick became a sword, a simple task became a quest, and a friend became a valuable ally in whatever imaginary battle I was fighting. Lil Gator Game captures that youthful energy, where the world is just one big playground.

If you’re looking for a good game to play with your kids, or simply want to understand their perspective, Lil Gator Game is a breezy three-hour adventure that charms with silly and sincere writing. Everyone could use more good-natured games that are just about making friends and spreading kindness — adults included.