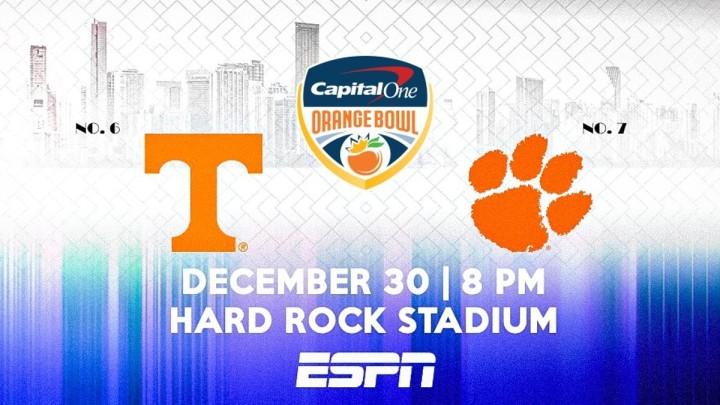 The New Year’s Six will kick off with the 2022 Orange Bowl between the No. 6 Tennessee Volunteers and No. 7 Clemson Tigers. The New Year’s Six represents the top six bowl games of the college football season. The Orange Bowl, in particular, is the second-oldest bowl game behind the Rose Bowl.

Tennessee and Clemson had national title aspirations midway through the season as both teams started the season 8-0. Ironically, they both suffered their first losses of the season on November 5. The Orange Bowl will mark the first meeting between the two schools since 2004, when Clemson defeated Tennessee 27-14.

The 2022 Orange Bowl between Tennessee and Clemson will start at 8 p.m. ET on Friday, December 30. The game will be played at Hard Rock Stadium in Miami Gardens, Florida. The announcers will be Joe Tessitore, Greg McElroy, and Katie George. According to Fanduel, Clemson is favored by 5.5 points.

The 2022 Orange Bowl will be broadcast live on ESPN and ESPN Deportes at 8 p.m. ET. To watch on ESPN, check out the ESPN app and ESPN.com. Access the app or website on your smartphone, tablet, laptop, connected TV, or video game console. Log in with your cable provider for full access.

Watch Tennessee vs. Clemson on ESPN

How to stream the 2022 Orange Bowl

Without a cable provider, there are other ways to watch Tennessee take on Clemson. ESPN can be accessed on subscription live TV streaming services, such as Hulu + Live TV, YouTube TV, FuboTV, and Sling TV. Prices may vary depending on the service and package. Hulu + Live TV costs $70 per month and can be bundled with ESPN+ and Disney+. Sling TV offers Orange and Blue packages, which cost $40 per month each or $55 per month if combined. FuboTV, which ranges from $70 to $100 per month, and YouTube TV, which costs $65 per month, offer free trials so subscribers can try out the services before committing long-term.

The Tennessee Volunteers come into the Orange Bowl with a 10-2 record, the most wins they’ve had entering a bowl game since 2001. Tennessee started the season 8-0, highlighted by a 52-49 win over Alabama. However, star quarterback Hendon Hooker tore his ACL in the 63-38 loss to South Carolina, so backup Joe Milton will start the game for the Volunteers. This will be Tennessee’s first appearance in the New Year’s Six.

The Clemson Tigers enter Friday’s matchup as the ACC champions with an overall record of 11-2. Despite double-digit wins, the Tigers have looked vulnerable many times this season due to inconsistent quarterback play. Quarterback Cade Klubnik, who took over for starter DJ Uiagalelei in the ACC Championship Game, will start for Clemson. The Orange Bowl marks Clemson’s seventh appearance in the New Year’s Six, the third-most of all time behind Ohio State and Alabama.