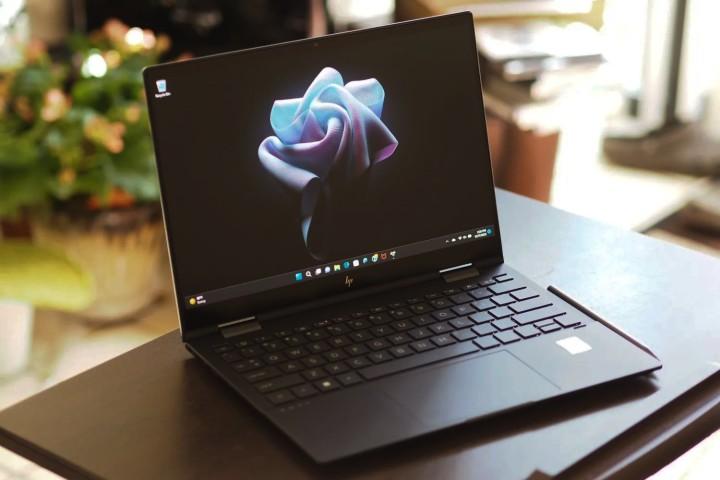 We love the HP Envy x360 13 convertible 2-in-1 for its excellent build quality, awesome display, and fine performance and battery life. It’s a hard laptop to beat, especially with a starting price of $700.

Enter the Asus ZenBook S 13 Flip, and 2-in-1 that’s similar to the Envy in many respects. But it’s also $500 more fully configured. Is it worth the extra money?

The Envy x360 13 is available in Natural Silver and Space Blue (we reviewed the latter), while the ZenBook S 13 Flip is available in Refined White and Ponder Blue (the only color available in the US). Put them side by side, and you’d be hard-pressed to tell the difference. They’re both minimalist designs with simple lines that look like many other 13-inch convertible 2-in-1.s And that’s okay because they’re both attractive laptops.

They’re both also built well, with no bending, flexing, or twisting. This is unusual, in that the ZenBook is made of a magnesium-aluminum alloy that in many other laptops isn’t as rigid (while still being strong). Asus did a remarkable job of making the ZenBook as solid as the all-aluminum Envy. The hinges on both worked well, too, opening easily while holding the display in clamshell, tent, media, and tablet modes.

Both laptops had excellent keyboards, with good key spacing, large keycaps, and a consistent feel, but the Envy x360 13’s was a bit snappier and more precise. Both touchpads were smooth and accurate and the Envy’s enjoyed quiet but confident keyclicks. The ZenBook’s touchpad buttons were far too stiff, though, and very uncomfortable to use, although the addition of the NumberPad 2.0 LED numeric keypad is a nice touch. The touch displays on both were responsive and supported the included active pens. Both laptops were fine for inking.

The laptops were very close to each other in size, with similar display bezels around 13.3-inch 16:10 displays. The ZenBook was much lighter at 2.43 pounds versus 2.95 pounds, and a bit thinner at 0.59 inches versus 0.63 inches. That made it more comfortable to use as a tablet.

Connectivity was almost identical, with the Envy enjoying one extra USB-A port, but both were well-equipped for 13-inch machines. Wireless connectivity was up-to-date on both.

Finally, both had high-resolution webcams that were great for videoconferencing, although HP built in a few more features. Both have infrared cameras for Windows 11 Hello support via facial recognition.

The Envy x360 13 uses 9-watt Intel 12th-gen U-series CPUs, and we reviewed with the Core i7-125oU with 10 cores (two Performance and eight Efficient) and 12 threads. That’s theoretically significantly slower than the 28-watt Core i7-1260P in the ZenBook S 13 Flip with the same number of cores and threads. As it turns out, the ZenBook was indeed faster but not by all that much. It pulled furthest ahead in our multi-threaded CPU-intensive Handbrake and Cinebench R23 benchmarks, but the differences aren’t radical.

Both will feel about as fast in demanding productivity tasks, and neither will be great for hardcore creativity workflows.

As mentioned above both laptops are about the same width and depth but the Zenbook is considerably thinner and lighter. It’s easier to use in tablet mode, but you won’t notice the difference as much when using either laptop as a clamshell.

Battery life favored the lower-powered Envy x360 13 by about an hour in each of our benchmarks. Given the almost equal performance, that extra hour of battery life is a plus in HP’s favor.

Almost equal in every way, except price

In terms of their designs, build quality, performance, and display quality, there’s little to differentiate these two laptops. The Envy x360 13 gets slightly better battery life and it has a better touchpad, but that’s about it.

The big difference, though, is in the price. The Envy can be had for just $700 with a nicely configured machine for productivity users, and at most you’ll spend $1,100 for a very well-configured laptop. The ZenBook is only available in a configuration that’s $500 more than the most expensive Envy, and there’s nothing to justify the increase in price. The Envy x360 13 wins this shootout.