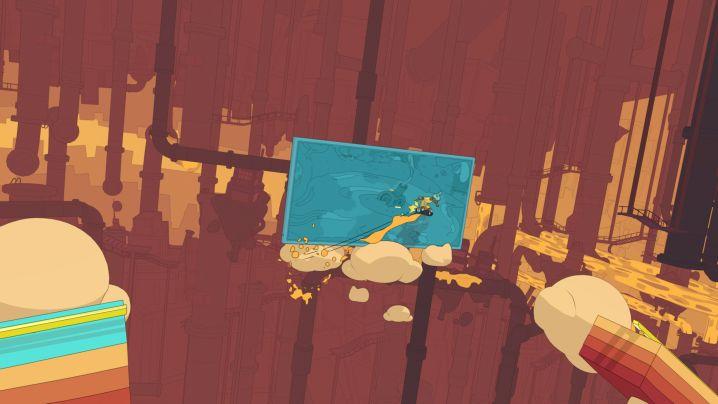 Sports games are one of the most ubiquitous genres in gaming, as NBA 2K, Madden, and FIFA top sales charts every year. These franchises also happen to be some of gaming’s most stagnant as their developers and publishers tend to focus on minor tweaks and changes year-over-year rather than significant innovations. The disappointment of games like Madden NFL 23 gives the genre a bad rap, but 2022 was actually one of the best years for sports games in a while. That’s thanks to games that were willing to get weird.

Of course, the multi-million dollar mainstay sports franchises aren’t going anywhere. That said, games like OlliOlli World, Rollerdrome Cursed to Golf, Windjammers 2, Roller Champions, What the Bat? and even Nintendo Switch Sports pushed the limits of what the genre can do. Sports inherently translate into solid video games, but this year highlighted how those games can go a step beyond, becoming kookier than what’s possible in reality. That helped breathe some life into an otherwise stale genre.

When looking back at 2022, there are a lot of sports games worth calling out outside of the usual suspects. Nintendo Switch Sports is the hallmark casual sports game from this year, giving people an accessible and motion-control-based way to play golf, badminton, tennis, bowling, chambara, soccer, and volleyball with Nintendo’s signature first-party visual flair. Though that was one of the more high-profile twists of the genre, indie developers led the charge, allowing the sports genre to shine this year.

Roll7’s OlliOlli World, for instance, is one of my favorite games of the year. Skateboarding games have been a sports gaming mainstay since the 90s, but OlliOlli World realizes that formula in a way that’s as fulfilling to play as Sonic the Hedgehog’s best games. At its best, OlliOlli World is a colorful, fast-paced 2D platformer where each level has multiple paths that accommodate various player skill levels.

It’s not trying to have accurate physics or recreate iconic real-world locations. Instead, it crafts its own vibrant fantasy world where everything is based on skateboarding, and the gameplay gives players enough wiggle room to experiment and possibly fail with flashy tricks. Roll7 didn’t stop there, also delivering Rollerdrome, a game that combines score-based rollerblading with shooting to create an action-sports game mix players didn’t know they needed.

Playing sports can give you an ultra-focused adrenaline rush, and a game like OlliOlli World and Rollerdrome can achieve that same flow state through gameplay. Meanwhile, other games interpret sports in a brand new way outright.

Ubisoft’s Roller Champions is out there turning rollerblading into a team-based competitive game about scoring points in a small goal. Windjammers 2 reinterprets ultimate frisbee as an extremely intense 1v1 fight where reflexes and predicting how your opponent is going to do are critical to success. Then there’s What the Bat? A VR game that replaces your arms with baseball bats.

What is a sports game, really?

Do all of those games I mentioned really count as sports games? I think so.

They might not be simulating a traditional sport accurately, but they are willing to get weird and explore how the video game medium can contort traditional sports. Every genre of game needs developers willing to push the limits of what that type of game can be; it’s good to know that sports games are no different.

These unique games make 2022 one of the healthiest years for the genre in a long time. Although the “sports game” moniker might immediately make you think of the likes of Madden, FIFA, and NBA 2K, they are far from the only ones out there and certainly not the ones pushing the envelope.

There are also some novel sports games heading into 2023. Nacon’s Blood Bowl III looks to provide a fantasy strategy game take on football, Devolver Digital’s Skate Story will give skateboarding a flashy aesthetic, and even THQ Nordic’s AEW Fight Forever is trying to return to wrestling games’ N64 glory days.

While the quirkier sports games might not be bestsellers like those simulation titles, some developers are pushing the limits of what a sports game can be. Focusing on reinterpreting classic pastimes and finding new ways to enthrall players in a sports-induced flow state is beneficial for the entire sports genre, even if EA and 2K don’t innovate at a fast pace.